Cadillac will race at Le Mans from 2023 - The Race
Skip to content
Prototype Series, WEC/Le Mans

Cadillac has signed up to build a top-level prototype to take on IMSA, the World Endurance Championship and Le Mans 24 Hours.

The General Motors brand has been successful in the IMSA Championship since 2017, and confirmed the Action Express and Chip Ganassi Racing teams will head up the running of the team’s LMDh entry.

Cadillac joins Acura, Audi, BMW, Ferrari, Peugeot, Porsche and Toyota as the manufacturers which have signalled the intent to build cars to either IMSA’s LMDh or the WEC’s LMH regulations, although both championships have agreed that LMDh and LMH will compete against each other in the top tier of its championships and races.

This has opened the door for Le Mans, WEC regulars to take on the prestigious Daytona 24 Hours and Sebring 12 Hours, while IMSA regulars can return to Le Mans and fight for the win outright.

“We are excited to compete at the top level of international motorsport in the LMDh class beginning in 2023,” said Rory Harvey, Cadillac global vice president.

“Like motorsport, Cadillac is making the transition into a future driven by alternative propulsion. The hybrid nature of the LMDh rules will help us to bridge our technology transfer to our all-electric future.”

“We’ve had a lot of success running the Cadillac DPi-V.R as one of the original teams since 2017, and we are looking forward to being a part of the next chapter of Cadillac Racing.” 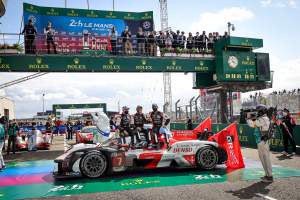 Toyota became the first manufacturer to win under LMH regulations at Le Mans by claiming victory in the blue riband event last weekend with its previously unlucky #7 car.

It faced little opposition as the only manufacturer-developed car in the class, but with the addition of a number of new manufacturers the top-tier is expected to be stacked from 2023 onwards.

Cadillac says it aims to debut its new LMDh car in January, 2023 at the Daytona 24 Hours.

Antonio Felix da Costa lost out on being part of Peugeot’s sportscar programme because of a pact between his Formula...