The FIA is launching a new electric GT category targeted at manufacturers, and offering comparable performance to current combustion-engined GT3s.

The information released so far does not specify when the new category might begin racing, but reveals that the regulations have been under development for 18 months.

While the FIA has so far been keen to avoid direct comparisons between current leading electric category Formula E and Formula 1, its announcement of the new GT format made clear the cars will race at traditional circuits and are intended to match GT3 pace.

It also made clear that significant manufacturer involvement is the aim of the new regulations.

“The cars built to this set of technical regulations will compete at full-length permanent circuits and will set new standards for electric vehicles in motorsport in terms of performance and range,” said the launch announcement.

“This innovative breed of cars will operate in a similar performance window to the current generation of GT3 cars but will exceed their combustion engine-powered counterparts in areas such as acceleration and qualifying pace. 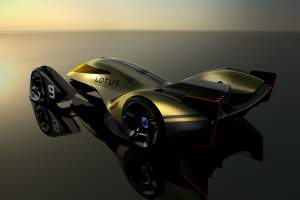 Lotus reveals jet-style concept for electric endurance racer
Read more
“The new class is based on direct manufacturer involvement, with the technical regulations prepared to achieve the right balance between permitting the OEMs to express themselves in terms of creativity and developing cutting-edge technology, while at the same time preventing cost escalation.”

Conversion of existing GT3 models to electric spec for the new rules will be possible, and battery development will be open. Maximum power is intended to be 430kW.

Battery cells will be provided by the Total-owned Saft firm to “allow the manufacturers to build their own bespoke battery layouts based on Saft-supplied cells”.

The announcement added: “The cells were designed to allow for 700kW peak regen and 700kW fast recharging that will enable them to replenish to 60% of their capacity within a few minutes during a mid-race pitstop”.

FIA technical director Xavier Mestelan Pinon made clear the degree to which the rules had been designed to give manufacturers an appealing way to develop electric technology in motorsport.

“The role of electric propulsion in automotive industry is ever-increasing, as we want motorsport to be relevant to our industry, more and more competitions are going in this direction,” he said.

“The main technical challenges are battery development, battery integration in the cars and fast charging technology.

“This is crucial to the manufacturers who want to develop road-relevant technology rather than relying on standard components.

“Also, being able to utilise and adapt GT3 platform ensures that costs are under control.”

FIA GT Commission president Leena Gade added that there was “keen interest in this new category” among the manufacturers involved in GT technical working groups, and that traditional GT3 “will remain the focus of the customer racing market worldwide for the time being”.