Sep 8 2022
By Simon Patterson
No Comments

Isle of Man TT legend John McGuinness will trade two wheels for four this weekend when he makes a foray into car racing.

He’ll race at Brands Hatch in the Ginetta GT Academy, the Yorkshire-based sportscar company’s one-make series which runs alongside the British GT Championship.

The second-most successful TT racer of all time, who returned to the historic event this year after its two-year COVID hiatus, will join the 30 plus grid of identical Ginetta G56 GTA cars at the Kent circuit, after first being invited for a trial run in one of the firm’s cars at Croft last year by owner Lawrence Tomlinson. 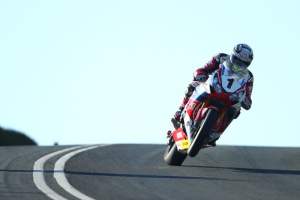 It comes following a circuit racing debut last year at Donington Park in the Fun Cup series, where he competed alongside downhill mountain biking legend Steve Peat, finishing 12th out of a field of 25.

“Following my car-racing debut in the Fun Cup at Donington Park last year, I’ve been chomping at the bit to keep racing on four wheels, so I’m really looking forward to this weekend,” said the 50-year-old rookie.

“Lawrence very kindly invited me to Croft last August to take a spin in the GT Academy car. I knew instantly that I had to race it, and where better to do so than the iconic British track Brands Hatch?”

McGuinness’ two races will be livestreamed on the Ginetta YouTube channel this coming Sunday.

The Isle of Man TT organiser has confirmed the death of Olivier Lavorel, the passenger who was initially misidentified after a fatal crash in the opening race of this year's event