What went on in MotoGP’s second Friday practice at Portimao

Nov 5 2021
By Valentin Khorounzhiy
No Comments

Newly-crowned MotoGP champion Fabio Quartararo completed a clean sweep of Friday practice sessions in the penultimate weekend of the 2021 campaign at Portimao.

Again, Quartararo and main rival Francesco Bagnaia were the two riders well clear of the competition on the timing screens for much of the session, yet with four minutes to go it was last year’s champion Joan Mir who posted the first sub-1m40s effort of the weekend, using a pair of fresh softs.

However, even though Mir found another tenth with his next attempt, Quartararo soon reclaimed the top spot a few seconds before the chequered flag – and Bagnaia then restored the status quo at the chequered flag, creating a familiar 1-2 as he lapped 0.132s slower than Quartararo’s 1m39.390s. 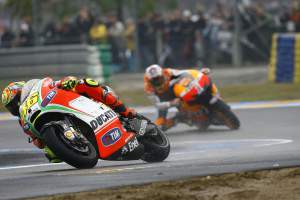 Bagnaia’s Ducati team-mate Jack Miller made it the same top three as in the morning, ahead of Mir and the leading Honda of Pol Espargaro.

The top 16 was separated by just 1.077s and didn’t feature the likes of Stefan Bradl, replacing the concussed Marc Marquez at Honda this weekend, or Miguel Oliveira, the home hero having struggled on his KTM through Friday.