Alex Rins fought off rookie Alex Marquez to score his and Suzuki’s first win of 2020, as his team-mate Joan Mir took the MotoGP points lead amid a disastrous race for Fabio Quartararo.

Quartararo, who had sustained and then exacerbated a hip contusion in a pair of practice crashes, ran second early on after starting from pole but faded horribly, finishing outside of the points in 18th.

This leaves him six points behind Mir with four races to go, with Yamaha stablemate Maverick Vinales a further six down and Ducati rider Andrea Dovizioso another three behind Vinales.

A lighting start by Franco Morbidelli meant he briefly challenged for the lead at Turn 1, but his lunge down the inside meant he ran wide and exited the corner in third place, propping up a Yamaha 1-2-3 behind Vinales and Quartararo.

Morbidelli challenged Quartararo at Turn 12 but ran wide again, with Vinales escaping out front to end the opening lap with a buffer of seven tenths of a second.

On the third lap, Rins – who had started 10th but was up to fourth almost immediately – broke up the Yamaha top-three lock-out by successfully sending it down the inside of Morbidelli at Turn 1.

He then needed little time to arrive at the back of Quartararo, and though the championship leader rebuffed his advances for a couple of laps, he finally had to yield when he ran just a little wide at Turn 12.

With Vinales unable to build on his initial seven-tenths lead, it meant Rins made short work of his advantage, too, finally clearing the poleman through the sweeping final corner on the eighth lap.

By then, the other two Yamahas had been relegated out of the top three – as Quartararo and Morbidelli ran side by side on the long back straight, braked late at Turn 16 and both ran wide, allowing Mir to pass both on the inside.

Honda rider Alex Marquez – who had battled past the likes of Dovizioso and Takaaki Nakagami early on – then made quick work of the Petronas Yamahas too, likewise joining the podium battle. 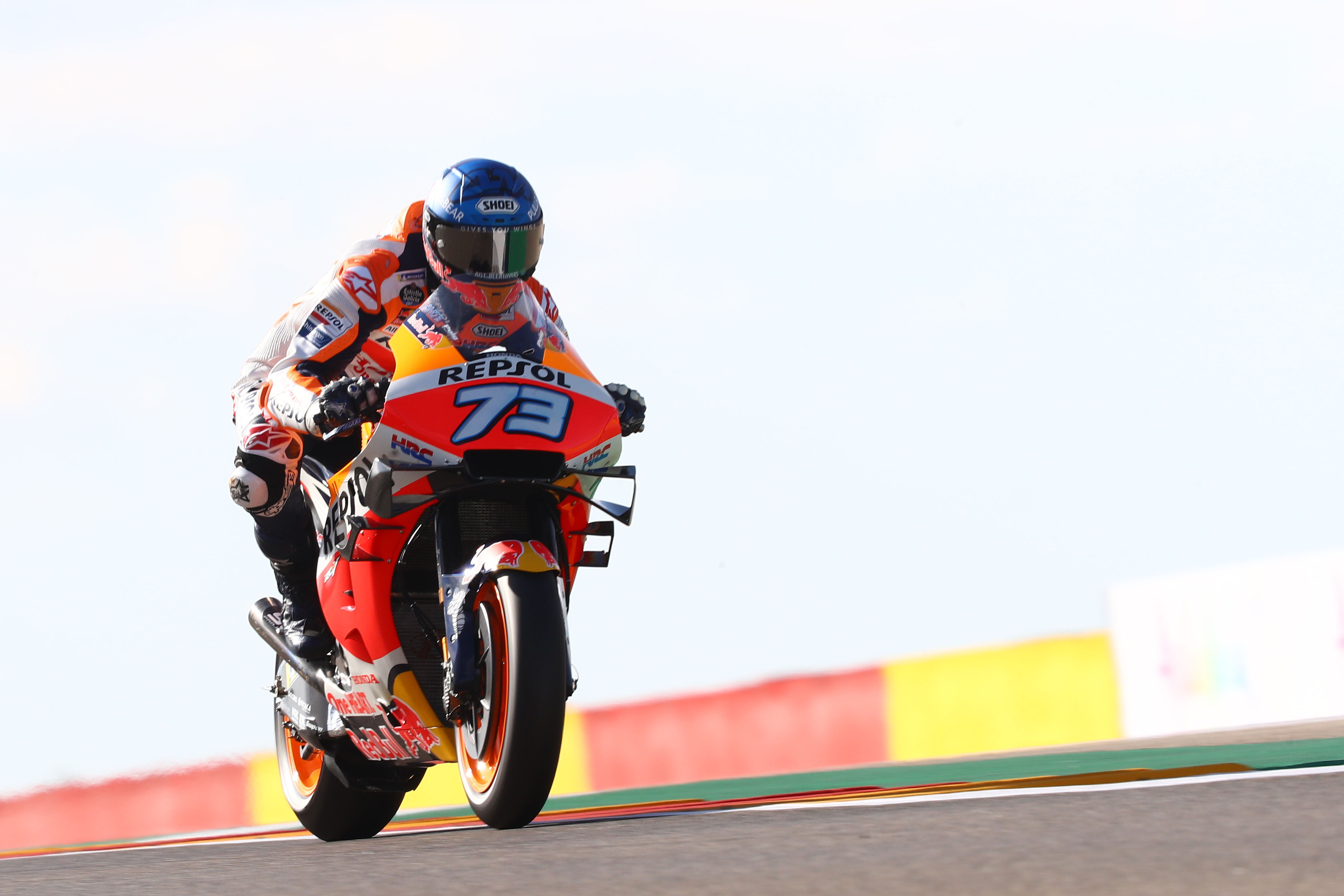 As the 23-lap race passed its halfway point, the top four was split by just over a second, with Marquez catching up to Mir and both then passing Vinales in quick succession – Mir passing Vinales through the two final left-handers and Marquez immediately pulling off a Turn 1 divebomb.

Mir held second for the next stretch of laps while keeping team-mate Rins in his sights, but he soon began to drop away from his fellow Suzuki – and with just over five laps to go Marquez took matters into his own hands, passing Mir between Turn 16 and Turn 17.

Marquez then took nearly half a second out of Rins’ lead, which put him right in the GSX-RR’s wheeltracks for the final four laps.

But Rins held firm in the face of pressure from his former Moto3 team-mate and title rival, eking out several tenths on the penultimate lap and ultimately winning by a quarter of a second.

As Marquez recorded his second consecutive podium, Mir held on to third by just two tenths over Vinales, while LCR rider Takaaki Nakagami made it two Hondas in the top five by passing Morbidelli on the final lap.

Dovizioso was the highest-placed finish to have picked the medium rear instead of the soft, fighting off late advances from LCR Honda’s Cal Crutchlow, who had started third but was relegated to 12th on the opening lap as he got swallowed up by the pack.

Pramac Ducati’s Jack Miller and Avintia Ducati’s Johann Zarco completed the top 10, with Brad Binder in 11th place leading the KTMs on what was a distinctly bad day for the Austrian manufacturer.

The only rider to crash out of the race was Pramac’s Francesco Bagnaia, hitting the deck as early as the third lap. 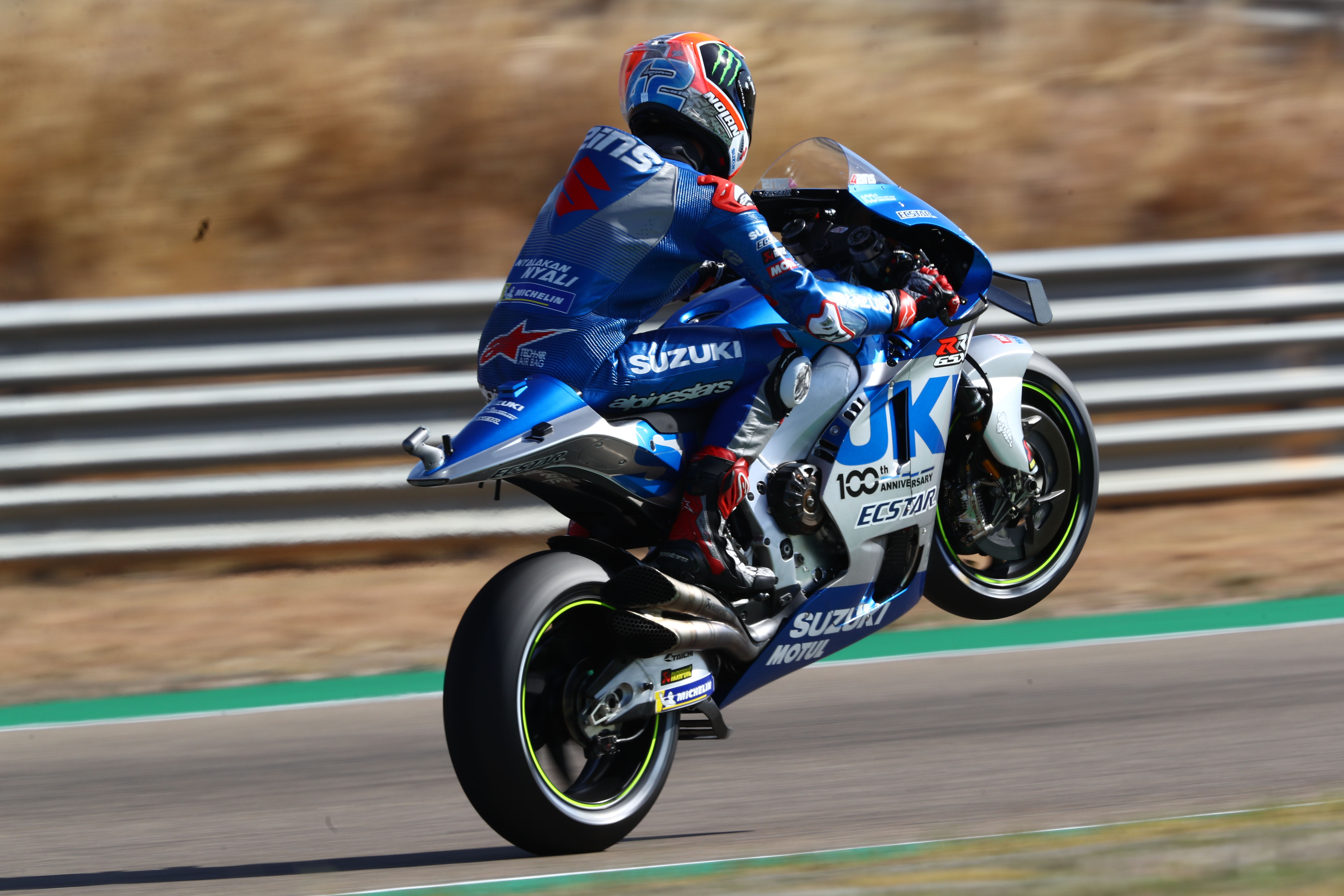