Aug 3 2020
By Simon Patterson
No Comments

The start of Aprilia’s 2020 MotoGP season was supposed to be a huge step forward for the Italian manufacturer, with a brand new and much-improved motorbike and two very fired up riders in the shape of Aleix Espargaro and recently-promoted test rider Bradley Smith.

However, the opening two rounds of the championship at Jerez couldn’t have been more of a disaster for Aprilia, with Smith finishing 15th and 12th in the two races and Espargaro ending both in the gravel.

So where did it all go wrong?

In a nutshell, the combination of track conditions at Jerez and the current situation with the 2020 RS-GP means that the two weekends of poor results came as no real surprise to Aprilia. 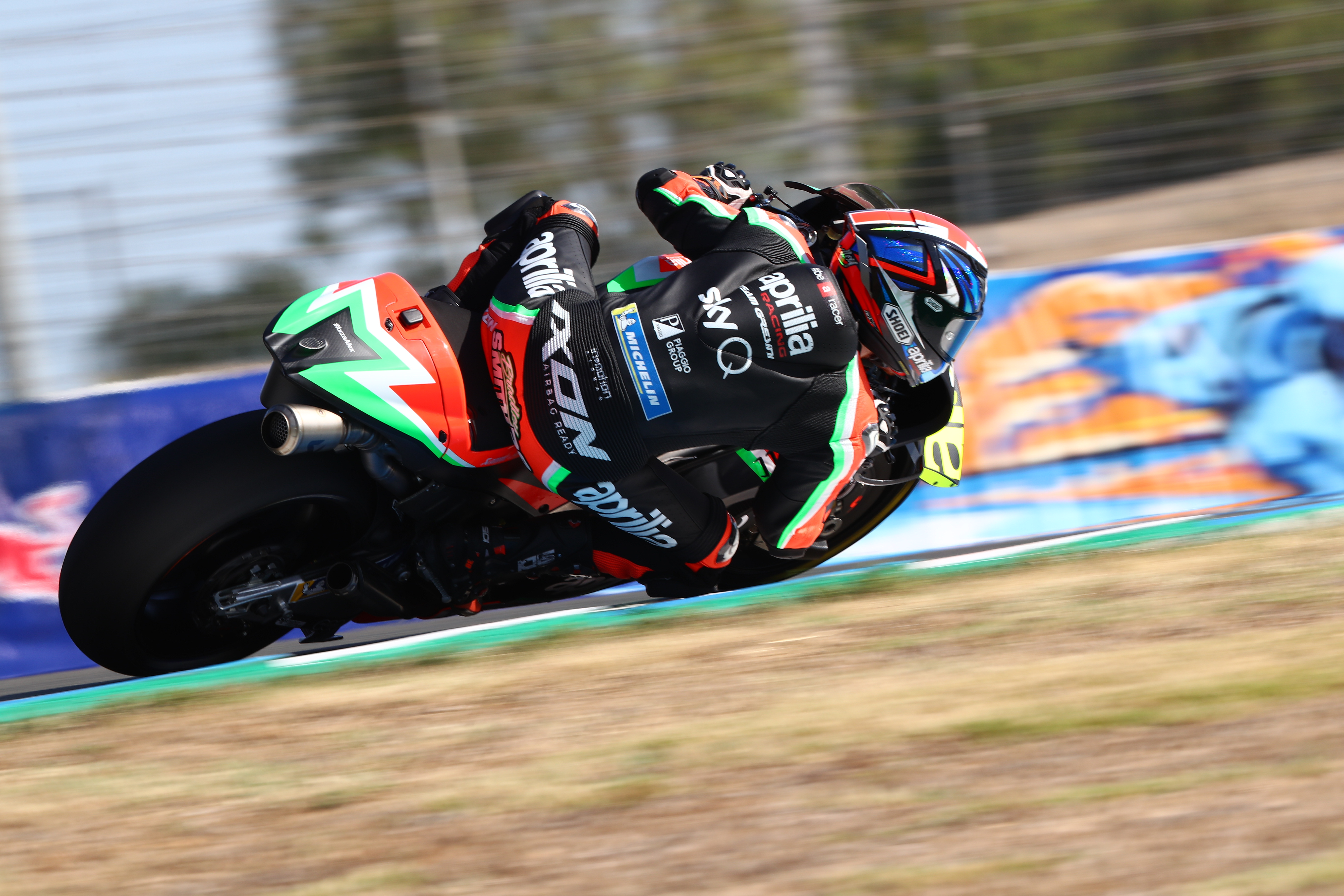 The bike it’s built for this season is stable and nimble, able to hold its own against its competitors on turning and especially on braking and corner entry – something that’s no doubt a large part of the temptation for Cal Crutchlow in signing a 2021 deal with the team.

But it’s still lacking in engine power as it continues to develop the new 90-degree V4 engine only introduced at this year’s season-opening Sepang test.

Engine problems at the pre-Jerez test may have made that issue worse, too, with engineers normally jumping to restrict RPM as the first safety measure after an engine goes pop on track.

“I feel good with the bike and like I can be competitive with it, even if that’s a stupid thing to say after two crashes out of the top 10″ :: Aleix Espargaro

With that in mind, Espargaro knows exactly why he crashed out of both races at Jerez. Having pushed hard to compensate for Aprilia’s deficiencies on a surface that had very little grip in 60ºC plus track temperatures, he admitted that fighting to get into the top 10 was a risky prospect.

“I can’t use the riding style I want because I don’t have enough power,” he explained.

“So I have to make up the time on the brakes and carry more speed in the corners, and on days like in Jerez that’s difficult. 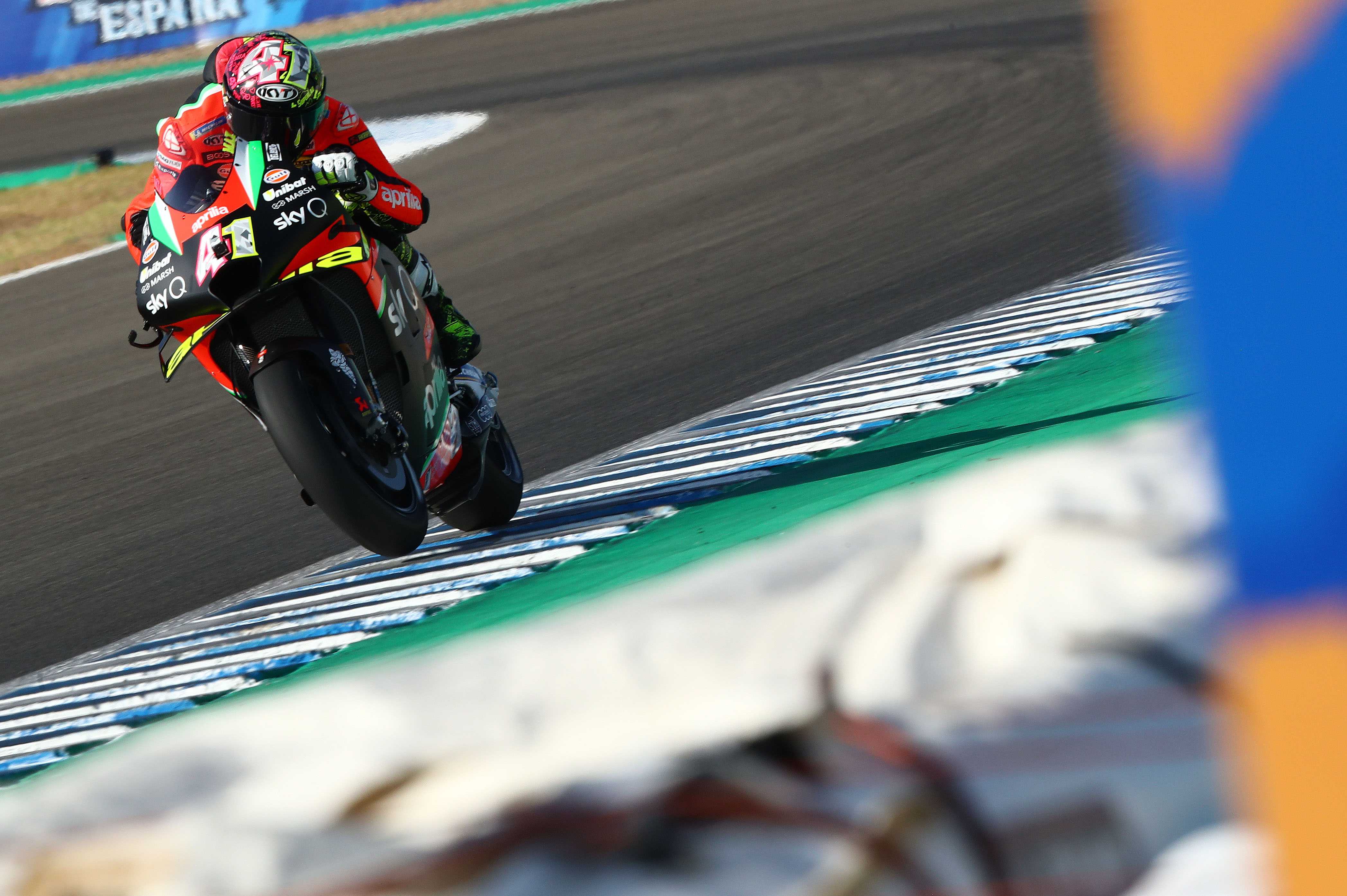 “I feel good with the bike and like I can be competitive with it, even if that’s a stupid thing to say after two crashes out of the top 10.

“You’d never think that you could feel strong after doing that, but we feel strong and we’re just missing power.

“Our bike is on the same level as our competitors apart from on top speed.”

“We haven’t found the key to our problems just yet. Maybe if we continue to throw things at it we will” :: Bradley Smith

So where does the solution to Aprilia’s current woes lie? Right now, its biggest enemy seems to be the one thing in short supply during the 2020 MotoGP season: time.

“Trust me, if we were in the situation to go testing between every round, I’d be pushing like crazy,” says Smith.

“We just need more time on the bike to extract the benefits of being a concession team – but with the schedule and with coronavirus it’s put us on the back foot. 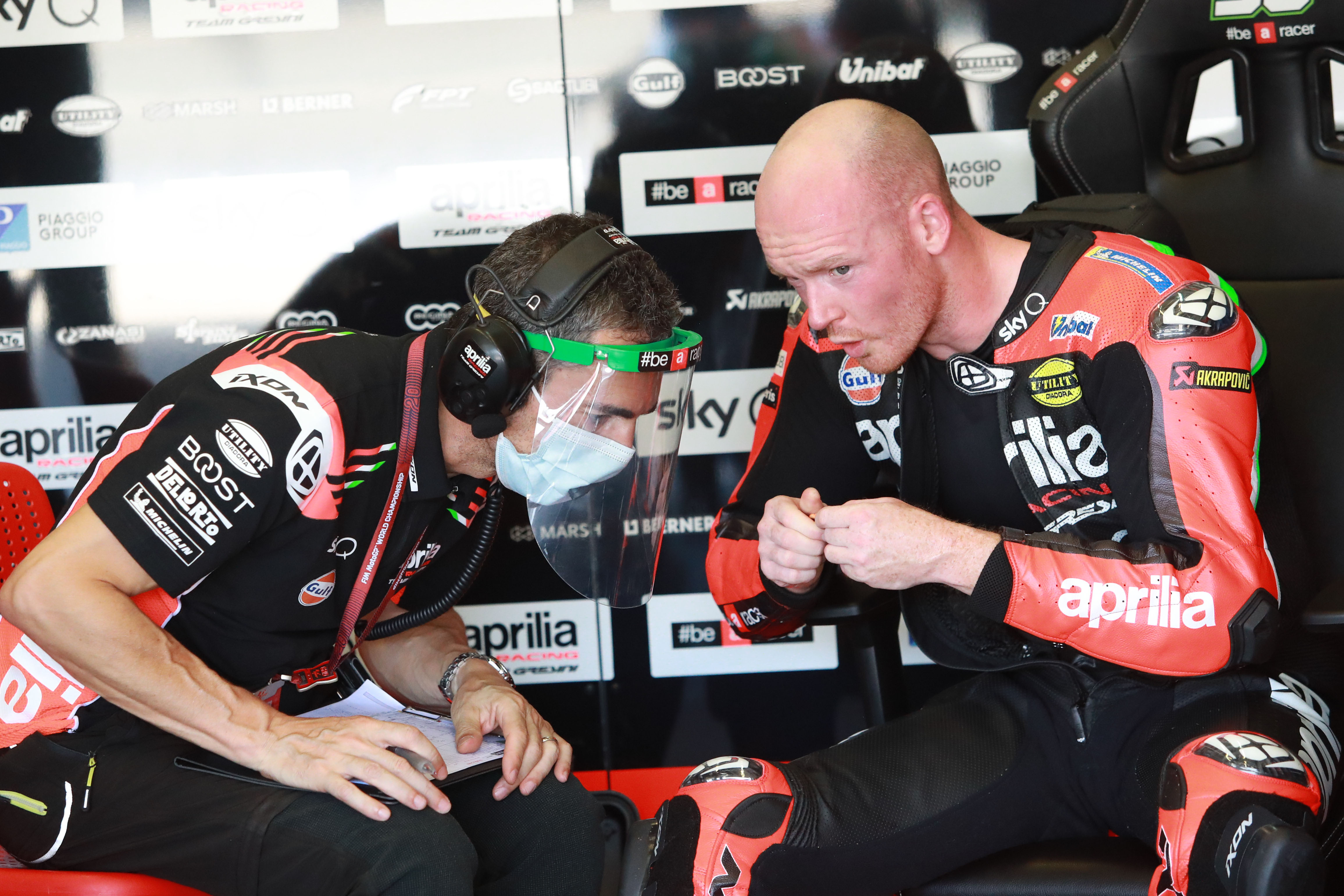 “Aleix and I are doing our best by him going in one direction and I in another to try and get the most out of it.

“We need more time and we don’t have enough of it, and with the temperature changing so much from morning to evening in Jerez it was tough.

“The struggles have to come before the good times, and I don’t want to sound so downbeat but we haven’t found the key to our problems just yet. 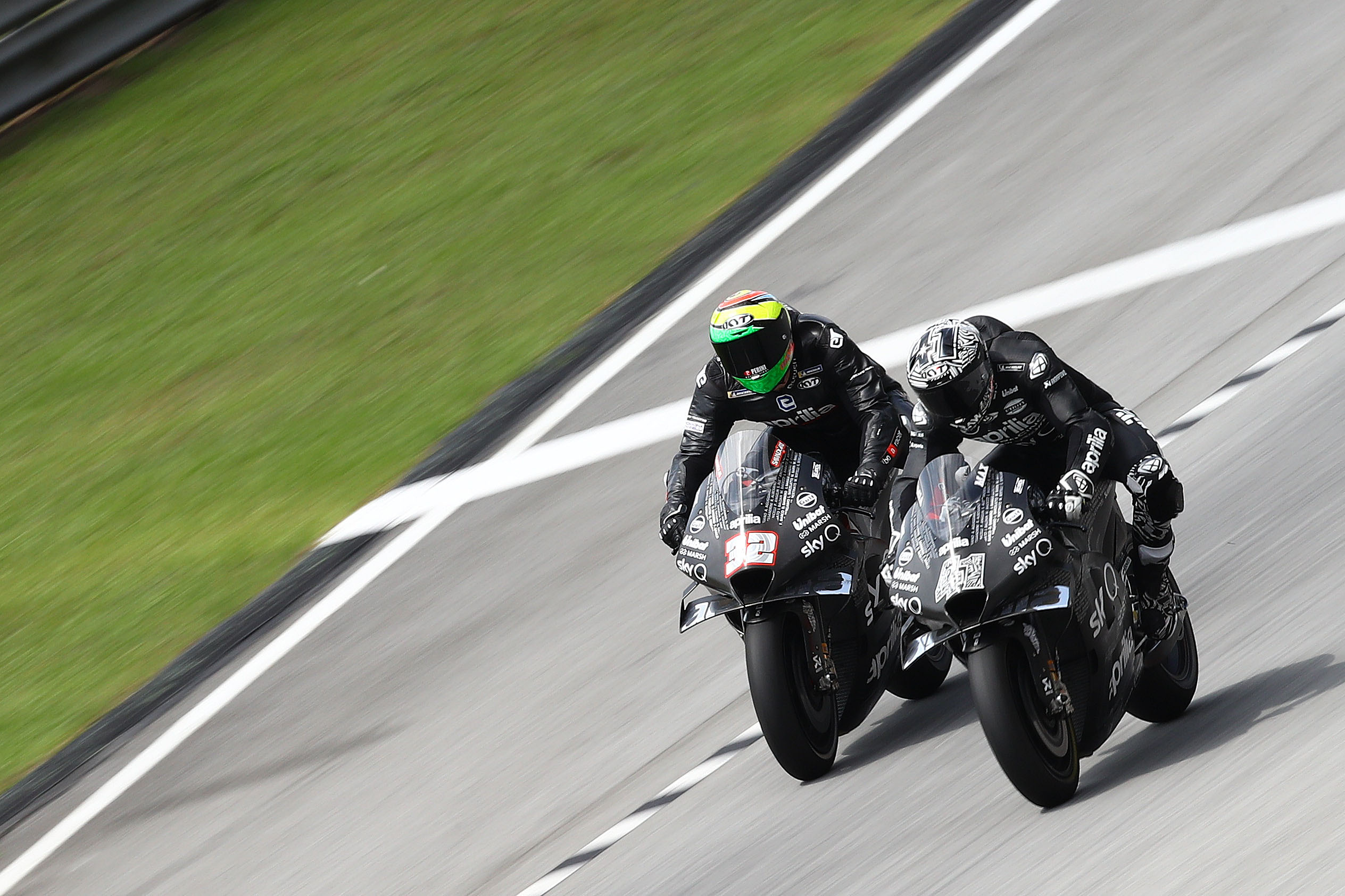 That’s going to be no surprise to hear for Aprilia’s management though, with team boss Massimo Rivola telling The Race back in February – pre-coronavirus – that time would always be a key factor in 2020 for the squad.

Rolling out the new bike only then and not at the first pre-season tests last November as most had done, Aprilia was up against the wall from day one as it continues to realise the potential of the new engine and create electronic strategies to work with it.

“The engine will be a constant evolution,” said Rivola at the time.

“When you consider the level of electronics available to us, there’s a lot to explore in that area – it’s not just about changing parts anymore even though we’ll do that a few times through the year too. 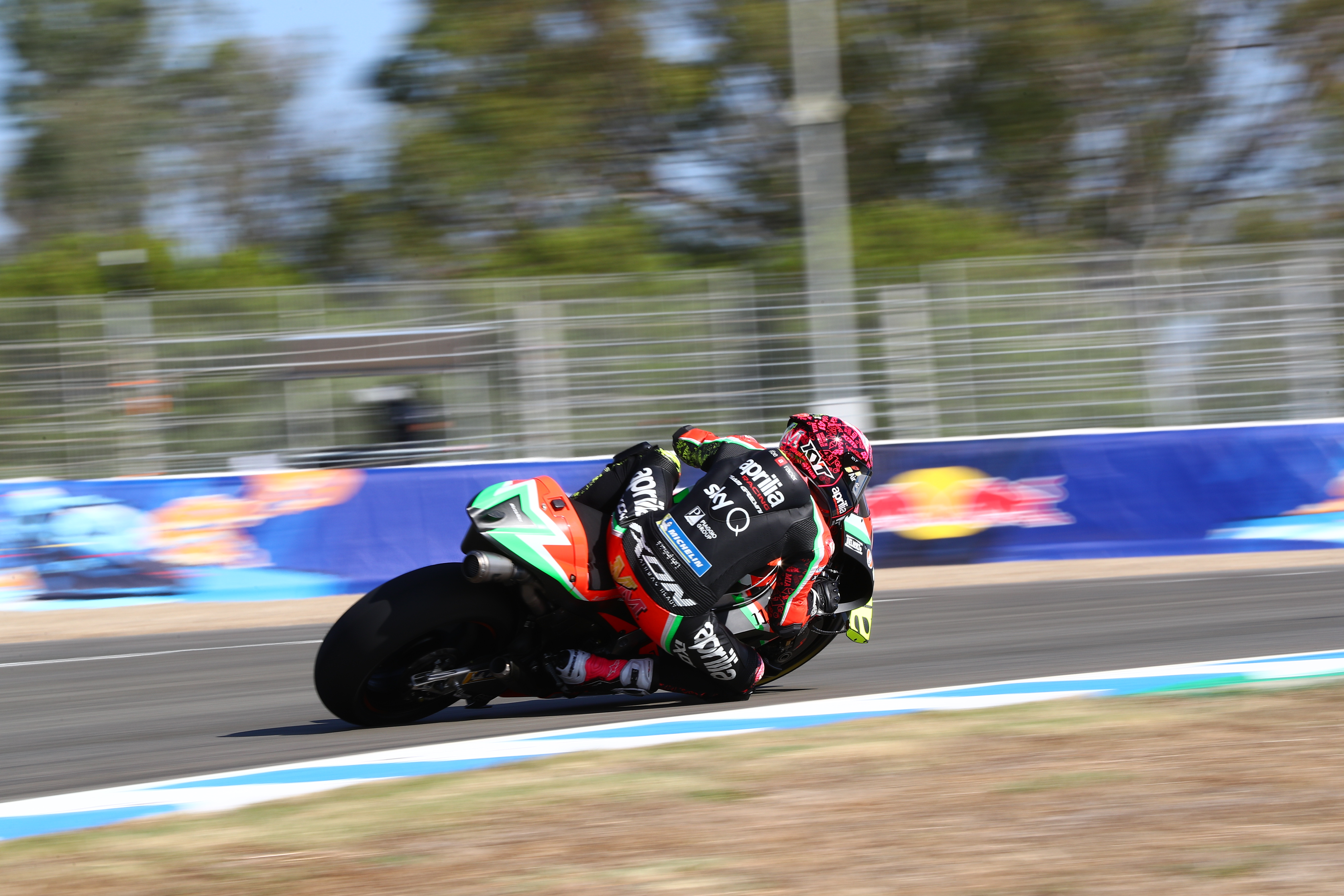 And while Aprilia still struggling for track time to continue research and development rather than chasing race results, there’s not much hope of rapid improvement in the coming weekends either.

MotoGP heads into three back-to-back races at Brno and the Red Bull Ring from Thursday, and Smith knows there’s no light at the end of the tunnel just yet.

“The guys already have some ideas in the pipeline about what they’d like to work on, and a week off will help,” he said.

“Judging by previous comments Brno isn’t one of the strongest tracks for us so we’ve got some work to do, but I’m interested to take the new bike there and see the improvements from the 2019 bike.” 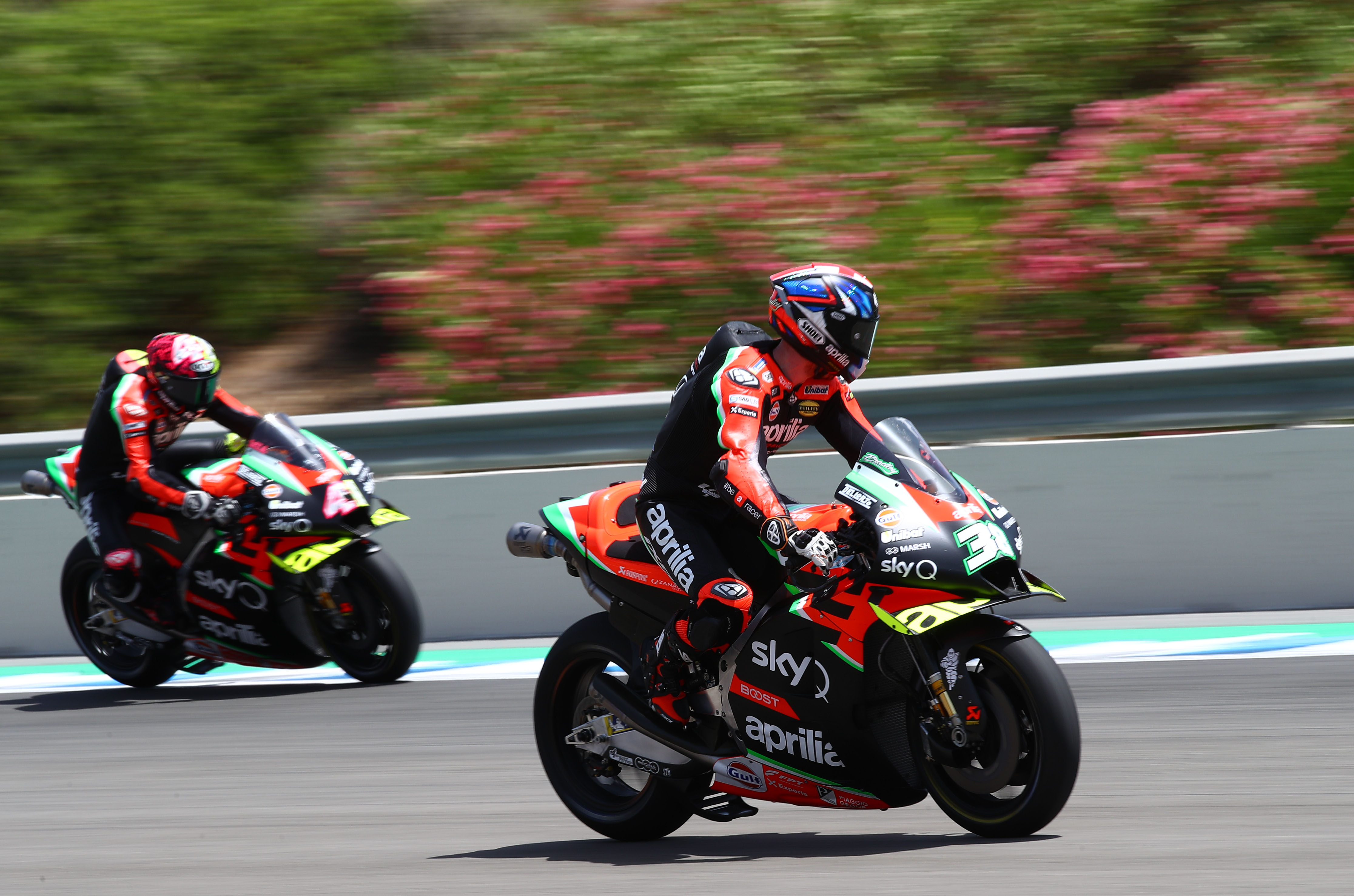