In a season that has been one of the worst on record for 2019’s dominant MotoGP manufacturer Honda, qualifying day at the San Marino Grand Prix has been one of the most miserable experiences for the reigning riders’, teams’ and constructors’ champion.

Honda’s top rider on the day was Takaaki Nakagami, who was able to take his second hand 2019-spec LCR satellite bike to 14th place on the grid for tomorrow’s race at Misano.

Stepping up to the mark as lead rider for Honda despite starting the season clearly last in the pecking order, Nakagami was the first of a bad bunch of results for a manufacturer used to winning. 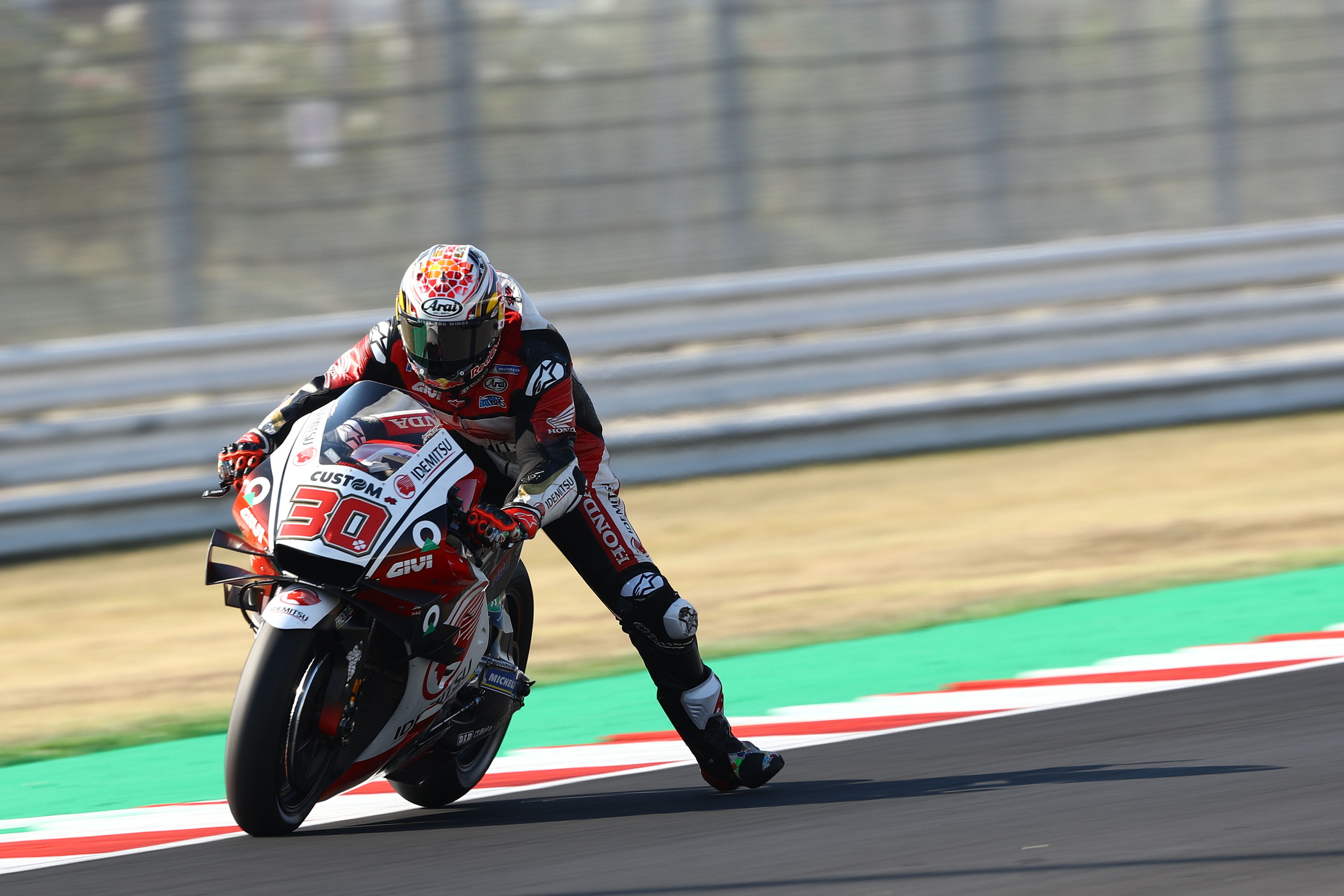 But, with a full day lost yesterday trying to tame an “out of control” Honda, Nakagami says his team’s going into tomorrow’s race with no chance of replicating his pace from last time out at the Red Bull Ring, where he had a shot at the podium and finished fourth.

“We definitely made some improvements on the bumps, changing the height and the balance of the bike to try and make it lower and to have more contact with the ground,” said Nakagami.

“I’ve still got a problem, but yesterday was out of control.

“We’re still missing on the braking. We lost all of yesterday because of the bumps, and things felt OK from the first outing in FP3 but after that you’ve only got 45 minutes with everyone going faster and faster.

“The bike is so unpredictable that it’s not easy for me to know where the limit is” :: Alex Marquez

“It’s a little bit of bad luck, because we’re not really slow, although the lap time isn’t fantastic.

“We’re not really competitive yet, and the performance needs to improve.

“I’m not happy with the feeling on the bike. Everyone’s lap times are consistent and really tight, and small details make a big difference at the end of the race.”

Things were no better in the factory garage either, with rookie Alex Marquez qualifying dead last behind Honda test rider and temporary team-mate Stefan Bradl.

Having made constant progress with the Honda over the past few weeks as he comes to terms with the hardest bike to ride in MotoGP, it was back to square one for injured world champion Marc Marquez’s younger brother. 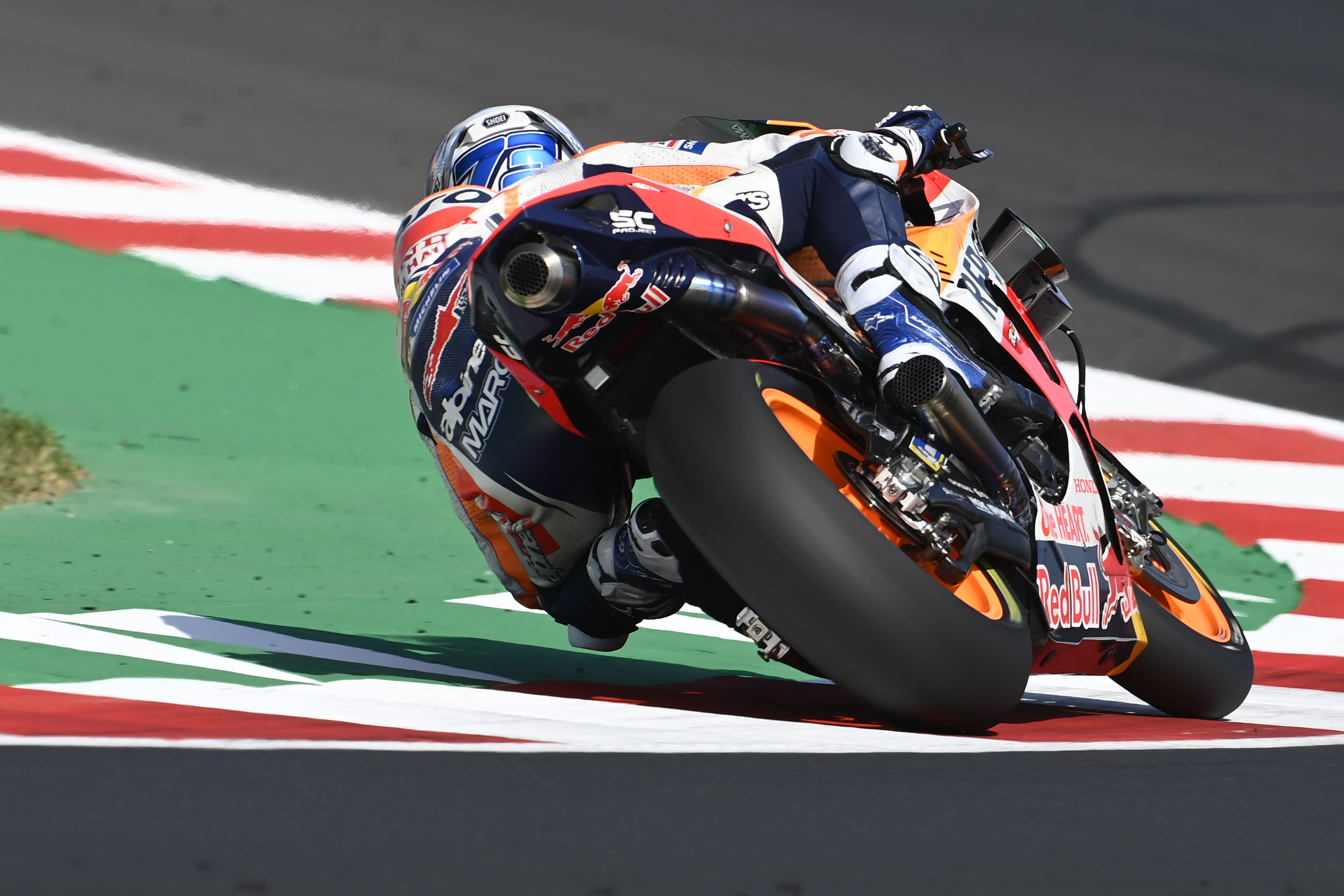 “We knew before coming here that it wasn’t the best track even if Marc won last year, because he suffered a lot against the Yamahas,” said Alex.

“I’m fighting a lot with the bike, and I wasn’t able to put everything together in one lap.

“The bike is so unpredictable that it’s not easy for me to know where the limit is.

“With the bumps, the bike is so unpredictable. It’s hard to always be in the same rhythm.

“We need to try and fight tomorrow, but I know that it’s a characteristic of the bike and just try to be more constant in the race.”

“Sewing it shut isn’t the option. I did that the other day and it made it worse, the arm blew up like a balloon” :: Cal Crutchlow

However, despite difficult days at Honda all round, the worst day of all was had by Cal Crutchlow, with the British rider unable to even complete a session as issues with his arm pump surgery brought a premature end to his weekend.

Suffering from swelling and fluid retention from the incision site where he had the entire fascia lining of his right arm muscle removed two weeks ago, he will sit out not only this weekend’s race but also next weekend’s too.

“The situation is that I have fluid on the arm and we agreed with the doctor, who was very good in the situation, that it’s not healing and it needs time to heal,” said Crutchlow. 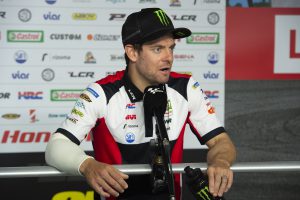 “The fluid has come now on the top of the arm, which is the clean part in the images that everyone has seen. It’s the best part, it’s the part below that’s damaged and that’s where the fluid was coming out.

“The only way to get the fluid out is with a needle, but I already have such a high risk of infection with the arm being open that the doctors don’t want to take that risk.

“They want it to heal and for the fluid to go away and the only way to do that is to stop riding.

“I’m disappointed because I felt good on the bike – probably one of the best days I’ve had on the bike all year.

“But we need to look past Misano. I want to continue to race in a good way this year and I need my arm at a good level. 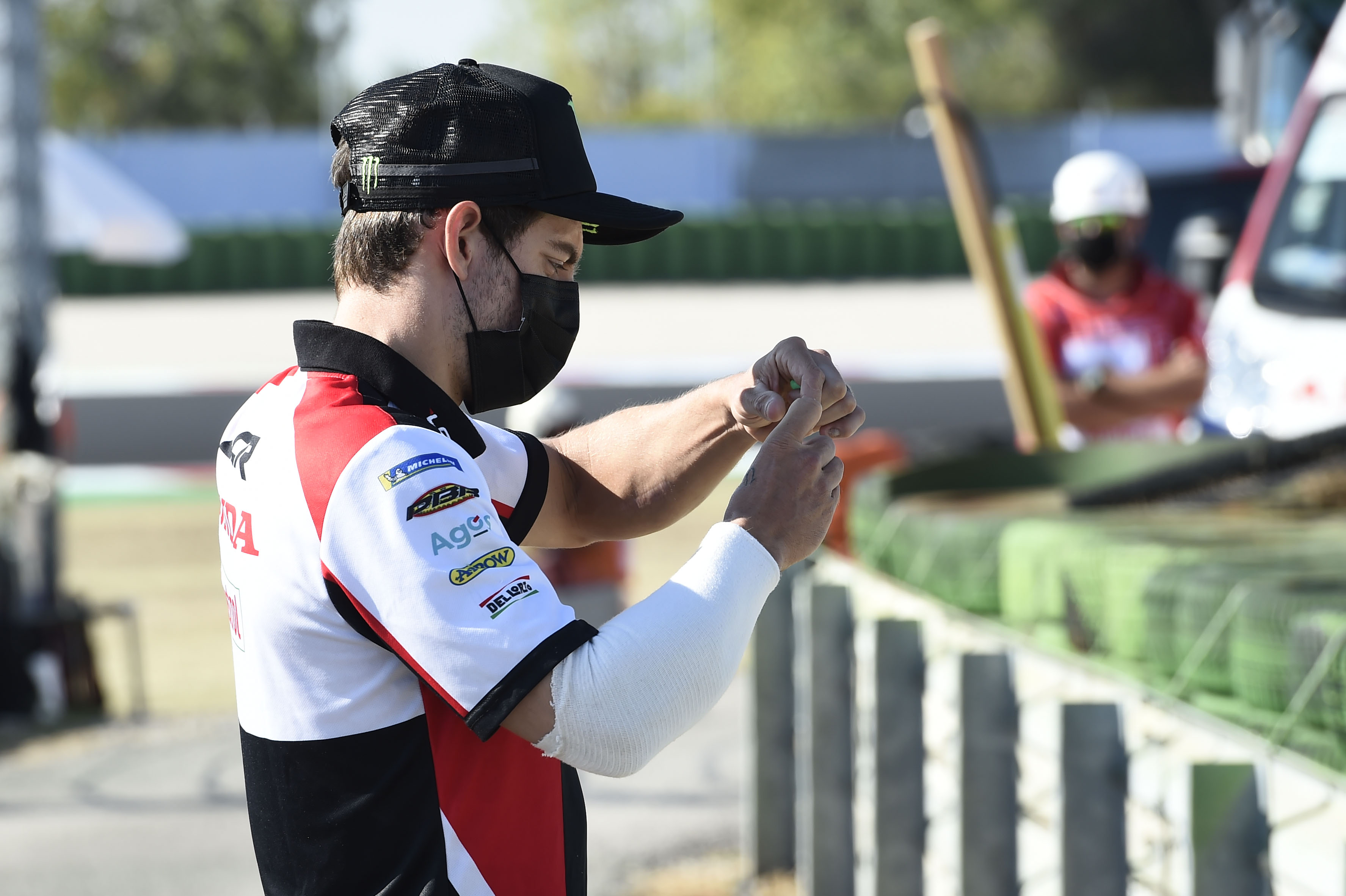 “The first plan to come back in is Barcelona [in a fortnight], to give the arm until then to recover.

“I’ll have to go and see the doctor on Monday to make a plan, because we need to get the hole closed and sewing it shut isn’t the option.

“I did that the other day and it made it worse, the arm blew up like a balloon.”

With Marc Marquez due to be out of action for at least another month as he continues to recover not only from a healing broken arm but also from the damage he sustained in his botched attempt to return to action only five days after surgery at Jerez in July, there’s no sign of any relief for Honda.

And that, unfortunately, is the crux of the today’s problem. 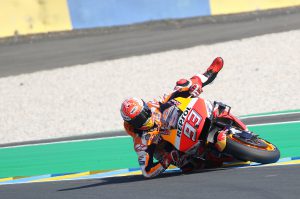 Often accused of putting all its eggs in one basket by hiring the best talents in the business and creating a hard-to-manage bike that only the supremely-talented can ride, Honda’s been caught short without Marquez.

However, that’s something that team manager Alberto Puig was his usual bullish self about, stating simply that Honda’s remaining pool of talent wasn’t good enough to extract the most from the 2020 bike.

“If Marc was here, do you think we would have a problem?” said Puig when quizzed about the poor Misano performance.

“Your question is based only on what you are seeing, but we are not using our full potential of our riders maybe. That is my understanding of it.” 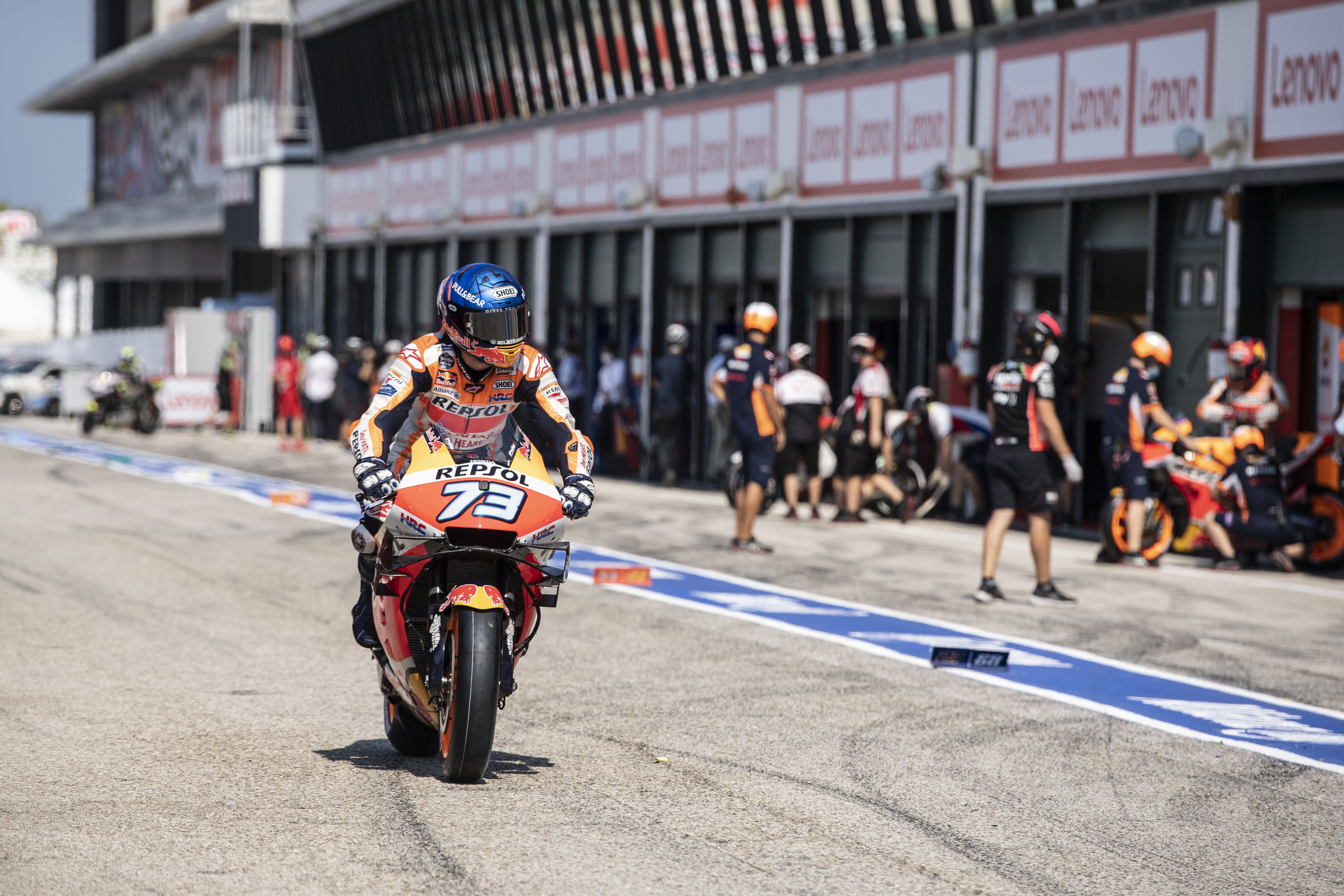