Has MotoE proved the doubters wrong? - The Race
Skip to content
MotoGP

Has MotoE proved the doubters wrong?

When MotoGP series organisers Dorna announced the introduction of an electric racing support series for 2019, the news was met with the usual derision from many fans. Generally considered slow, heavy and boring, electric motorcycles haven’t had the same market penetration as their four-wheeled counterparts – and that was reflected in the response to Dorna’s announcement.

However, as the second season of the MotoE World Cup concluded last weekend at the French Grand Prix, critics have been largely silenced by what has rapidly evolved into some of the best racing of a MotoGP weekend and a fiercely competitive series.

Italian rider Ferrari went into the final round four points clear of Dominique Aegerter in second, but thanks to crashes and on-track incidents, Torres’ race one win gave the Spaniard the opportunity to push through for the title.

That’s representative of the whole nature of MotoE, too, with the series producing spectacularly close racing so far; of 2020’s seven races, four of them were decided by only a few tenths of a second.

That’s something that series bosses were aiming for since they first started planning the championship, according to MotoE Cup Director Nicolas Goubert. 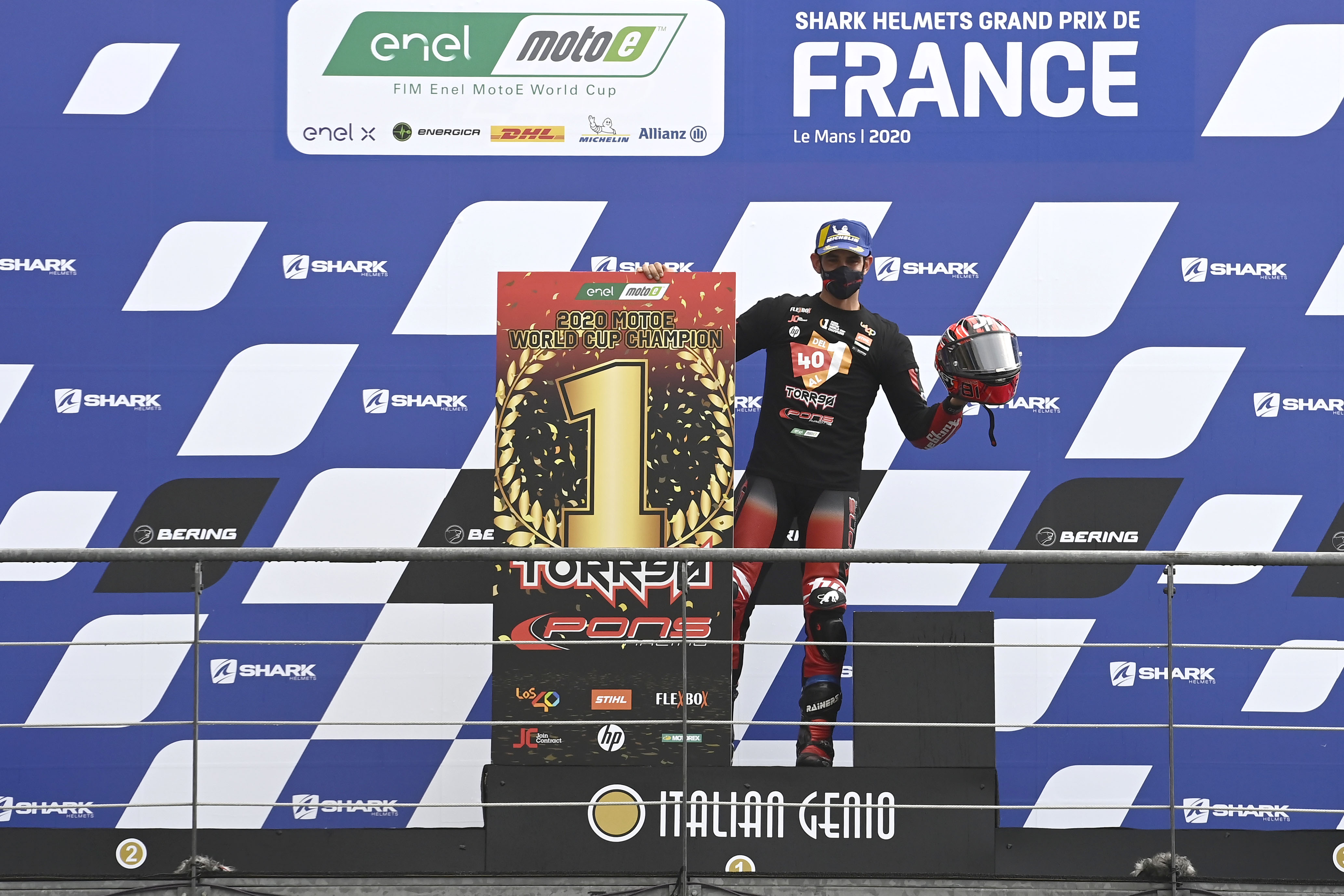 “One of the objectives at the beginning was to prove that electric racing can be very similar to petrol racing, and we took a very different path to Formula E to do that,” Goubert, the former boss of Michelin’s MotoGP efforts, told The Race in an exclusive interview at Le Mans.

“There, the cars have an economy of 100% and they make the races 102% long to ensure that the teams, the engineers and the drivers get the very best out of them.

“We didn’t want that at all, so our races are 98% of the bike’s economy, to make sure that not a single rider has to think about the power left in their batteries. We wanted the races to be proper bike races. That’s been part of the early success of the season.”

It marks a spectacular rise from the ashes – literally – for the series, after the start of last year’s season was delayed due to a devastating fire during testing at Jerez that meant the entire self-contained paddock burn to the ground.

Delaying the start as control-bike provider Energica was forced to start from scratch in building twenty bikes, the fact that the series was able to return to action so quickly and so strongly is testament not only to the people involved but to the quality of racing that it has produced.

Key to that has been Energica. Only a small Italian company but nonetheless one that’s proven its ability to develop and react, they’ve done a stellar job so far.

“They’re only a small company, a start-up, but they’re used to making quite a few bikes of a similar quality and we thought we shouldn’t have reliability problems with them – and up until now we haven’t had a single technical problem,” adds Goubert. 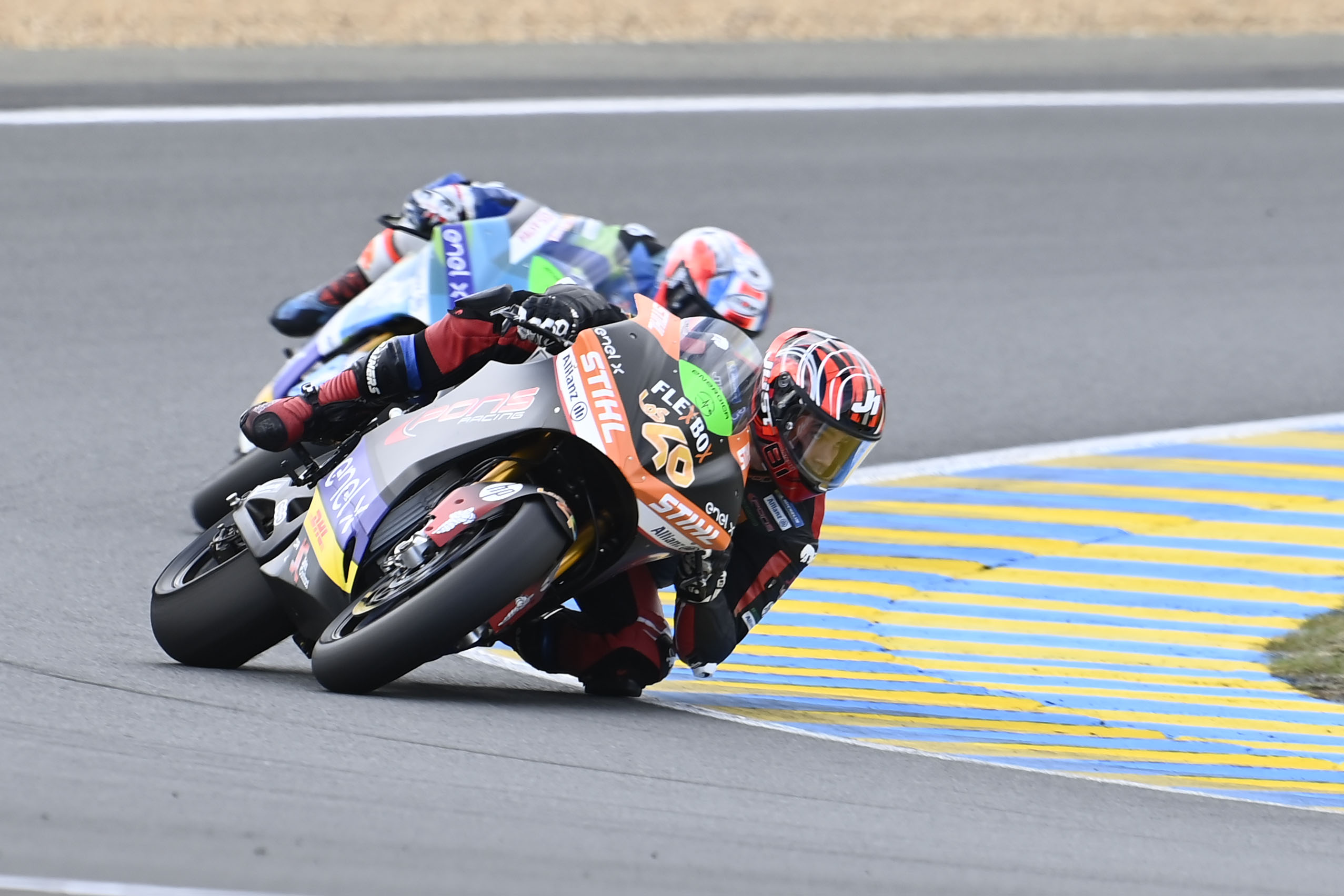 “We made quite a big step from 2019 to 2020 if you look at the performances: the only track we’ve been to twice is Jerez and we gained something like one and a half seconds per lap. So for next year the bike package won’t change too much.

“We feel like the teams can find more performance out of the bikes, though. Often they set their fastest lap of the weekend during the race, which means that there’s still performance to find in qualifying. Energica is working on evolutions, but they’re in the north of Italy and they’ve lost time during the pandemic.”

Energica isn’t going anywhere any time soon, either. Signing a new deal that keeps it as the control supplier of bikes until at least 2022 last weekend, Goubert told The Race that until established manufacturers step up, there’s no motivation for Dorna to open up the series.

“Formula E opened it up quite early to other manufacturers, but even when everyone was running the same package you had brands involved because they wanted to work on cars for the street,” Goubert says. “They were very smart and it went very quickly.

“But here it is very different, when you look at what is happening on the street. You don’t have any of the major brands except Harley Davidson coming up with real electric options, so it’s too early to think about it.

“You hear, here and there, that some are thinking about it, but it isn’t something they’re going to market any time soon.”

While the 2021 bikes won’t be radically different, there are interesting changes coming to the MotoE infrastructure that will have an important impact on races.

It will make them longer.

“We’ll have a small and portable one that teams can use in the pit lane and on the grid.

“Right now the teams have 30-minute sessions but the bike runs for 15 minutes, so with the new charger in 10 minutes we’ll gain one or two laps, which is quite good. It’ll be the same on the grid, so we can charge after the sighting lap and the races can be one lap longer.”

However, there’s an even bigger step also coming next season that won’t just make the series more competitive but will produce substantial improvements in its other goal of becoming greener. Currently powered in part by environmentally-unfriendly diesel generators, Goubert says that next year that will change.

“Right now, to charge 20 bikes at the same time you need a lot of power and unfortunately that’s not available at most tracks, so what we have to do is run on biofuel generators,” he says.

“But from next year the new generation of chargers will be equipped with a battery, so when we arrive at a track on a Tuesday we’ll plug them in and ask for only a small amount of power to charge the battery – then use that to charge the bikes, like a capacitor. Each charger will have a solar panel too, and we expect to run two out of the 18 bikes from that.” 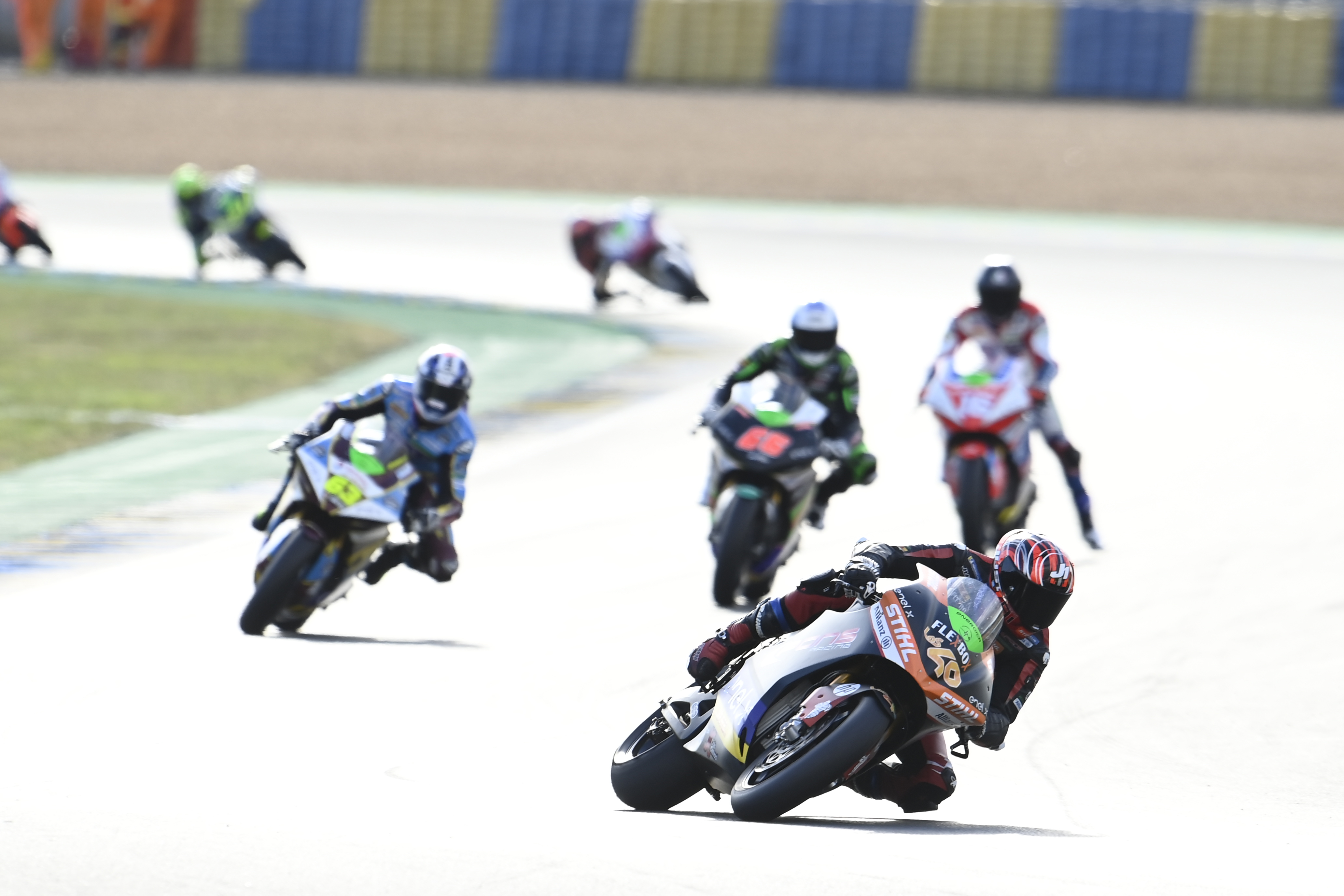 There are also environmental benefits coming from the development of Michelin’s tyres, too. The tyre company is using “raw material with a certain percentage of recycled material”, and Goubert is delighted with its collaboration with his former employer too.

That’s all healthy news for a championship still finding its feet despite considerable opposition, as it sets out to silence the critics and convert them into fans. But while there’s still plenty of room to grow, Goubert is adamant of one thing: MotoE will remain as a counterpart to MotoGP and not a replacement for the foreseeable future.

“It’s really difficult to try and predict what will happen in five or 10 or 20 years’ time,” he says. “We’re convinced that we’re going to have electric series alongside petrol series for many years, but we don’t know what format that is going to take.

“Today it’s an electric motor with a battery, but tomorrow will it be an electric engine powered by hydrogen? The engine has a lot of advantages compared to petrol – it’s a lot more simple, it costs less, it’s more efficient. The only thing is how you get the energy to it, whether it’s storing it or making your own.

“What we are sure is that it will live alongside petrol engines for many, many years. We’re going to continue to grow the series, to keep our eyes open to see what is happening in the marketplace, and to see what happens; we are only at the starting point still.” 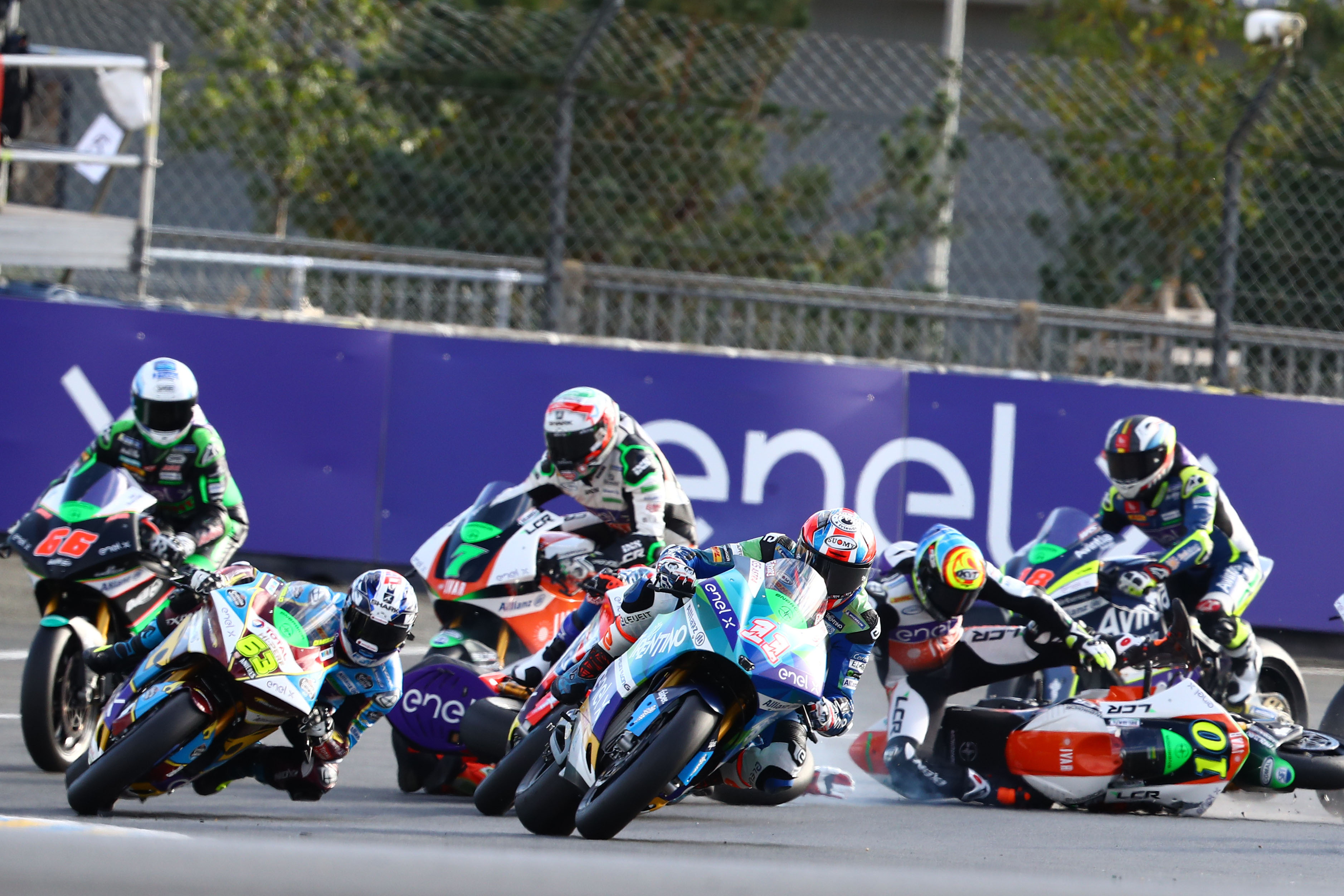