Aleix Espargaro has been diagnosed with a heel fracture following his monster high-side during final practice at MotoGP’s British Grand Prix on Saturday.

The Aprilia factory rider crashed at the Turn 12 left-hand Farm curve during FP4 and had to be stretched away to the side of the circuit. 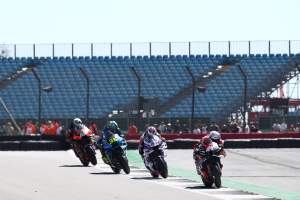 He underwent a medical assessment and incredibly returned to his bike for qualifying an hour later and claimed sixth place on the grid.

Espargaro battled bruising on his way to finishing ninth in the race, directly behind his chief title rival Fabio Quartararo and less than four seconds adrift of race winner Francesco Bagnaia.

Espargaro returned to Spain following the Silverstone race and received further medical checks at the Dexeus Hospital in Barcelona – the go-to medical treatment facility for most of the MotoGP grid.

His injury was spotted after initially being missed by the medical team on Saturday, a common occurrence due to the immediate swelling after a crash.

“Aleix Espargaro has been diagnosed with a heel fracture in his right foot,” a short statement from Aprilia read.

Huge high side for @AleixEspargaro

We hope he is ok but he's leaving the track by stretcher #BritishGP 🇬🇧 pic.twitter.com/gmq0d0bRY8

“The Spanish rider, the victim of a frightening high-side during the last free practice session at Silverstone, then stoically took to the track for both qualifying and Sunday’s race.

“The injury does not require surgical treatment, and Aleix has been prescribed seven days of absolute rest during which he will have to use crutches in order not to strain his injured foot.

“The aim is to arrive at the next race weekend in the best physical condition.”

That’s likely to mean that the biggest hurdle ahead for the ultra-keen cyclist is going to be staying still, with Espargaro one of the fittest racers on the MotoGP grid thanks to his obsession with cycling.

MotoGP returns to action at the Red Bull Ring in Austria on August 19-21.