Pagenaud comes from last to victory in Iowa opener

Penske’s Simon Pagenaud came from last to first to end Chip Ganassi Racing’s 100% record in the 2020 IndyCar season in the Iowa Speedway opener as a dramatic crash tested the aeroscreen.

Last year’s Iowa winner Josef Newgarden – who’s taken two poles but no wins in the first four races of the season – established himself as the car to beat early on once he’d wrestled the lead from shock polesitter Conor Daly of Carlin.

But during that opening stint, strategy immediately became a factor as tactics varied from two to four stop strategies through the field – with the bespoke Firestone tyres proving high in degradation and offering huge gains for an undercut.

Takuma Sato – always a threat on short ovals – pitted much earlier than the leaders and used the powerful undercut to lead at the halfway mark. At that point, the race had run green throughout.

A spectacular crash for Will Power then brought out a caution on lap 144 of 250. Power’s Penske crew had failed to secure his front left wheel and it came loose, sending Power into the outside wall at Turn 4. The flying loose wheel then almost hit the out of control car.

.@12WillPower has been cleared after this incident.

Once Power’s wreckage was cleared, the field shaped up to restart but it was called off. However a concertina effect meant Colton Herta couldn’t avoid slowing rookie Rinus VeeKay, launching over the Dutchman’s car, briefly onto the retaining wall before coming to a rest – thankfully remaining upright the whole time.

VeeKay’s head was shielded from Herta’s wheel thanks to the new Red Bull Advanced Technologies-developed aeroscreen device, while Marcus Ericsson was also protected as a piece of Herta’s front wing was launched at his cockpit, the canopy deflecting the debris and standing up to intense duress on its first real safety test.

With a lengthy stint under yellow to clean up both incidents lasting a total of 26 caution laps, it set up an 80-lap run to the finish.

Some drivers – led by Alexander Rossi – pitted just before the caution finished, making it likely they could get to the end without pitting again while others would have to stretch to make it, setting up a fuel mileage race.

Having started last, a brilliant undercut and strong pace on track put Pagenaud into contention, as he took the lead before the previous caution as others pitted and then made his own stop under yellow.

He quickly charged through to the lead after the restart, clearing the remaining cars on alternative strategies, and then established a gap as it became clear Rossi’s car had too much oversteer to challenge.

Rossi ceded his position to Scott Dixon who – like last year – came from a lap down to compete for the win at Iowa, a track neither driver has won at before.

Dixon closed in during the last 15 laps as traffic ebbed and flowed the gap, dirty air from competitors really affecting the car’s handling.

Every time Dixon got to within eight tenths of the lead, his car would stall out and he couldn’t get close enough to make a pass on Pagenaud.

Holding on gave Penske a first win of the season, as Pagenaud himself has struggled – averaging a start of 15.5 before qualifying dead last for today’s race due to a fuel pressure problem. 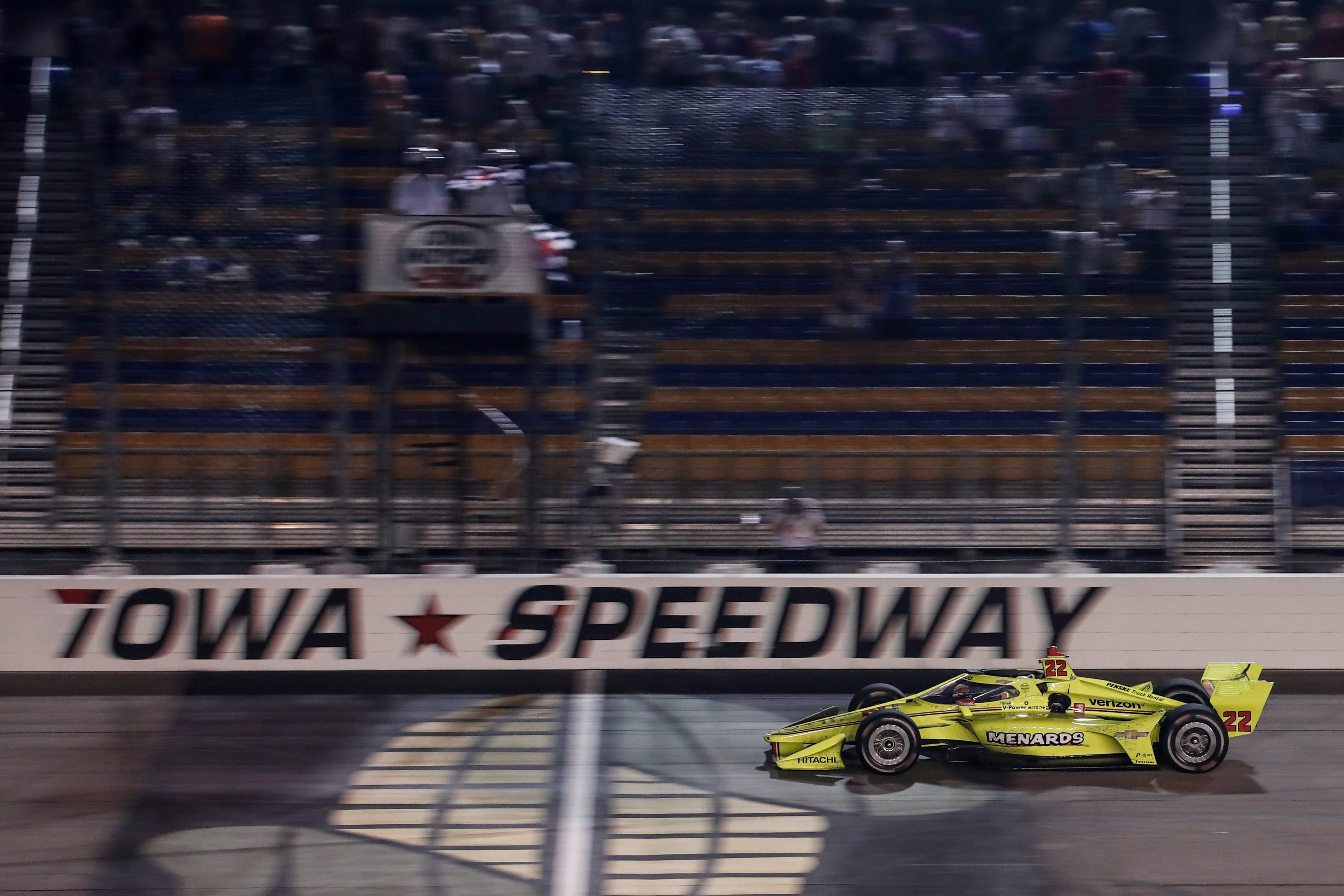 Dixon had won the first three races of the season, and his team-mate Felix Rosenqvist won the second Road America race to keep the team’s winning record in tact, until now.

While Pagenaud held off Dixon up front, impressive rookie Oliver Askew hunted the pair down having stopped during the last stint for fresh tyres. But he simply ran out of time to join the lead battle.

The Arrow McLaren SP driver – who scored a top 10 on his oval debut at Texas during the season-opener – turned a 14th-place start into a maiden series podium and the team’s second in a row after Patricio O’Ward’s second in the last Road America race.

O’Ward scorched back to fourth having also pitted in the last stint like his team-mate, battling past the late improving Newgarden.

Newgarden had fallen two laps down having pitted just before the heavy caution period but subsequent excellent strategy got him back into a top five place, as he passed Rossi late on.

Behind Rossi, Jack Harvey finally ended a run of extreme bad luck to take seventh, ahead of polesitter Daly.

Ericsson kept his brilliant start to his sophomore campaign going with another top 10, ahead of Sato, who didn’t get the luck of the draw with a strategy that could have easily allowed him to win without the heavy caution period.

Tomorrow night’s race will be led away by Newgarden, ahead of Power, Daly and Herta. 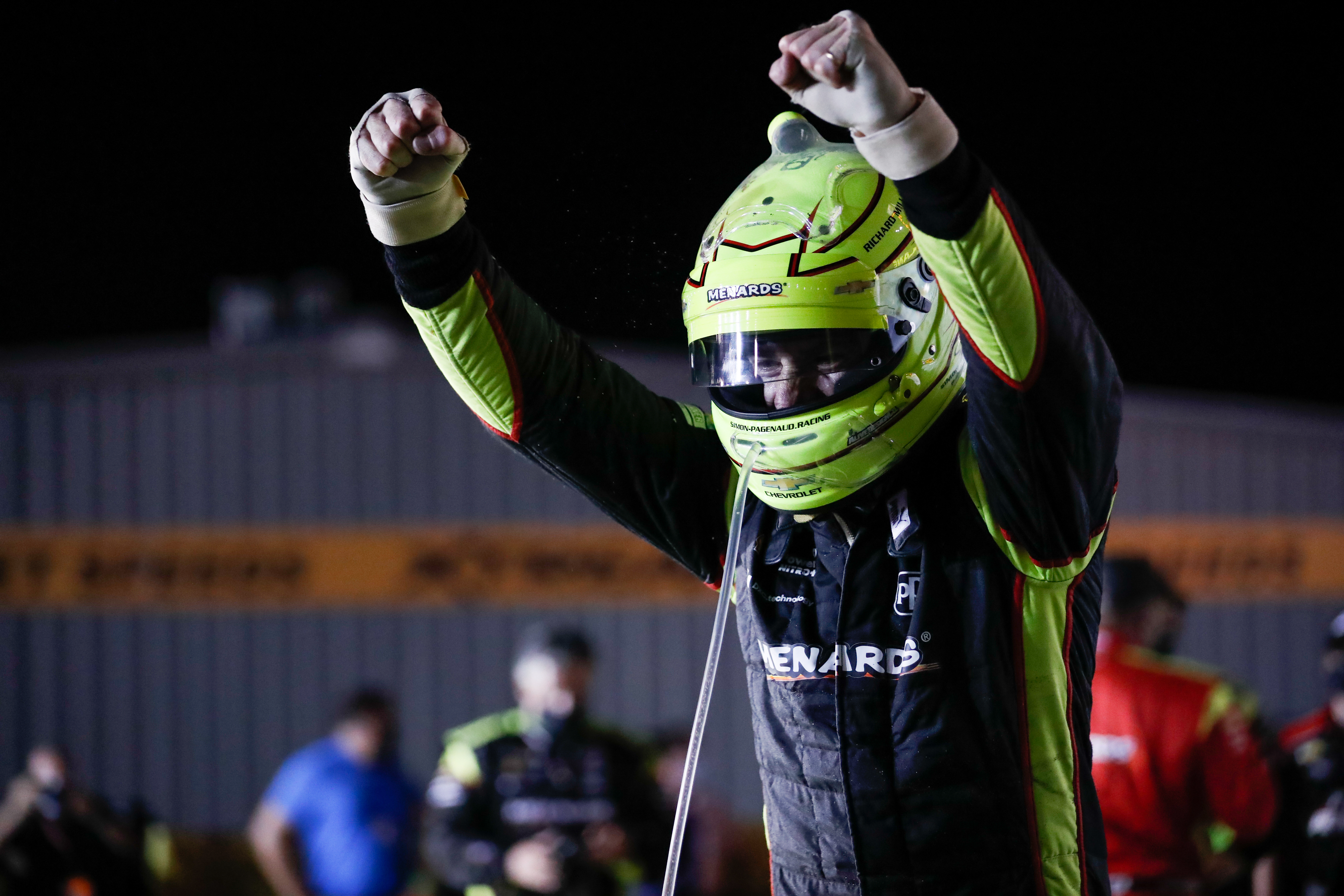