Makino was racing in only his third F2 weekend, in a car the series had added a halo to for 2018, the same time it debuted in Formula 1. At Turn 4 at Barcelona he clashed with Nirei Fukuzumi, who was launched into the air, and the latter’s left rear wheel scraped the side of Makino’s car and halo.

He’d told me afterwards that he’d never been a big fan of the device, but he’d become its biggest cheerleader after literally watching it save his life, in real-time and hopeless behind the wheel.

I’ll never forget the feeling I had when I examined the car after the race. The ‘Russian Time’ sponsorship logo had been almost entirely rubbed off, and black marks that could have wreaked death merely ruined a stunning paint job.

The marks on the halo from the Arden car. Thank goodness that wasn't the Makino's head! pic.twitter.com/bWTIxE3aIe

A life had been saved.

And for what, a piece of titanium and a load of complaining keyboard warriors. Formula 1 faced massive criticism for the look of its cars after introducing the halo, but the FIA persisted and it has possibly saved many lives since, starting with later in 2018 at Spa, when Charles Leclerc was defended from Fernando Alonso’s flying McLaren by the halo, in another incident that helped detract from those decrying the device’s introduction. Now it’s a non-story. Dare we say, people have actually grown to like the halo.

IndyCar were slower to choose and introduce its head protection device, but it was important to pick the right thing for its championship, and at Iowa on Friday night we got the perfect proof that a delay – even if it meant more lives were potentially risked as it ran without a device in 2018 and ’19 – to its decision could easily save more lives in the future.

That’s a fair few points to address, but it’s passed all of them apart from the looks debate, really. You can read more about its features and the background in our feature from after Texas.

Heading to IndyCar’s shortest oval and the second on the calendar after Texas, Iowa was likely to prove a test with its fast and compact nature. The first shot in the dark came as the wheel(s) of Will Power’s victory charge fell off – literally, his tyre changer didn’t secure the front left wheel properly. Having lasted for a lap or so, the wheel detached from the car at exit of Turn 4 sending Power into the outside wall at speed. As his car cannoned back into the middle of the track – his detached wheel flew through the air. 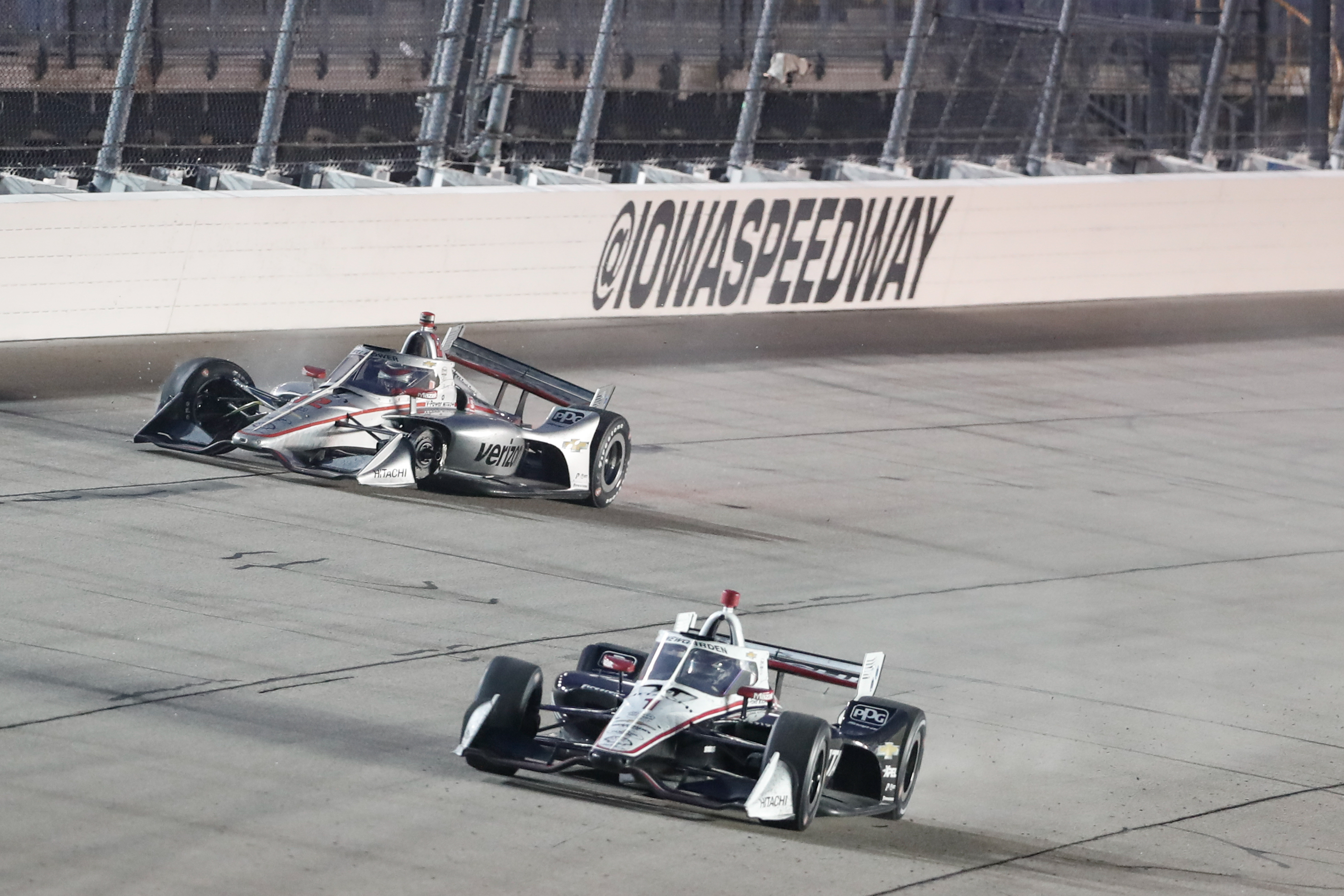 While it didn’t hit the car, it proved a reminder that crashes on ovals can be extremely dangerous indeed.

“Man, I can’t thank IndyCar enough for everything they’ve done safety-wise with the aeroscreen and halo inside the aeroscreen,” said Power afterwards. “They’ve just done a tremendous job.

“It’s better than any other series that have invented something like it. Just a very good job.”

On the restart once Power’s car was cleared though, we got the true test of the aeroscreen.

Colton Herta wasn’t told the restart following the caution for Power’s crash had been called off, and as the cars bunched up in front of him, Herta couldn’t avoid the slowing rookie Rinus VeeKay in front.

Herta was launched over the back of VeeKay, his nosecone clipping the left-hand side of the aeroscreen, which could so easily have sent Herta’s car into VeeKay’s head.

Herta bounced on top of the retainer wall but landed on his wheels and luckily he was unhurt as the cars behind missed his out of control wreckage. The same for VeeKay, who was also cleared from the medical centre like Herta not long after the incident.

Take a moment to watch the footage before reading on. Amazing.

Less than a year ago we could have been talking about the loss of a rising IndyCar star in VeeKay, had Herta’s car continued its trajectory without an aeroscreen to stop it.

It’s not nice to be morbid, but if there are any positives that come out of the loss of life, it’s that lessons must be learned to improve things for others; to make the world a better place; and ensure the memory of that person lives on through positive change.

Last night, I saw Dan. I saw Justin. Wheldon and Wilson respectively were both lost in crashes that – possibly – the aeroscreen may have helped to change the outcome.

Those great drivers may well have been with us today, or they may have not. But if I had a time machine I’d sure as hell get an aeroscreen on in both cases to improve their chances. Stefan Wilson – an IndyCar driver in his own right and Justin’s brother – tweeted shortly after the incident.

Also, so relieved #INDYCAR has the aeroscreen, my stomach always drops seeing a wheel loose like that on a racetrack. This time, I felt confident the drivers were protected. Great job @IndyCar #IndyCar250s

The world wasn’t ready for the aeroscreen or halo in 2015 or 2011 – when Wheldon passed away following a huge crash at Las Vegas – but it is now. And it has to be celebrated for what it’s done. Its protection is far more important than what the car looks like.

I appreciate fans of a certain age will look back at the Coyote Ford, a plethora of March Cosworths, the Reynard 95I – the list is long – and remember the beauty before the aeroscreen ‘ruined it’.

But there’s beauty to be found in the saving of human lives. Far more beauty than a car could ever offer.

It’s been five races and I’ve grown to like the look of the current IndyCar with the aeroscreen. It looks unique, mean at the front end and sleek from the side profile. Sure, it’s unusual, it’s one you may or may not ever enjoy. But we have to appreciate it for what it is. A lifesaver.

Both VeeKay and Herta were a little dazed after jumping out of the car, and neither discussed the aeroscreen at length. I’m sure that will come with further reflection.

However, following the race, two of IndyCar’s long-serving and most successful drivers – winner Simon Pagenaud and runner-up Scott Dixon – both opened up ion the impact it has had from a driver’s perspective.

When asked by The Race if the drivers felt safer in the car when watching incidents like that of Herta and VeeKay, Pagenaud said: “Yeah, personally that was my first thought.

“I saw two cars flying behind me pretty high. My first thought was, thank God we’ve got the aeroscreen.

“Again, I’ve been in big favour of the aeroscreen for safety.

“Unfortunately being around what happened to Justin [Wilson] was really tough, really tough for everybody.

“Obviously being there and seeing it happen was extremely hard, so I’m so glad that IndyCar is doing everything they can to be the pioneer into a new level of safety, and I welcome it.”

Wilson’s death in 2015 at Pocono was deemed a freak accident, as he was hit by debris from the crashed car of Sage Karam.

Flying debris can be a problem in IndyCar when it comes to compact ovals, as drivers have less space to avoid projectiles flying through the air where say – with all the run off on F1 circuits these days – there’s a bit more space to manoeuvre there. Everything’s confined on an IndyCar oval, and it happens quickly.

That’s part of the reason IndyCar went with the aeroscreen as opposed to the halo. The latter has two open windows either side of the main pillar which could allow debris in, while Red Bull reckons the aeroscreen canopy can withstand the weight of 22 Indycars on top of it, and it wraps around, deflecting debris away.

In the Herta and VeeKay crash, an excellent spot by the NBC production team showed a piece of Herta’s wing smashing into Marcus Ericsson’s aeroscreen, a further testament to the device’s impact. You can see the debris strike at 1:22 in the below video.

Ericsson’s team-mate Dixon was behind this crash and watched it unfold. He also played a major role in the test and development of the device.

“Yeah, I was right behind it,” he said when asked by The Race.

“It was an unfortunate incident there. I think obviously Colton just didn’t hear that they waved it off.

“But yeah, it was – just to echo what Simon said. I think what IndyCar has done with the aeroscreen, it’s made it a lot safer, made IndyCar a lot safer, made the sport a lot safer, and we’ve got to keep pushing, and it’s great to see it working as well as it has for the season.”

Incidents like this are always a mixed bag emotionally. You look back and wish that the development of this device came sooner to save the drivers who it could have saved over the years.

But you also have to use the incident as fuel, as motivation, for further improvements.

Safety – especially at 200mph – is paramount, and we’ve never done enough to make things safe. We owe the quest to Wilson, to Wheldon, and to all the other drivers where there was a chance, however minute, that they could have been saved.

There’s always more work to do, but the aeroscreen has already demonstrated its worth and given those who lamented its introduction for aesthetic reasons something to think about. 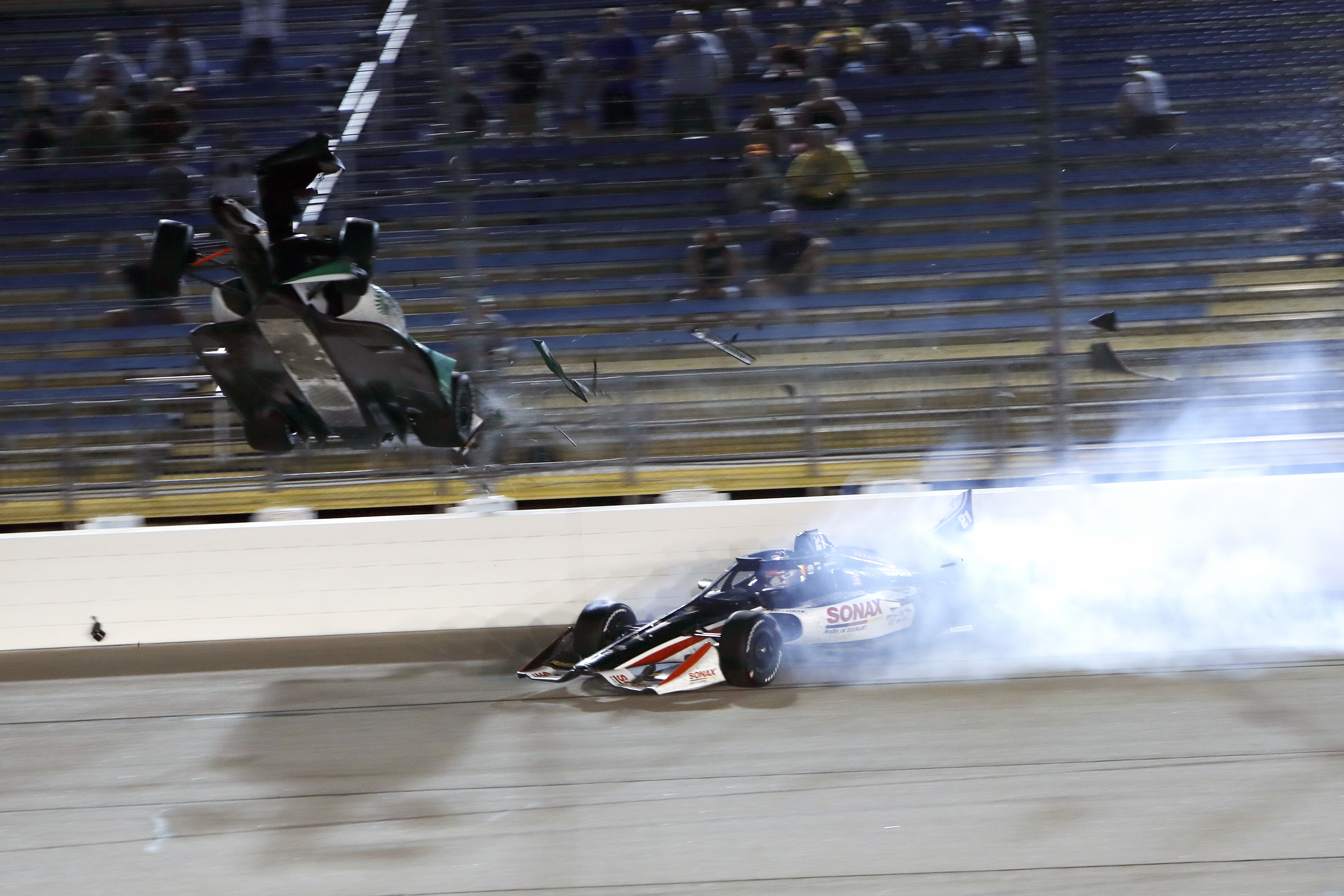