Conor Daly and Carlin took a shock first pole in IndyCar for the first race of the double-header weekend at Iowa, as Penske’s Josef Newgarden claimed race two pole position in the same session.

In a bid to reduce track time, IndyCar introduced an innovative method for qualifying. Drivers had their usual two laps, but rather than an average being taken across both, the first lap set the grid for Friday’s race one and the second lap decided the race two grid.

Carlin has gradually improved its IndyCar pace since its full-time debut in 2018, and Daly’s pair of sixths at Gateway last year and Texas at the start of this year centred on a range of improvements, including some ‘radical’ suggestions from Daly himself. 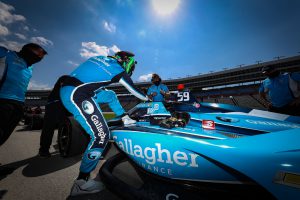 With the dampers yielding the biggest gains so far, Daly continued Carlin’s strong oval form with second in Iowa practice.

Owing to his relatively low championship position, he was one of the first 10 cars on track, but delivered a pair of scintillating tours to top the order at the tricky 0.875 mile oval.

With the heavy hitters in the championship running later in the session, Daly was pictured by NBC TV cameras crossing his fingers and arms as even a top 10 would’ve marked his best oval IndyCar qualifying performance.

He was finally usurped for the pole in race two within the last five cars, as last year’s Iowa winner and the Texas 2020 season-opener polesitter Newgarden demoted the plucky Daly despite a small slide off Turn 4.

However, Daly’s race one time couldn’t be beaten by anybody, and he starts tonight’s race ahead of Newgarden, another Penske driver in Will Power and a pair of Andretti run cars in Colton Herta and Alexander Rossi.

The top five for race two is Newgarden, Power, Daly, Herta and another Andretti car with Ryan Hunter-Reay at the wheel.

Second-in-the-points Herta’s car could be heard bottoming out on the tricky Iowa bumps despite the loud engine noise, and he had to fight his helmet air hose coming off.

But he did a fantastic job considering to claim a pair of fourth place starts while the championship leader Scott Dixon could only manage 17th and 18th for the two races. 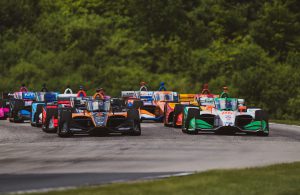 Rossi had another turbulent day. Only 18th in the points standings after a tricky start to the year, he scored fifth on the Friday grid with his first lap, but struggled with oversteer and could only manage a 21st-place start for race two with his second lap.

Simon Pagenaud’s qualifying woe continued as his Penske team-mates thrived. Entering the race he had an average start of worse than 15th, and a fuel pressure issue robbed him of the chance to even set a lap in qualifying, leaving him starting at the back for both races.

Last week’s Road America race two winner Felix Rosenqvist was the top Ganassi car in race one with seventh, but one spot behind team-mate Marcus Ericsson for race two as they took ninth and 10th respectively.

Alex Palou was the standout rookie, scoring seventh on the Friday night line-up despite being the only driver on the grid to have never raced at Iowa before. He will start race two in 18th.