IndyCar has added an extra scoop to its Red Bull Advanced Technologies-developed aeroscreen for this weekend’s Iowa Speedway races in a bid to help drivers cope with searing cockpit temperatures.

The aeroscreen – IndyCar’s alternative to Formula 1’s halo – has been well received by drivers and teams, not affecting visibility and even adding an extra layer of intrigue as teams look to adapt set-ups to deal with the added weight, which has been stacked towards the front of the car compared to last year.

However, with summer temperatures in the US proving high, and a lack of air entering the cockpit due to the device deflecting air over the car, it has led to drivers becoming increasingly uncomfortable, especially when pitting and during caution periods.

The Texas and Indianapolis races took place in temperatures as high as 30 degrees celsius, and a similar temperature is expected at Iowa this weekend – which led to Colton Herta to suggest that drivers could use IVs in this period to replenish fluids.

Iowa features the fourth and fifth races in three weekends after the Indianapolis road course then the Road America double-header, with full-length races on both Friday and Saturday nights, and no long straights on the short oval to provide a physical break for drivers.

“This [the new scoop] actually adds more airflow inside the cockpit.

“We’re excited to see how it works, knowing that it won’t be the final product.” 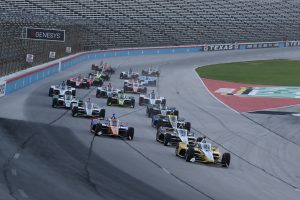 Not all teams are running it in Iowa practice so far, with some that are trying it yet to commit to using it in the races. Herta topped practice for Andretti Harding Steinbrenner, ahead of Conor Daly and Will Power.

IndyCar allowed teams to move drinks bottles in the cockpit starting from the Road America round in a bid to lower the temperature of the water reaching the driver. It had previously been described as being like “hot tea” by multiple drivers.

Moving the pouch to below the driver’s knee in the cockpit helped to alleviate that problem, while IndyCar has also added permission for a mechanic to hand drivers water bottles in pitstops.