Colton Herta claimed his fourth IndyCar pole position in a bizarre wet qualifying session at Mid-Ohio, where a number of drivers spun off and yesterday’s race winner Will Power couldn’t set a lap due to a penalty.

Qualifying was split into two groups, the fastest driver from either taking pole. After that, the drivers in the pole winner’s group will occupy the odd numbers on the grid with the alternate group taking the even side.

The value of this format was proven immediately, as the group that went first had wetter track conditions and were slower, but didn’t miss out as they would in a normal motorsport qualifying session thanks to the format.

With the medical helicopter delayed in arriving, qualifying was pushed back by 30 minutes and when cars got back on track, there were five spins culminating with Charlie Kimball stopped on track at Turn 1 to bring out a red flag.

However, there was one star of the session as Dale Coyne Racing Dallara-Honda driver Santino Ferrucci went well over a second faster than anyone, and then extended his gap to 3.2419s with his final flying lap.

He experimented with lines and found an amazing amount of time off the line of rubber laid down by yesterday’s racing to extract grip, saying: “I just love the rain, man.”

Group two featured the top two in the championship, Scott Dixon and Josef Newgarden, as well as Power – who spun almost immediately in the session and was penalised by IndyCar, not able to return to set a lap.

After Power’s car was recovered the session clock ticked down to just over four minutes – just enough time for two flying laps – but Patricio O’Ward almost immediately crashed – for the second time this weekend – this time at Turn 2.

It could be costly for the Arrow McLaren SP Dallara-Chevrolet driver who just maintained third in the championship, having fought back to 11th in the first race after his practice shunt. His closest rivals also qualified near the back in Takuma Sato and Power, 17th and 22nd respectively to O’Ward’s 21st. 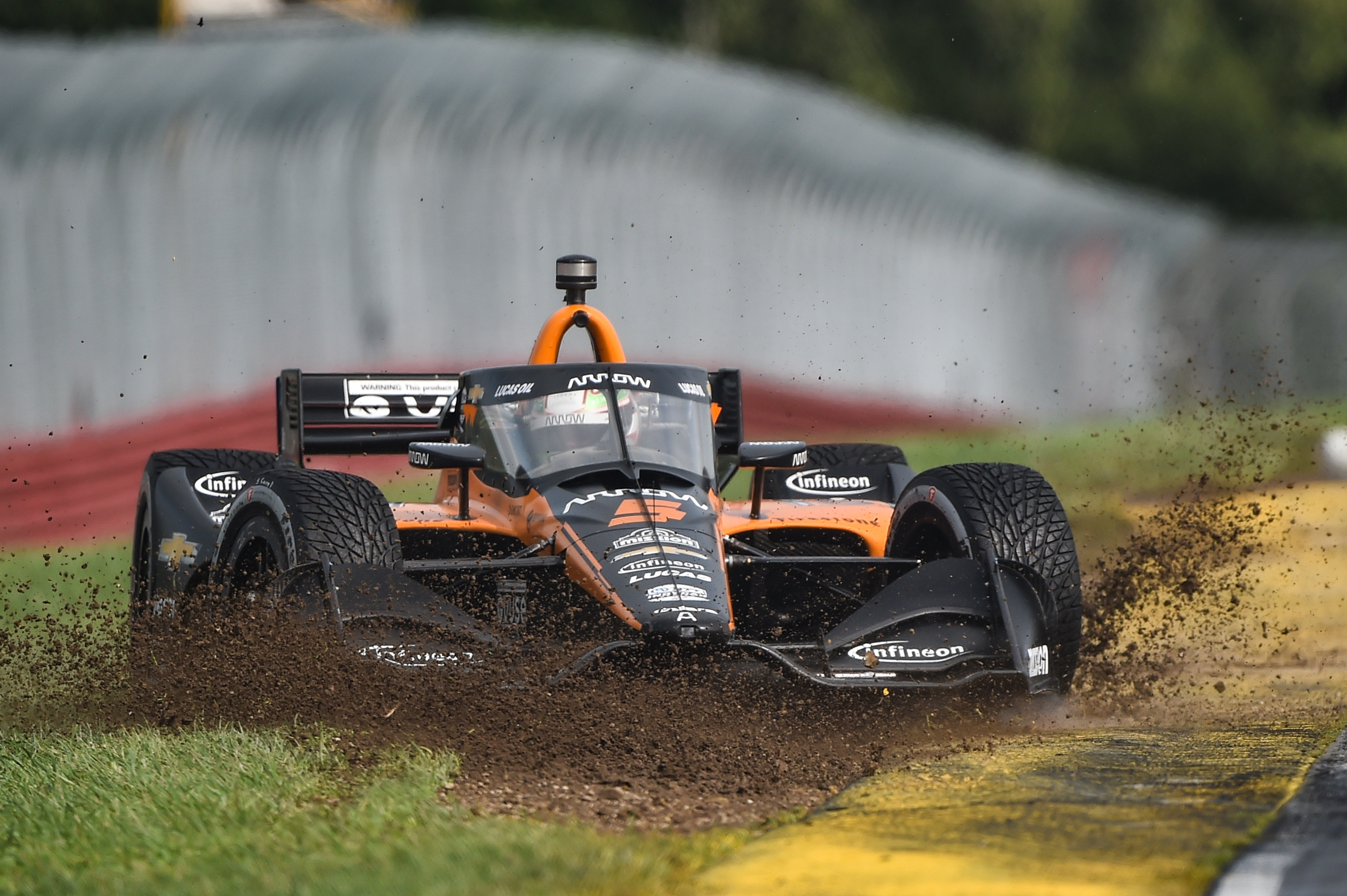 The rulebook states each driver is guaranteed one flying lap, but most got two and with track conditions improving all the time, Ferrucci was bound to be deposed as the poleman.

Andretti Autosport’s Herta set the quickest time on his first and second lap, improving with the second to add another Honda-powered pole to an already impressive IndyCar CV which also boasts two wins.

Due to the group qualifying system, Ferrucci will start second on the grid, with Dixon leaping up the order on his final lap to take third.

However, Newgarden will start ninth for Penske in this afternoon’s race, which starts at 1300 ET (1800hrs BST).

Behind Dixon was Ferrucci’s team-mate Alex Palou, the rookie spinning twice in a matter of corners at the beginning of the first qualifying group. An excellent recovery means he starts ahead of Dixon’s Chip Ganassi team-mate Felix Rosenqvist.

Simon Pagenaud will start sixth for Penske after a woeful race one where he made a mistake and crashed into rookie Rinus VeeKay at the Keyhole at the start, while Marco Andretti managed seventh after risking dry-weather tyres.

Ryan Hunter-Reay was another early spinner but recovered to eighth, ahead of Saturday’s second- and third-place drivers Newgarden and Alexander Rossi.

Jack Harvey was one of the spinners in the second group breaking his rear wing, and the Meyer Shank Racing driver will start from 19th, having tied his best season finish of seventh in yesterday’s race at the team’s home event. 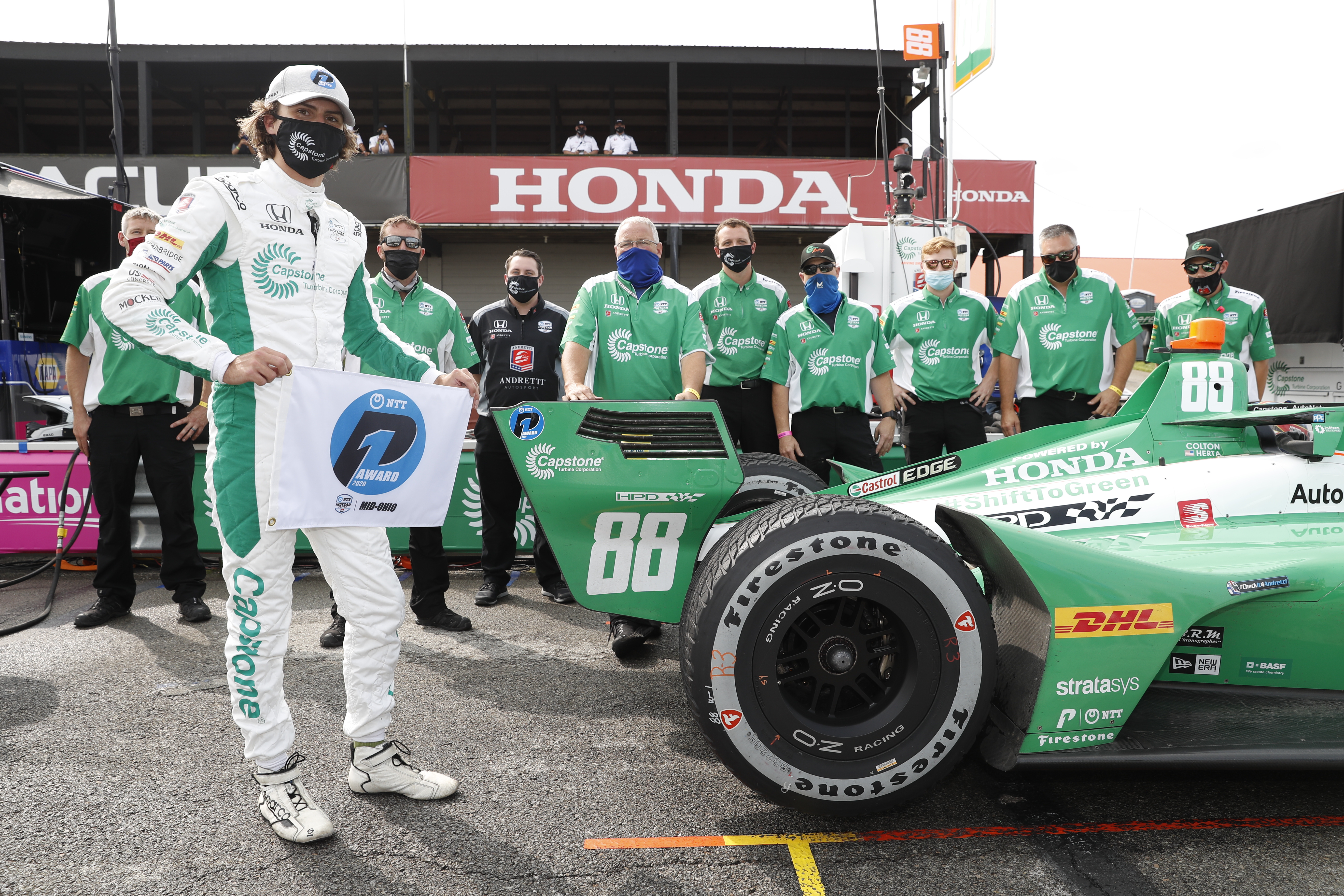