Colton Herta scored his third IndyCar race win with victory in race two of the double-header at Mid-Ohio, as points leader Scott Dixon’s lead was eroded again with an unforced error early in the race.

The last three races at Mid-Ohio in IndyCar have gone without a caution, but two mixed up the order in the second race of the weekend on Sunday. 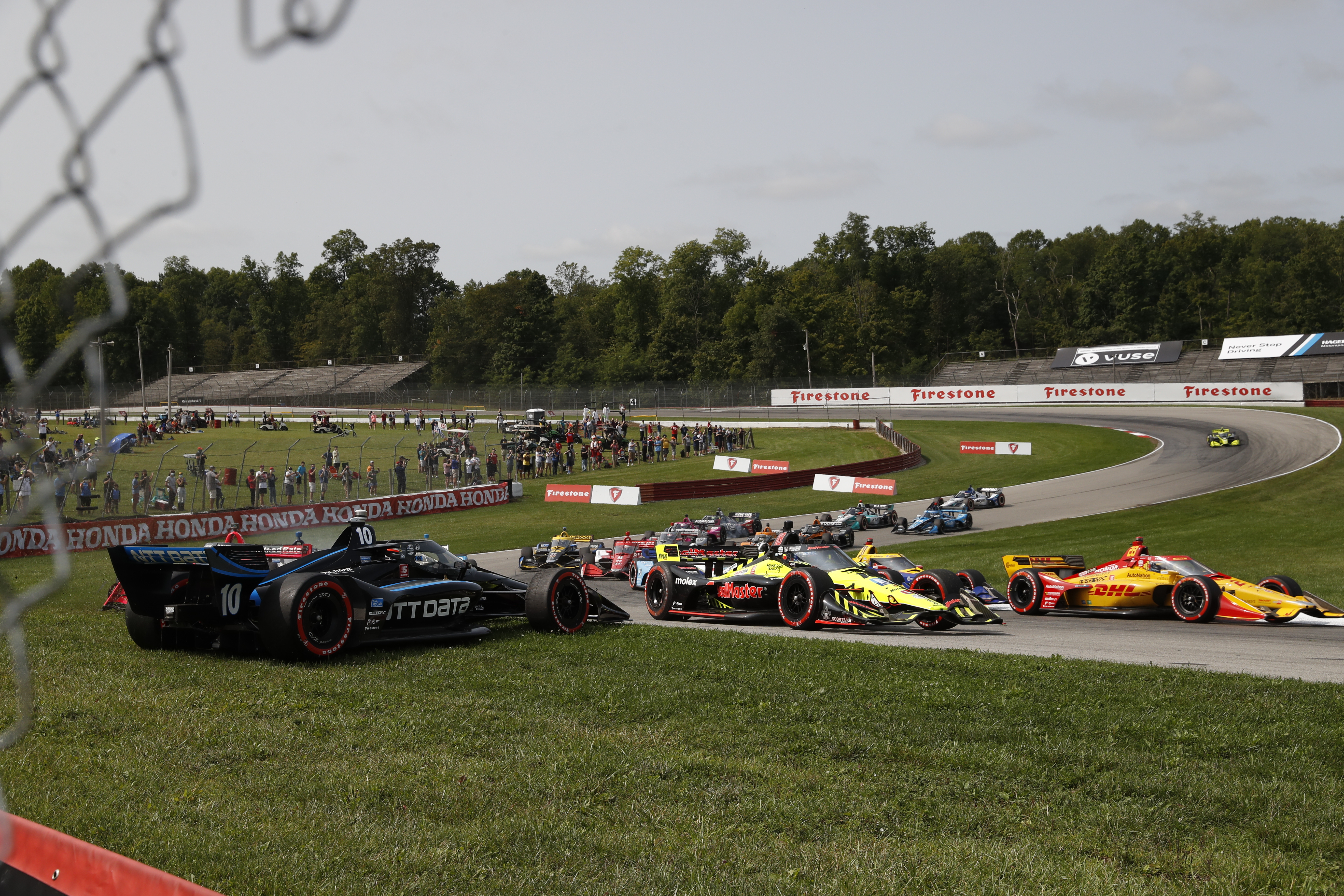 Santino Ferrucci – who had starred by going over three seconds quicker than the others in his qualifying group in the wet – went off at Turn 4 at the start of the race and then came back onto the track at the following Turn 5 left hander.

Out of control, he ploughed into his rookie Dale Coyne Racing team-mate Alex Palou who in turn took out Felix Rosenqvist, meaning three of the top five were out of contention a matter of metres into the race.

Santino Ferrucci slides through the grass — and collects Alex Palou and Felix Rosenqvist.

Under a lap 12 of 75 caution for the beached car of Dalton Kellett, almost the whole field pitted, and that set up a long middle stint but the reduced number of laps from last year’s single race meant it would always be a two-stop contest.

The race came down to differing strategies between the three dominant Andretti Autosport Dallara-Hondas, with long-time leader Herta finishing the race with a long stint on the softer red-walled rubber, while Alexander Rossi and Ryan Hunter-Reay used the harder tyre to finish.

It meant Herta was able to build a two second plus gap over Rossi with the advantage of the grippy rubber, but yesterday’s second place finisher Rossi homed back in when Herta’s tyres began to fall away.

Herta had the measure of Rossi though, living up to his reputation of being strong at tyre management, and held on to win by 1.3 seconds. 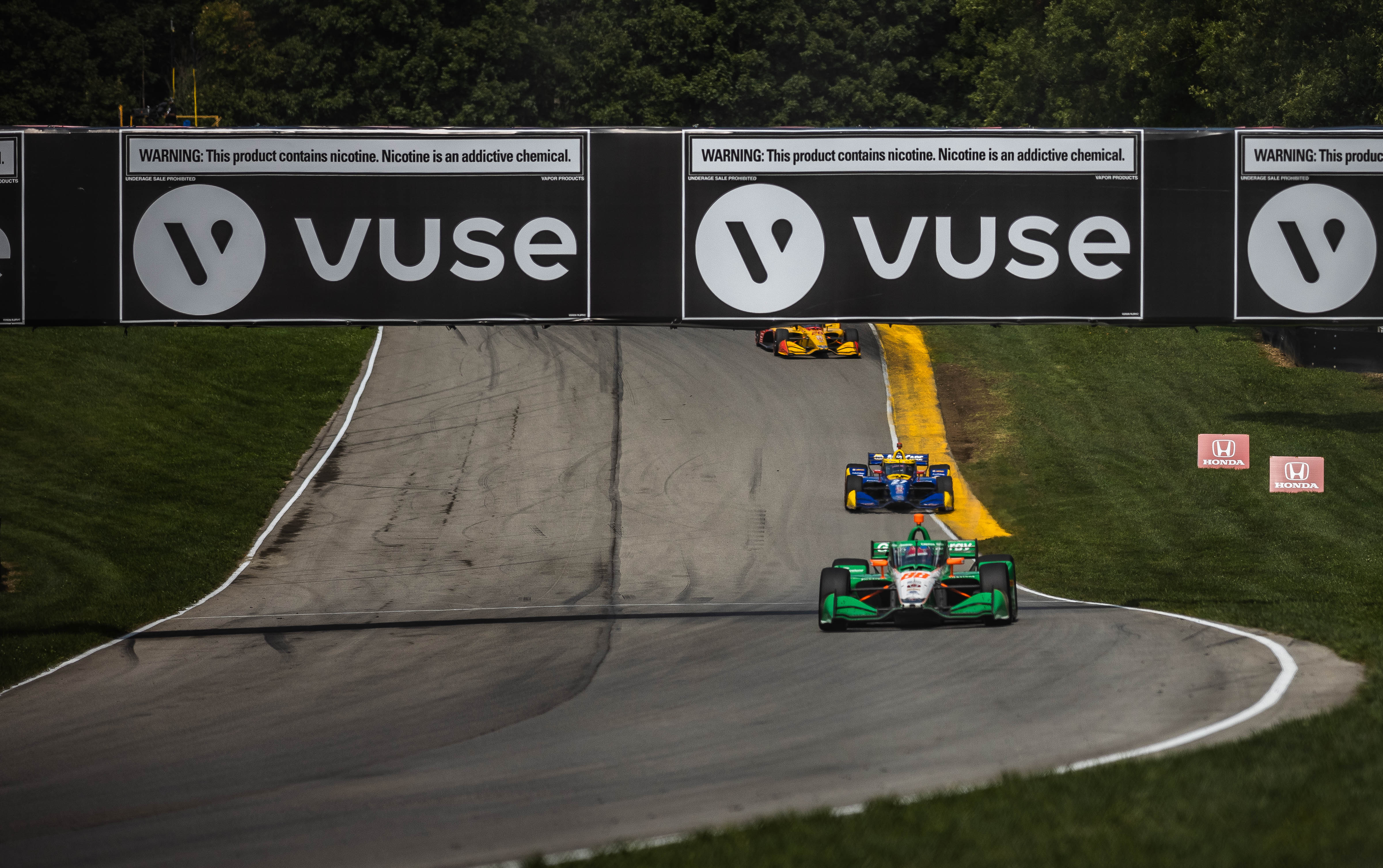 It means Herta keeps up the unusual record of never finishing second or third in an IndyCar race, but now he has three wins approaching the end of his second season.

The key move for Rossi came early on when robust defence from Dixon on Hunter-Reay at Turn 4 allowed Rossi to close in and leapfrog both drivers.

Rossi entered the weekend 18th in the points after a tough year but adds a second to his third in race one to move up the order.

Hunter-Reay rounded out an Andretti Autosport 1-2-3. The whole team only had two podiums entering the Mid-Ohio weekend and leaves with six.

Graham Rahal struggled in the wet qualifying for race two but used his road-course pace on the black tyre to his advantage to leap into the top 10 from his 12th place starting spot, and then continued that move up the order through the pitstops to take fourth, the same result he scored in race one. 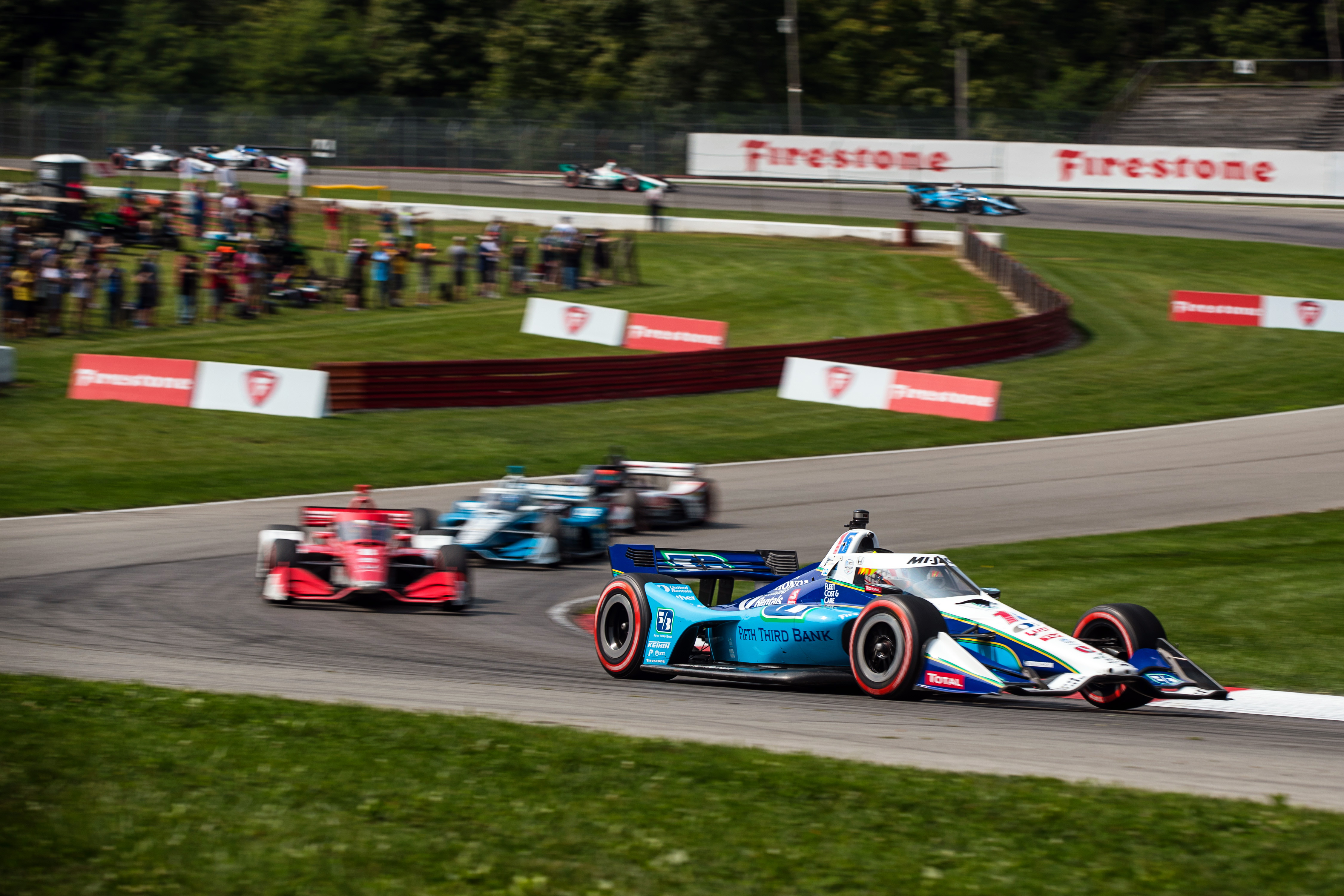 Marcus Ericsson was another early mover like Rahal, jumping to eighth from 15th on the first lap and managing to usurp the Penske drivers during the pitstop phase to take fifth for Chip Ganassi Racing – making it a Honda-powered top five.

Simon Pagenaud made an ill-advised move at the Keyhole and made contact with Rinus VeeKay on lap one in the first race, but rebounded to take sixth in the second race ahead of a train of his Penske Dallara-Chevrolet team-mates Will Power and Josef Newgarden.

Newgarden’s bid to cut into Dixon’s points lead was successful once again as Dixon made a rare unforced error and spun off the track at Turn 1.

The @IndyCar championship leader gets into the dirt and loses control. Coverage continues from @Mid_Ohio on @nbc.

He had been running in the top five and well ahead of Newgarden after qualifying third, but ran wide and touched the grass on lap 22 of 75, sending him to the back of the field.

He fought back to 10th with late moves on Jack Harvey and then Rinus VeeKay to complete his charge, and in championship terms was helped by race one winner Power jumping Newgarden in the pits on the last stops. 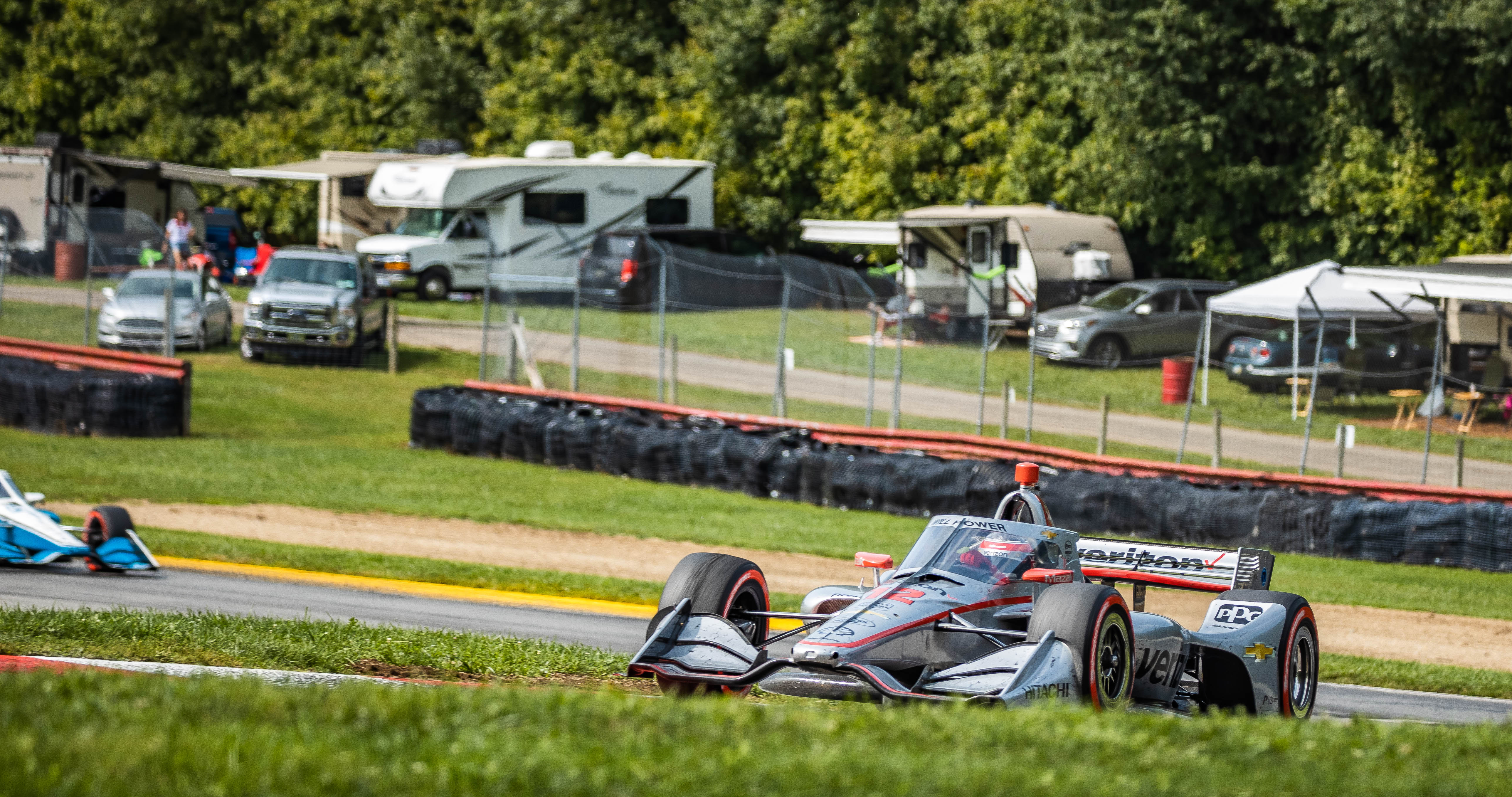 Power was a man possessed after starting 17th following a crash in the wet qualifying session.

Yesterday’s race winner was up to 12th at the start and continued to trend forward, beating Newgarden in a drag race out of the pits to claim seventh ahead of his team-mate.

Arrow McLaren SP driver Patricio O’Ward crashed in practice on Saturday which afflicted his weekend, and qualified 15th which he turned into 11th in the first race.

He crashed again in the wet of qualifying on Sunday, but turned a 21st place start into ninth by the end of the race with good strategy. 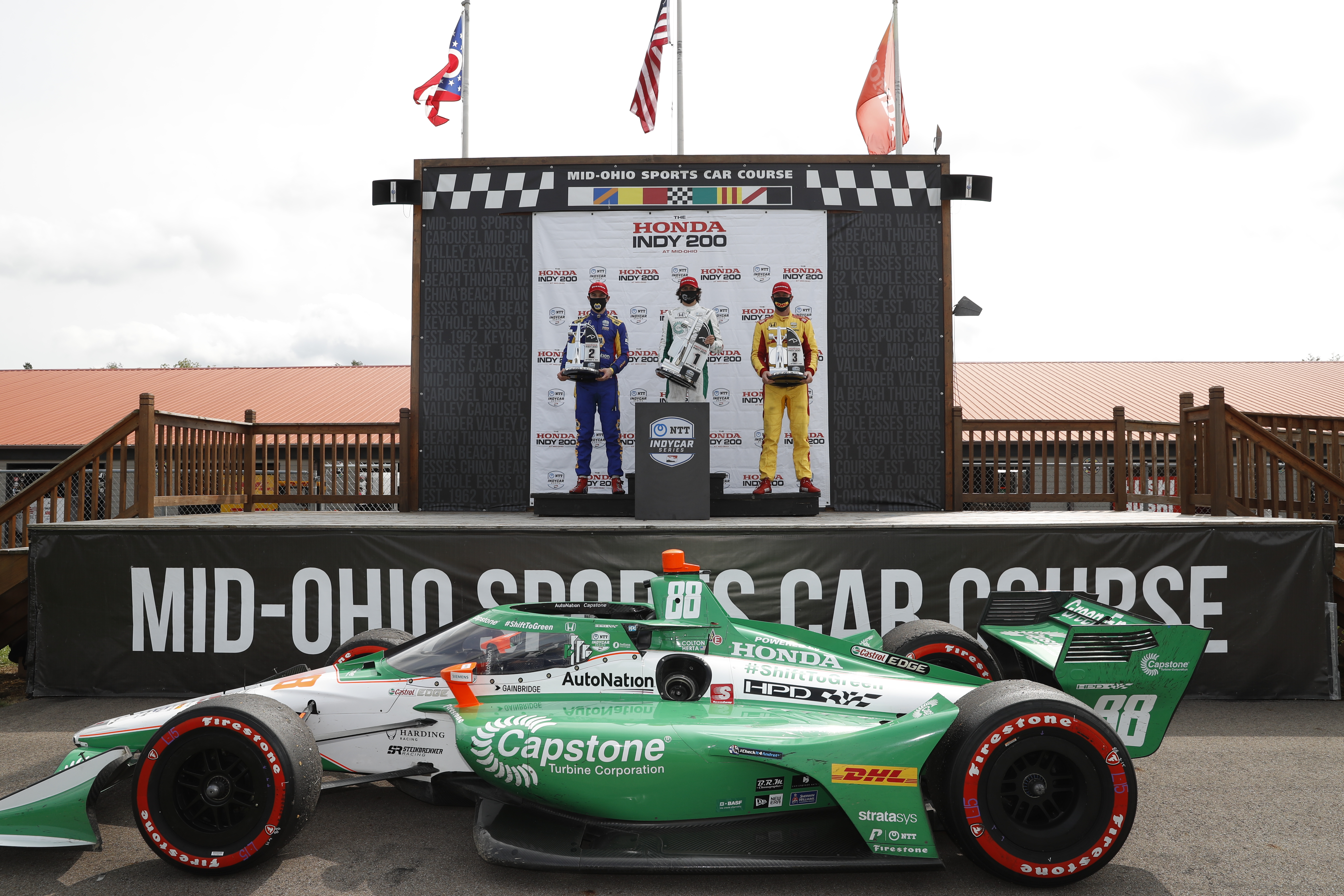