Scott Dixon extended his championship lead with a 50th IndyCar Series win and has won 50% of the races so far in 2020 by holding off a stunning late charge from Indianapolis 500 winner Takuma Sato in the first of a double-header at Gateway.

Indianapolis 500 rookie of the year Pato O’Ward dominated most of the race on his first visit to the venue with Dixon in tow, O’Ward saying after the 500 last week that people needed to start beating Dixon to be in with a shout of winning the championship.

As is often the case on short/medium ovals, the strategy was key, and the race effectively came down to the last round of stops as Dixon shadowed O’Ward the second third of the race and even pitted on the same lap with 38 to go.

Despite Arrow McLaren SP being regularly credited for its pitwork including earlier in the race, Dixon’s Chip Ganassi crew has been just as impressive this year and got its driver out ahead of O’Ward.

The Kiwi immediately pulled out a two-second gap to O’Ward, while Sato came to the fore on the overcut strategy.

Rahal Letterman Lanigan driver Sato didn’t pit until 24 laps to go, and lost over three seconds as his rear-right was slow to be attached. It would have given him the lead.

Last year’s Gateway winner Sato drove furiously on his return to the track, executing a bold and outrageous move on O’Ward shortly after around the outside of Turn 1. It almost caused O’Ward to lose control of his car.

Sato closed almost instantly, but the ever-experienced Dixon held Sato at arms length to narrowly win, his fourth of the season and the perfect tonic after another Indy 500 runners-up finish.

The pitstop issue appeared to cost Sato the victory, while O’Ward was lucky to keep his car out of the wall and held off a charging Colton Herta.

The only Andretti driver in the top 10 in the standings, Herta narrowly avoided an out-of-control Rosenqvist who had a moment during Turn 1 earlier in the race.

Marcus Ericsson ran as high as third and rounded out the top five for Ganassi, the Swede really having taken well to ovals since his arrival from Formula 1. 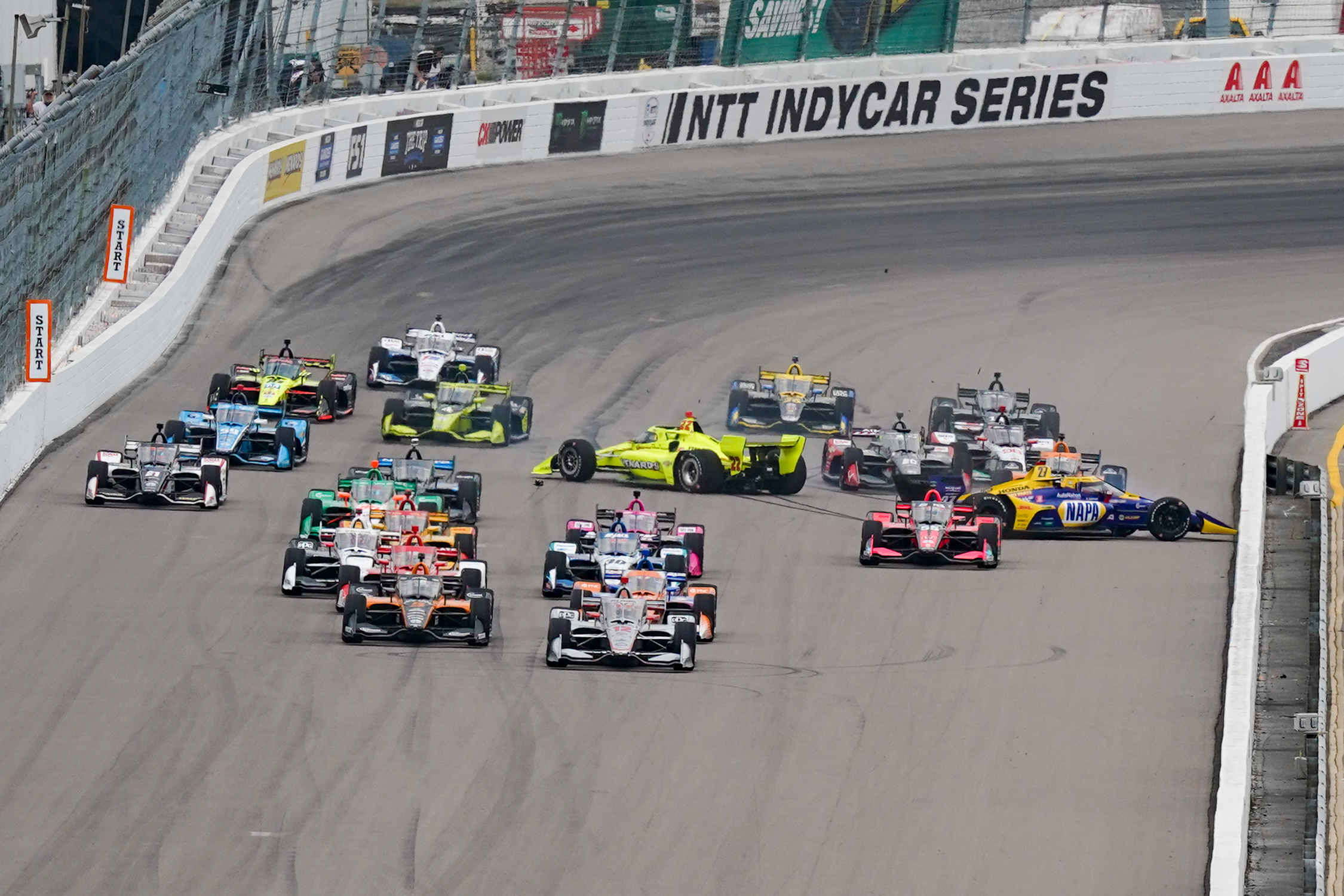 Rookie Rinus VeeKay continued his strong form with a sixth-place finish after getting off sync with strategy and headed Ryan Hunter-Reay who can be happy with the result after missing most of the hour-long practice session on Friday with a brake issue.

Rosenqvist recovered from his moment and went off strategy to recover – leaving all three Ganassi’s in the top eight, while last year’s podium finisher Tony Kanaan and Conor Daly rounded out the top 10.

Will Power, who led just over the first quarter of the race from pole, earned a right-rear puncture which put him off the ideal strategy.

He finished 17th behind Santino Ferrucci, who had been in the top five but a pitstop error plummeted him down the order. It was significant as a mistake in the last pitstop of last year’s race cost Ferrucci what appeared to be a certain victory.

Six cars – including last year’s Indy 500 winner Simon Pagenaud – were caught in a crash before the race even started.

Palou and Askew were sent to the back of the field for causing avoidable contact.

The second race of the weekend at Gateway kicks off at 8.45 pm BST on Sunday. Sato starts from pole, with O’Ward in fourth and Dixon sixth. 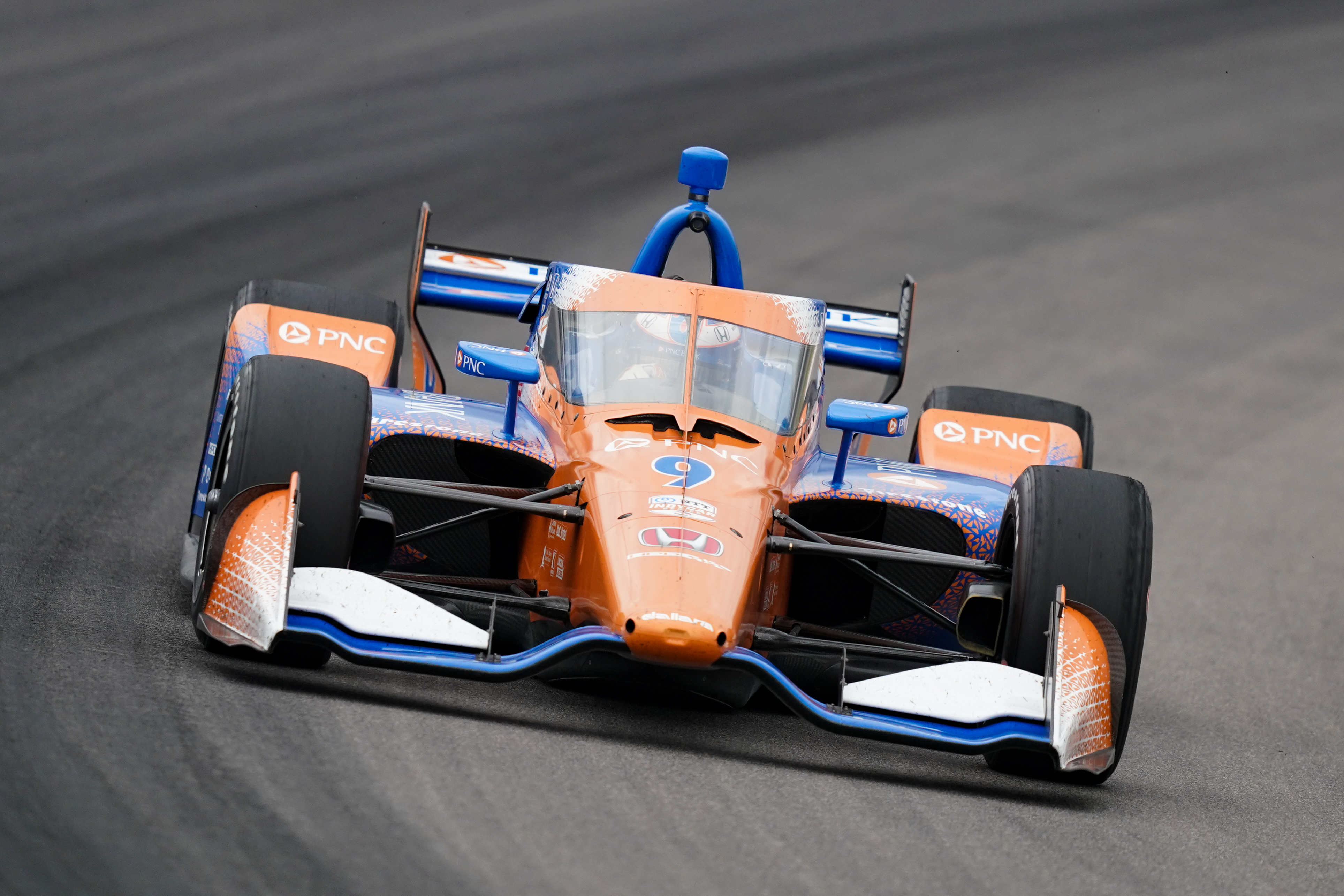