Josef Newgarden became the first two-time Gateway winner in eight IndyCar races at the venue by claiming victory in the second race of the 2020 weekend, as Pato O’Ward narrowly missed out on a first win for the third time this year.

It was clear that strategy and pit stop speed was far more important that on-track speed from the first race with overtaking being so tough, and what ensued was a battle of drivers either taking an undercut or going long to eventually take less fuel on a later stop.

Team Penske’s Newgarden started second and ran in the top five most of the day. A longer penultimate stint allowed him to take a shorter service on the last round of pitstops giving him a slight time advantage.

That produced the key moment of the race as net leader Will Power would pit a lap later, and O’Ward followed Newgarden into the pits.

A drag race off pit road ensued – where O’Ward has excelled all weekend – but despite the latter’s sideways antics, Newgarden had the inside line and came out with 48 laps to run into what would be the lead.

Power was caught in traffic entering pit road which cost him dearly as he slipped to third and a long way adrift of the leaders.

O’Ward remained within a second for most of the concluding laps creating a tense finale, but like one day previous, he missed out at the last.

This time it was due to a caution with four laps to go as Saturday runner-up and Indianapolis 500 winner Takuma Sato hit the wall at Turn 2.

That meant the race finished under caution, with Newgarden eating into Scott Dixon’s 100+ point lead. O’Ward added to yesterday’s third place for a strong weekend, establishing a nice gap in third in the points.

Power filled the airwaves with expletives when he came out of his last stop in third, but was unable to make inroads towards the top two and had to settle for the position he started in.

Rookie Rinus VeeKay’s race was made in the first stint. The Ed Carpenter Racing driver made a brilliant overtake of four cars on the first lap from 18th, pitted early and jumped into the top five where he remained for most of the race.

Colton Herta looked to be the man to watch at the end as he went much longer than anyone in the penultimate stint, but decided to take his last stop not long after his rivals and came out behind Power.

While chasing Power, Herta got high into Turn 1 and almost crashed. VeeKay got a run on him and cut across him as the two made contact in Turn 3, and Herta narrowly avoided the Turn 4 wall where a dusty substance used to soak up the oil dropped from a car in the pre-race ceremonies made his job even more difficult.

Ultimately a winning position turned into sixth for Herta, as VeeKay – completing a Chevrolet top four – and Dixon passed him during that Herta Turn 4 save.

Dixon – who took his 50th win the day before in the first race of the weekend – tried to pit early on his last stop for an undercut to put him in contention, but it wasn’t enough.

Felix Rosenqvist scored his best result on an oval in Saturday’s race and bettered that by one position to take seventh for Chip Ganassi Racing a day later in a consistent run where he was rarely out of the top 10.

The second-year driver headed Conor Daly who gave Carlin another oval top 10, ahead of Sato who crabbed his way over the line after that late crash.

Santino Ferrucci rounded out the top 10 for Dale Coyne, after his last pitstop was slow for the third time in as many races at the track. The first, in the 2019 race, had cost him a near-certain victory.

While he is expected to return to the series, 2013 Indy 500 winner and 2004 IndyCar champion Tony Kanaan contested his last event of the season and possibly of his series career.

The IndyCar Series isn’t officially set to return until a double-header at Indianapolis on the first weekend in October, but IndyCar president Jay Frye confirmed before the race he was 89% confident the rescheduled Mid-Ohio double will take place in two weeks time. 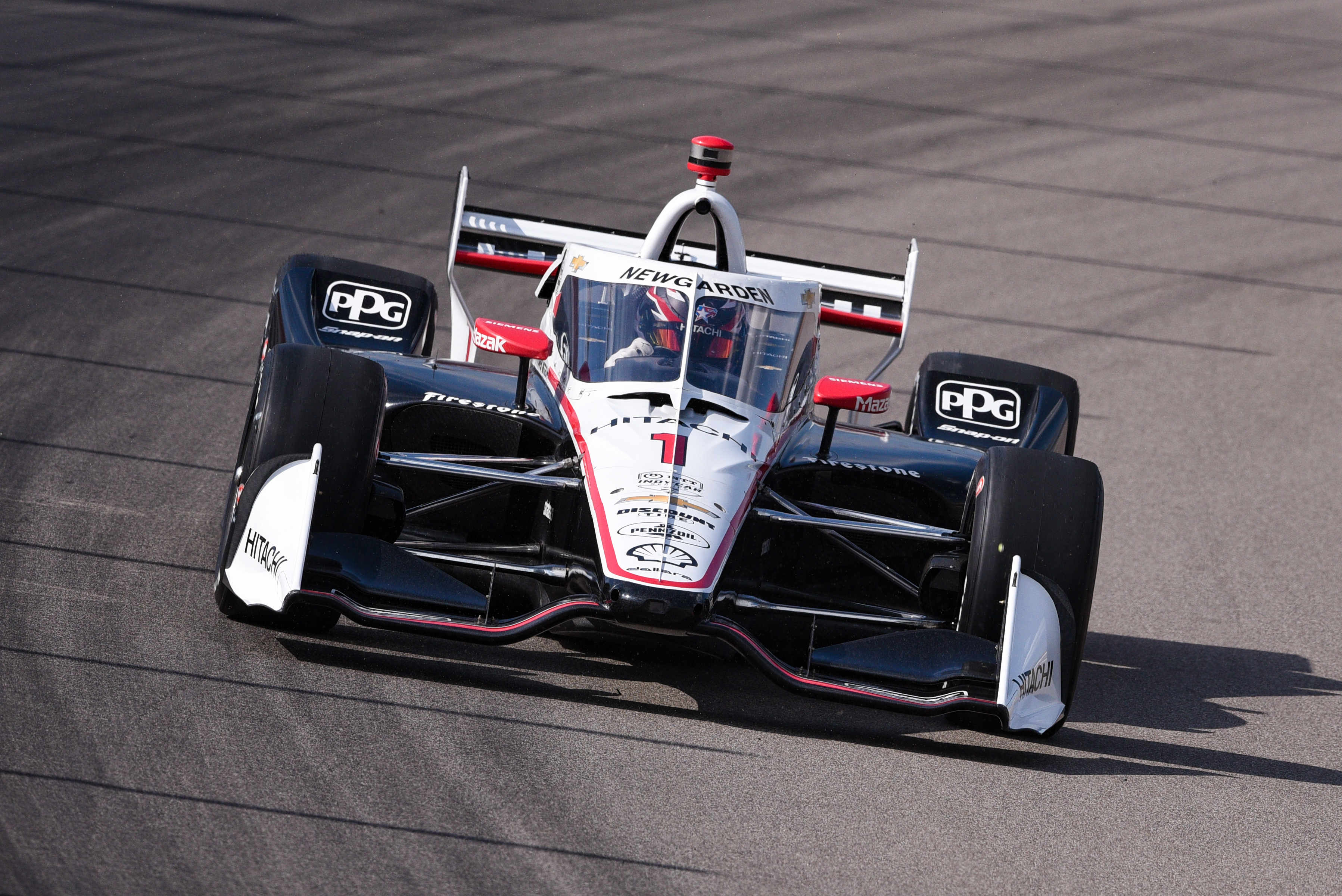