Jean-Eric Vergne was left furious with his DS Techeetah team after a pre-race plan to collaborate with his team-mate Antonio Felix da Costa failed to come off in Formula E’s Berlin opener – which da Costa won.

According to team principal Mark Preston, the pair, who comfortably locked-out the front row of the starting grid, were due to run close together in the early stages of the race.

However, da Costa immediately opened up a two second cushion over Vergne – who became increasingly animated over the team radio. 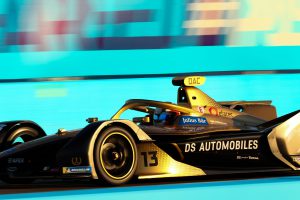 On several occasions Vergne asked his engineer Pascal Tortosa why Da Costa was over-consuming energy in comparison to his own energy targets.

Vergne had initially complained of a brake balance issue on the opening lap after he ran briefly wide and lost some time to da Costa, who converted his pole position easily.

As the race wore on Vergne issued several animated messages to his engineer including: “He [da Costa] is clearly over-consuming and not following beeps [prompts for energy saving]. I will remember this!”

Just before the DS Techeetah pair took the first attack zone power boost together, Tortara informed Vergne that the team’s race director Leo Thomas “says you are free to race”.

Vergne simply replied: “I will remember that,” when informed of the apparent change of plan.

When Vergne lost any chance of getting back on terms after his second attack zone boost was taken just before a full course yellow was deployed to recover Felipe Massa’s crashed Venturi-Mercedes, his exasperation went up another notch.

“I have no energy, I cannot fight,” continued Vergne.

“We did have a plan to stay together but that didn’t pan out” :: Mark Preston

Preston confirmed that the plan going into the race was for the pair to run together in a similar manner to what they tried to achieve in Santiago and Mexico City.

On those occasions the plans were contentious – with da Costa feeling as though he was compromised in Chile and Vergne making the same complaint in Mexico.

However, in Marrakesh da Costa spent some of the race deliberately running behind BMW’s Maximilian Guenther – which DS Techeetah said benefited da Costa’s consumption levels and strategy across the duration of the race. He went on to win.

“We had a plan which we discussed yesterday when we didn’t know where we’d be on the grid and then of course, we’re 1-2,” said Preston.

“Obviously it just became more serious, because then we knew kind of what we had to do so we formed a plan.

“We tried to make it play out, but it didn’t quite come out as we’d hoped for – two drivers on the podium.

“Marrakech showed there is something to gain from running behind somebody. And we did have a plan to stay together but that didn’t pan out.”

He suffered contact first with Mitch Evans and then with Lucas di Grassi, the latter causing him to spin out and he pitted on the final lap with damage so was not classified.

The result leaves Vergne now 66 points behind his team-mate, who enjoys a 41 point advantage over second placed Mitch Evans.