Nissan has been forced to abandon plans to run its new powertrain at the Rome double header races next month after a supply chain issue caused by on-going disruption due to the COVID-19 pandemic.

The new technical package, which will be dubbed the Nissan IM03, is now unlikely to debut until the Monaco event on May 8 meaning that the Nissan e.dams will run a pair of the IM02 cars in the next four races in Rome and Valencia.

The decision not to run the new hardware comes after a two day private test at the Calafat track in Spain last week. Sebastien Buemi and Oliver Rowland shared the driving at during the session sharing a track with DS Techeetah who will unveil its new powertrain at the Rome EPrix.

The Race understands that the team was initially aiming for a three day test but this was downscaled to two at short notice.

Nissan has told The Race that curtailing the Calafat test was ‘due to parts and a precautionary move due to ‘a preference to save one day to validate some extra items’.

It shared the test with fellow French based team DS Techeetah which will debut its new car in Rome. The Race understands that fellow ‘slot two’ homologation team, Dragon Penske Autosport, will also debut its new tech next week leaving Nissan the only manufacturer still using 2019-20 spec kit.

A Nissan e.dams spokesperson told The Race today that via an “agreement of the FIA, we have rescheduled the debut of the new Nissan e.dams Gen2 Formula E powertrain due to a covid related delay of parts. We would like to thank the FIA for their flexibility”. 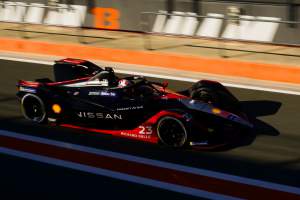 Nissan e.dams chose to homologate its new car in the second official slot, which ensured it could be used from the first European round of the campaign.

Nissan is known to have looked at homologating in a third available slot which was originally set for the first race taking place in June 2021, although this became less attractive because of the uncertainty over the current calendar.

It is not the first time that the Japanese manufacturer has been put on the backfoot. Its first car, the 2018-19 spec Nissan IM01, had its development curtailed in the summer of 2019. This was due to the FIA imposing a restriction on powertrain designs to just one MGU. 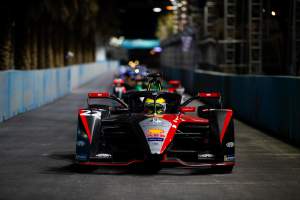 The decision was made after rival teams questioned the application of power from the design which was rumoured to use a form of epicyclic gearset design. This could have ensured that acceleration could be achieved with both motors at the same time.

The issues surrounding the design are believed to have come from the larger MGU being used as a potential conduit of energy to the spec battery. The scope for using more than one motor was outlawed from the 2019-20 onwards.

This meant Nissan had to adapt its hardware but it continued to be competitive last season scoring a victory with Oliver Rowland and finished second in the teams’ standings.

It started off the current season with mixed results with Oliver Rowland collating 14 points with two excellent performances in Saudi Arabia while Sebastien Buemi suffered two difficult races to score zero points for the second season in succession.

Mar 01 : Formula E back with a bang! Sparks fly under the lights in Diriyah
Thank you for your feedback!