Hankook has started doing initial exploratory testing of its first Formula E rubber that will debut at the end of next year on the Gen3 car.

The Race can reveal that tests have been carried out in Europe in recent weeks using an old GP2 car to evaluate the first iteration of all-weather tyre.

Hankook’s debut in Formula E for the 2022/23 season will be the first time in a decade that anything other than a Michelin tyre has been used on a Formula E car.

The Korean company won the tender to supply Formula E last July, beating Michelin, which was initially expected to confirm a third deal as the official tyre supplier.

Hankook is working on a major programme to further evidence its sustainable credentials. Last year it was awarded a Platinum status by EcoVadis for its CSR commitment, and it is one of only three tyre manufacturers listed in the Dow Jones Sustainability Index World.

The test was organised with Spark Racing Technologies (SRT) with a ‘neutral’ driver that had no manufacturer affiliations used. 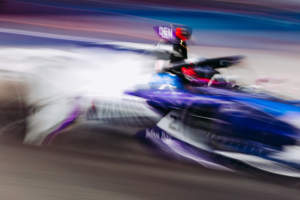 Hankook submitted an all-weather design to the FIA 16-months ago to the official FIA tender which specified rubber for the “lowest rolling resistance, less tyre wear and optimum handling of the car in all weather conditions”.

The tyres have to endure the maximum power levels outlined by the FIA for Gen3 and include wear which allows for just “two new rear and two new front all-weather tyres of the same specification per race”.

Tyre modifications “such as cutting, grooving, scrubbing-in, the application of solvents or softeners, as well as the fitting of heat retaining devices or preheating” are prohibited.

Drivers have already raised concerns on the scant number of tyres for Gen3, with double champion Jean-Eric Vergne telling The Race that he is “not looking forward” to the new for 2022/23 allocation plans as they stand.

“I don’t know why we have this rule to be honest,” said Vergne.

“Talking about this one, it’s quite difficult because sometimes you can get unlucky have a puncture in the shakedown, for example, nothing to do with you, so it’s a bit of a lottery.”

Diriyah E-Prix victor Sam Bird said: “We need to see what that’s like but certainly if you do have any contact with the wall or you have a puncture, your day can be very easily compromised.”