Jaguar has registered with the FIA as a manufacturer for Formula E’s new Gen 3 rules era, which will begin at the end of 2022.

The decision means all bar Mercedes, BMW and Audi of the present grid of FE manufacturers has signed up for the new rules, which will mean faster and lighter cars competing in races that will use fast charging infrastructure.

The Race revealed last week that Mercedes is yet to sign up as a manufacturer and has thus missed last week’s technical working group meeting where initial CAD data of the new rules was made available from key suppliers Williams Advanced Engineering, Spark Racing Technologies and new tyre provider Hankook. 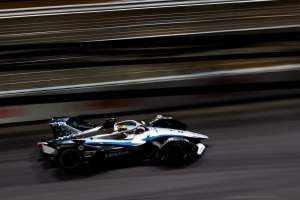 Jaguar’s signature for the new rules was confirmed to The Race by team principal James Barclay, who described the milestone as “good to be focused on moving forward.”

“At this point in time, we’re not ready to announce the wider plan, and that’s partly because we’ve only in recent terms, in February, actually announced our ‘Reimagine’ strategy,” Barclay told The Race.

“So while we’re doing that, we also need to finalise the wider details, what that strategy actually means, and importantly our future motorsport plans and how they will play a role in that.

“That will come at a later point, so we can’t say too much for now.

“But it’s good to be focused on moving forward with our development of the Gen3 car, and obviously time is of the essence to be on track with that.

“Getting CAD data, being able to to start to work out your packaging on the new car, how it’s going to be different to this current car, how different is the packaging requirements and does that require a rethink in some areas, all that is actually really kind of critical.

“As always time is of the essence and trying to catch back on that can be very difficult.”

Jaguar Land Rover (JLR) unveiled the programme, which is to be known as the ‘Reimagine strategy’ in February when it emphasised a “true sustainability” message for all future Jaguar models.

Jaguar joined Formula E in December 2015 after purchasing the licence vacated by the Trulli team, which ceased competing after the first two rounds of the 2015/16 campaign.

It made its debut at the inaugural Hong Kong E-Prix in 2016 and went on to secure its first points at the 2017 Mexico City E-Prix.

It then claimed a first pole at the 2018 Zurich race before scoring the first of its three wins with Mitch Evans at the 2019 Rome E-Prix.

Penske Autosport and NIO333 are believed to have also attended last week’s TWG meeting, meaning that of the current teams that might participate in the Gen3 era only Mercedes was not given an invitation.

Audi and BMW have already announced they will be pulling out of Formula E before Gen3 begins.