Future Gen3 Formula E battery supplier Williams Advanced Engineering is confident it can ensure absolute parity and confidentiality in its role, despite its links with the Jaguar team.

WAE sealed the tender for the three-season next generation Formula E battery supply two months ago.

It has been a key technical partner with the Jaguar Racing team since 2016 and both companies share the same premises at Grove in Oxfordshire.

Craig Wilson acts in a dual role as race director of Jaguar Racing as well as managing director of WAE.

The firm was in the same position for two seasons when it supplied Formula E’s Gen1 spec battery while beginning the partnership with Jaguar (pictured above on its FE debut in 2016), before McLaren Applied Technologies picked up the battery tender for the Gen2 cars.

The Race understands that some concern was expressed by other manufacturers about how WAE’s two roles can co-exist successfully for Gen3.

The landscape of Formula E is vastly different to how it looked in 2016 with a host of new high-profile OEMs having entered the series – which gets official world championship status next season.

Since 2018, Audi, BMW, Porsche, Nissan and Mercedes have added a significant amount of prestige and powerplay to many of the groups formulated by Formula E, such as the Technical Working Group and the Commercial Working Groups that sit regularly.

Some anxieties and questions about absolute clarity on the way both of WAE’s programmes work in relation to the other were expressed off-record to The Race during the build-up to the battery deal being announced.

But other teams have come out to back how WAE will handle the deal, which it won through an official FIA tender that includes lengthy due diligence protocols.

“It was much discussed through the tender due diligence, and we obviously have the history and the precedents of doing it in seasons three [2016/17] and four [2017/18],” Wilson told The Race.

“I genuinely believe that everybody was very comfortable, including all the manufacturers, about how that was conducted.

“We had a role obviously, to maintain the battery system, per se, but no access to anything else, and it worked very well.

“We make it [the battery] so that it’s just not possible for anybody involved in the Jaguar programme to know anything about any other team’s situation, so that will be our approach and as I said that’s been discussed at length with the FIA.”

Jaguar Racing, which in early 2021 is likely to confirm an extension to its initial commitment of five seasons to Formula E, promised ‘full impartiality’ on the part of its partner for Gen3 supply.

“We have full faith in the very detailed and thorough process that both the FIA and Williams Advanced Engineering will have been through to demonstrate and guarantee how their supply of the Gen3 batteries will be independent and have full impartiality to ensure sporting equity for all teams. We wouldn’t want it any other way,” a Jaguar team spokesperson told The Race.

Other manufacturers that have backed the FIA’s decision on selecting WAE include Nissan and Mercedes.

The Nissan e.dams team has recent history in the championship with a similar scenario after it worked with McLaren Applied Technologies (MAT) for some key powertrain components.

MAT, along with the Atieva company, is supplying the rechargeable energy storage system (RESS) for all teams during the Gen2 period of racing between 2018 and 2022. 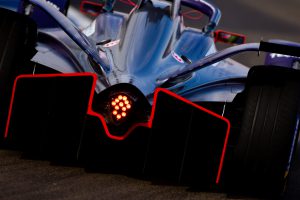 “We are not particularly concerned about this as each team will have to work out how to use the batteries in its own powertrain anyway, so our work will be specific to our Nissan e.dams car,” Nissan’s global motorsports director Tommaso Volpe told The Race when asked about the WAE/Jaguar links.

“This is the same for any other standard FIA homologated part in FE (and in any other motorsport category), the FIA makes sure that these components are exactly the same for all the teams.

“It is not the first time that one supplier of a standard component has a partnership or is even part of the same company of one specific team.

“Sometimes the supply is even done directly by one team for all the others in the same championship.”

Mercedes team principal Ian James mostly echoed Volpe’s sentiments, telling The Race that “at the end of the day that the number of companies which can provide that technology [is limited], and the FIA clearly believes that Williams Advanced Engineering, for whatever reason, offered the best package.

“As long as the right controls are in place then that is something we are comfortable with,” concluded James.

WAE runs several programmes for automotive manufacturers and as a consequence is adept at keeping clear boundary lines with in-house projects.

With several of those companies being direct competitors, WAE had to put in place strong confidentiality systems to ensure data is kept apart.

The Jaguar Racing team is very clearly separated from the rest of the WAE business both physically and electronically. The two businesses are believed to have separate data systems that ensure it is not possible for one to access the other’s information.