‘You feel a bit stupid’ – Alonso’s fury at unpenalised rivals

Fernando Alonso was infuriated by drivers using the run off at Turn 1 of the Austrian Grand Prix to gain an advantage, complaining about it over the radio during the early-race safety car period and after the race.

Alonso started 14th and was 16th when the safety car was deployed on lap one. But after diving up the inside of Leclerc, who had McLaren’s Daniel Ricciardo on his outside, at Turn 1 he felt that the McLaren driver gained places by abusing the runoff area.

“So Ricciardo out of [Turn] 1 gained three or four positions, so I guess a penalty will come very soon,” said Alonso.

“It was amazing, what he did, amazing. So I guess he needs to give up at least six positions. And it has to be now, not at a pitstop.”

After being told Ocon was out of the race, Alonso returned to the topic saying that “the Ricciardo thing is the most important, we must race fair in Formula 1”.

He subsequently suggested that if the FIA is “happy with track limits” it will be OK to take advantage elsewhere. 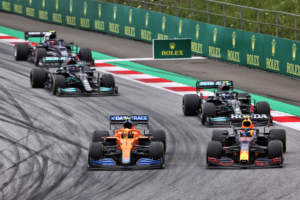 He then extended that to suggest other rule infringements might be allowed, saying “But I can overtake before the finish line, I mean there are rules or no rules in this race” – with a clear tone of sarcasm.

Such track limits infringements are not usually penalised at the start of grands prix, but as Alonso later explained he felt that drivers were deliberately using that leniency to gain an advantage.

He also felt he was disadvantaged in the previous weekend’s Styrian Grand Prix when Pierre Gasly and Leclerc went wide in Turn 1 while he battled with them.

“We raced here two times in two weekends and I was the only one overtaking cars at the start, braking very late often one on the inside,” said Alonso.

“I overtook Ricciardo and Leclerc this time and they went off track at the exit of [Turn] 1 and they exited in front of me.

“And even more than that, they take the run into the next car in front from the slipstream into Turn 3. I felt that was very unfair today and it was last weekend. 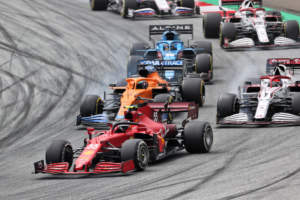 “I was into Turn 1 in front of Charles and Ricciardo, and I exit then 150 metres behind Ricciardo and I was the only one making the corner, so you feel a little bit stupid.”

While Alonso was mistaken to suggest Leclerc gained such an advantage in the Austrian Grand Prix, because the Ferrari driver was always within the track limits, but Ricciardo certainly did benefit.

He also has a point about the previous week’s race, where he also opted to attack on the inside of the first corner and Leclerc and Gasly used the runoff.

Alonso’s insistent tone on the radio and after the race suggests this will be a matter he’s likely to take up at the next drivers’ meeting.

Alonso was not the only one infuriated by this. Williams driver Nicholas Latifi also complained about Schumacher running wide at Turn 1 on the opening lap.

“Schumacher was way off the track in Turn 1 and gained a massive advantage,” said Latifi.

“He just sent it right up around the outside and off the track. You can’t do that.”