The Tuscan Grand Prix as it happened

Lewis Hamilton ultimately dominated Formula 1’s first race at Mugello, which will be remembered for its chaotic and destructive opening laps and being red-flagged twice.

Here’s how it unfolded:

On the grid: Frantic work at Red Bull as Verstappen reports an engine problem on the way to the grid. The team believes it’s managed to fix it ahead of the start.

Start: Bottas immediately blasts past Hamilton into the lead as Verstappen tumbles down the order.

Lap 1: Sainz spins in a brush with Stroll and is clipped by Vettel, breaking the Ferrari’s front wing.

Scott Mitchell: “‘No power!’ Max screamed as soon as he started. He dropped well into the pack. Then he got rear-ended into the first chicane. ‘This is what you get with this fucking shitshow! Honestly!’ he says.

“And this is proper hero-to-zero stuff for Gasly. A first F1 win one weekend. Eliminated in Q1 and out of the race in a first-lap crash the next.”

Scott Mitchell: “Verstappen’s elimination presents a huge, huge opportunity for Alex Albon to score his first podium in Formula 1. He should be able to pass and ease away from Leclerc once racing resumes.”

Lap 7: The safety car comes in but is immediately called back out after a massive tangle in the midfield. Sainz, Magnussen, Latifi and Giovinazzi are all out. The race then gets red flagged.

Scott Mitchell: “That was such a frightening accident. Anything involving cars accelerating and braking like that is a recipe for trouble. You just need one car to commit, and get it wrong, and this is what happens. So dangerous.

“The issue seemed to be in the pack some drivers committed too early, either trying to pre-empt the start or just not paying attention. There’s no racing allowed before the start/finish line at a safety car restart so Bottas was entitled to hold that pace.”

During the red flag: Renault retires Ocon’s car with a brake problem. He’d been warned about high temperatures from the start.

During the red flag: Both Mercedes switch to medium tyres from softs ahead of the restart.

Restart: Bottas again makes the better start, but Hamilton goes around the outside of him at the first corner to take the lead.

Scott Mitchell: “Well that’s a nightmare second start from Albon and I’d imagine his chance of a podium is now pretty much gone. This was looking like a weekend he finally hooked up but he’s made life so hard for himself now.

“There’s been no mention of a problem for Albon over the radio, pure silence, so I think that was just a genuinely bad start rather than a Verstappen-like loss of power.”

Lap 13: Hamilton sets the fastest lap and gets his lead over Bottas up to nearly two seconds.

Leclerc is already six seconds behind in third place, ahead of the Racing Points, Ricciardo and Albon.

Edd Straw: “Stroll has a good shot at taking third here. He’s chasing Leclerc and should be able to make a pass using the DRS. A second consecutive podium finish is on the cards.”

Lap 13: Russell had lost 10th to Raikkonen at the restart, but he repasses the Alfa into the first corner.

Lap 15: Ricciardo takes fifth place from Perez with a DRS pass on the pits straight.

Lap 16: Stroll makes a big attempt to take third from Leclerc but is rebuffed.

Edd Straw: “Stroll is being warned that Ricciardo is about to get the DRS on him. That will give him the hurry up to try to clear Leclerc.”

Lap 16: Vettel overtakes Raikkonen for 11th place down the outside into the first corner.

Lap 17: Bottas has fought back and is matching Hamilton’s pass, sitting 1.6s behind him.

Lap 18: Stroll goes around the outside of Leclerc into the first corner and secures third.

Lap 18: Albon makes it past Perez to take sixth place in the same fashion.

Scott Mitchell: “Good move from Albon to claim sixth. He had to wait for Perez to drop out of Ricciardo’s tow to get enough of a run down the straight but once he had the chance he braked late and used the outside line to good effect. ”

Lap 19: Ricciardo sweeps past Leclerc before the first corner and demotes the Ferrari to fifth.

Edd Straw: “So with Ricciardo now up to fourth place there’s a chance Renault might finally have a shot at that long-awaited podium here. He’s 1.4s behind Stroll and looking quick.”

Lap 20: Another place lost for Leclerc as Albon takes fifth from him.

Scott Mitchell: “Albon has the bit between his teeth and after passing Perez, he was straight onto Leclerc and blasted past on the straight. This should be a proper fight between Stroll, Ricciardo and Albon for third place now.”

Lap 21: Perez takes sixth from Leclerc into the first corner, despite Leclerc trying his best to hang on around the outside.

Lap 22: Leclerc pits and falls to the back of the field in 13th. He swaps to hard tyres.

Lap 26: Hamilton is maintaining a 1.7s lead over Bottas, with third-placed Stroll 15s off the lead and still shadowed by Ricciardo and Albon. Perez has fallen away and is under pressure from Norris.

Lap 26: On his newer tyres, Leclerc passes Grosjean for 12th.

Lap 28: Both Ricciardo and Raikkonen make pitstops. Ricciardo goes from softs to mediums and rejoins eighth between Kvyat and Russell. It’s an extremely slow stop for Raikkonen.

Lap 29: Bottas is now 2.5s behind Hamilton and asking to be put on different tyres to his team-mate when they pit.

Lap 29: Perez, Vettel and Grosjean are next to pit. Perez comes out still behind Leclerc in a temporary 10th.

Lap 30: Norris, Kvyat and Russell pit. Norris falls back behind Perez, who he had recently overtaken on track. Russell stays ahead of Vettel.

Lap 30: Bottas is lapping substantially slower than Hamilton now and the Mercedes are 5.2s apart.

Lap 31: Stroll comes in from third place, and rejoins behind podium rival Ricciardo. Behind them Perez does the fastest lap of the race so far.

Edd Straw: “As expected, Ricciardo has jumped Stroll with that undercut. Racing Point left Stroll out a bit longer as Ricciardo was briefly stuck behind Kvyat so there was a hope it might swing back in their favour. Then Kvyat pitted.”

Lap 31: Bottas is again 1.5s slower than Hamilton and is now 7.8s behind. He’s complaining of major tyre problems.

Lap 32: Bottas comes into the pits and swaps to hards. He rejoins third behind the yet-to-stop Albon.

Lap 33: Hamilton and Albon pit from first and second. Albon comes out behind Ricciardo and Stroll in the battle for third, Hamilton rejoins with a 7.5s lead over Bottas.

Scott Mitchell: “Hamilton really didn’t want to pit but the team was adamant because it wanted to protect against a strong undercut. Both Mercedes are now on hards to the end. Bottas wanted different but obviously pit first.”

Lap 34: Norris goes around the outside of Leclerc at San Donato to take seventh.

Lap 35: After his messy pitstop, Raikkonen reclaims 12th from Grosjean. They bang wheels as the Alfa goes around the outside.

Lap 38: Leclerc, who’s under heavy pressure from Kvyat for eighth, makes a second pitstop and drops to 11th behind Vettel.

Lap 41: Mercedes tells both its drivers to avoid the kerbs to protect tyre integrity.

Lap 44: Stroll crashes out of fourth place at the Arrabbiatas, bringing out the safety car. Bottas comes straight into the pits, a move everyone behind him matches except Leclerc.

Lap 45: Hamilton makes his stop next time around and is able to rejoin still in the lead.

The race is red-flagged again.

Restart: Bottas makes a slow getaway and falls behind Ricciardo into third. Perez takes fourth from Albon, although the Red Bull passes him back further around the lap. Raikkonen and Grosjean jump to eighth and ninth, Russell falls to last.

Lap 49: Bottas repasses Ricciardo for second into San Donato, while Perez fails in a bid to take fourth back from Albon in similar style.

Lap 49: Eighth-placed Raikkonen is given a 5s time penalty for a pit entry infringement prior to the red flag.

Lap 51: Albon goes around the outside of Ricciardo’s Renault at the first corner and claims third.

Scott Mitchell: “Excellent move from Albon. His first F1 podium is now within his grasp. Alex has made his life so much harder than it needed to be today and he has properly earned this.”

Lap 51: Grosjean loses another place as Vettel takes 10th from him.

Lap 59: Hamilton secures victory ahead of Bottas and Albon.

Scott Mitchell: “Big celebration from Red Bull on the pitwall, and a little fist pump from Albon. A congratulatory message from his engineer and team boss Christian Horner. ‘Thanks for sticking with me,’ Albon says.

“Like with Gasly’s victory last week, I’m pleased for Albon and his milestone result. Yes, Verstappen retired. Yes, it should have been simpler. But he did it. That’ll be a huge weight off his shoulders.”

Lap 59: Raikkonen loses eighth to Leclerc when his 5s penalty is applied but is classified ninth ahead of Vettel. 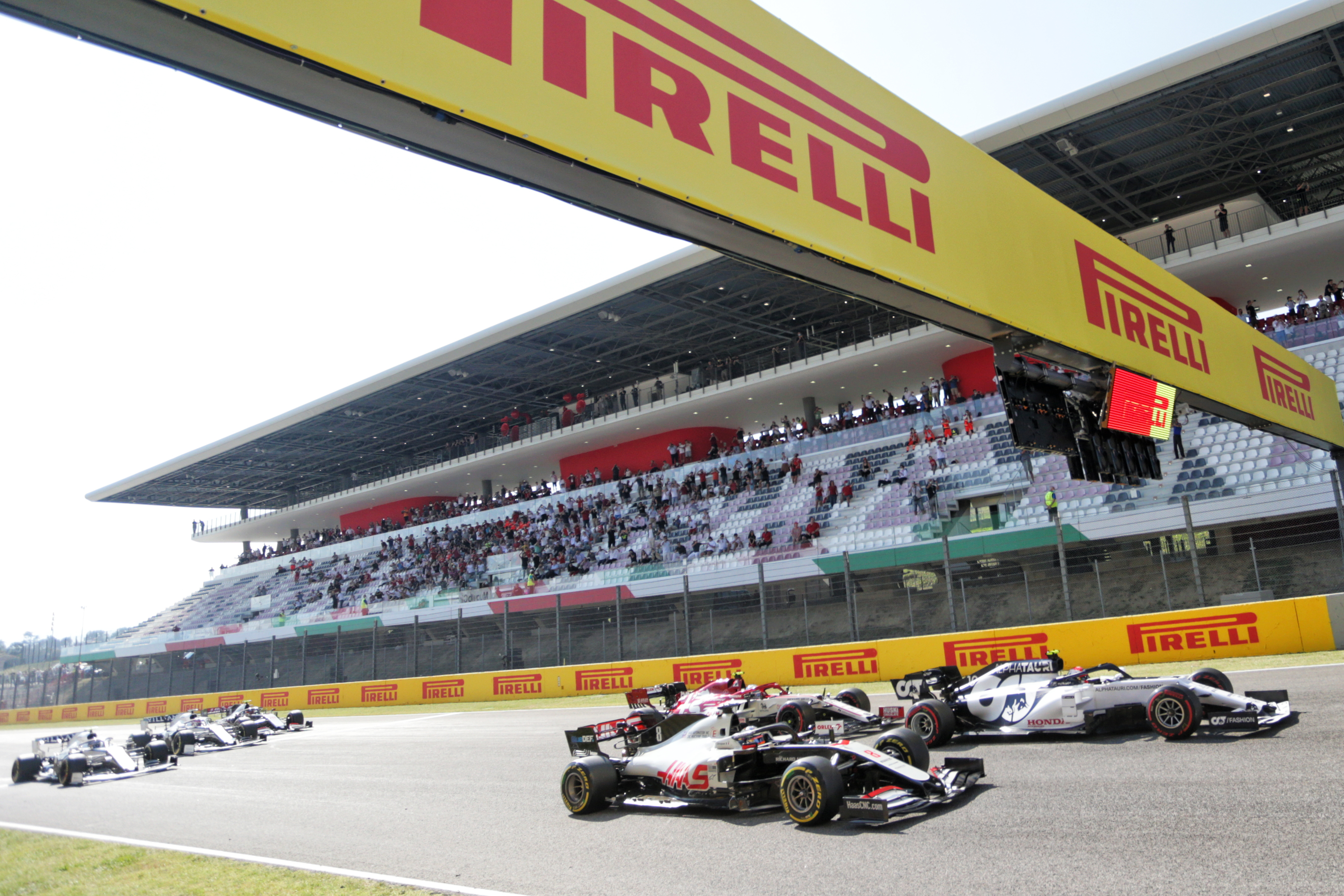