Nobody at the Ferrari Formula 1 team expected to be as strong on the streets of Baku as it had been during the Monaco Grand Prix weekend two weeks ago.

But despite a chaotic session helping Charles Leclerc to top qualifying, both he and team-mate Carlos Sainz Jr reckoned the car had the pace to take pole position in a straight fight.

The question is, why?

Monaco played to the strengths of the Ferrari, which is superb through lower-speed corners and rides bumps and kerbs beautifully. With it being the least power-sensitive circuit on the calendar, the disadvantage of the Ferrari power unit was negated, hence its strong form.

Baku is also a street circuit, so those Ferrari strengths still apply but it was felt that the long straights – specifically the 1.4-mile drag from Turn 15 to Turn 1 – would count against it. Yet Ferrari made it work.

Sainz, who was frustrated to have his Q3 compromised by crashing after Yuki Tsunoda hit the wall at Turn 3, put this performance down to the car’s mechanical grip levels allowing it to run a low-downforce configuration around what is an aero compromise circuit set-up wise. 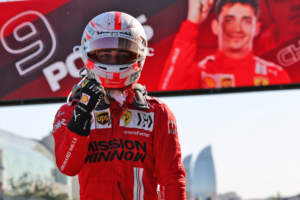 “One of our weaknesses is medium and high-speed corners, and here there’s not one single one of them. We are obviously exploiting well the potential of the car.

“And it’s a very drivable car, it’s giving me confidence. I’m just enjoying driving it, so obviously I’m disappointed that I could not extract a bit more from it when it counts under the circumstances.”

The speed trap figures back this up, with Ferrari showing strongly in all of them even though Sainz’s mighty 214mph figure at the finish line can only have come from a significant tow. Leclerc was also second fastest in the first and second sectors and, thanks to his tow, third-fastest in the final one, showing the car worked well around the lap.

Sainz qualified fifth, 0.358s behind his team-mate. While Leclerc was uncomplimentary about his pole position lap given he made several mistakes, he was assisted by a tow from Lewis Hamilton on the run from Turn 15 to the finish line.

Although Leclerc would have come under threat for pole position had Tsunoda not crashed and caused a red flag, Sainz was adamant that there was more pace to come.

He said he was a tenth-and-a-half up on his previous best when he lost control at Turn 3 in response to Tsunoda hitting the wall, while Leclerc was also on course to improve having just set the fastest first sector of all when the session was red flagged.

Sainz accepted that “you might think we were lying” about Ferrari’s expectations, but this was not a case of sandbagging. The whole team was genuinely surprised that the trade-off worked so well.

“It’s important for us to confirm our progress and the team overall is in good shape,” said team principal Mattia Binotto.

Race pace, of course, is different to single-lap pace and running the lower-downforce rear wing could come at a price on Sunday in terms of how much is asked of the Pirelli tyres. But in one-lap trim, Ferrari was legitimately – and unexpectedly – fast in Baku.