Valtteri Bottas says has no idea why he is so slow at Formula 1’s Azerbaijan Grand Prix and suspects “something is wrong” because he will crash if he pushes harder.

Bottas qualified 10th in Baku having failed to make the progress on Saturday that Mercedes team-mate Lewis Hamilton did. 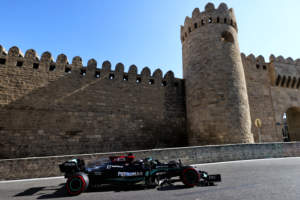 Both Mercedes drivers ended Friday practice outside the top 10 and were lacking pace in final practice, in which Hamilton’s third position was flattered by a huge tow on his last push lap.

But come qualifying Hamilton was able to find significant gains and eventually qualified second, while Bottas was slowest of the runners in the final segment.

“It was pretty messy, as expected here, with the red flags, yellow flags, everything, and I missed the last run like many others,” said Bottas.

“But something is still not right. I’m so far off the pace and I have no clue why. I have no explanation.

“I’m losing at every corner. If I push harder, I’m in the wall. So that’s the limit.

“It’s strange. Coming here I thought we would be fighting at the front. Lewis is at the front now in the fight and I should be as well.

“I have no explanation. I think something is wrong.”

Bottas was running a slightly different rear wing to Hamilton having opted for a higher-downforce set-up but team boss Toto Wolff said it was not a “big disparity”.

Mercedes will not be allowed to make major changes before the race because of F1’s parc ferme rules, unless it commits to a pitlane start.

Trackside engineering director Andrew Shovlin said Bottas’s car had not responded as expected to any of the team’s changes through the weekend.

“Valtteri has had a tough weekend from the word go,” said Shovlin.

“We need to pick through his car to try and understand where the issue is as he’s just not got the grip that Lewis has had, regardless of where we have put the set-up.”

Bottas was not helped by missing out on a tow on his first run, which was all that counted in Q3 because of a late red flag.

Mercedes’ system of alternating when each driver gets to choose their position on-track in qualifying gave Hamilton that choice in Baku so he unsurprisingly opted to run second.

Bottas had dropped behind another car for his second run in Q3 but was unable to complete the lap.