A “gutted” Lando Norris has described his grid penalty for Formula 1’s Azerbaijan Grand Prix as an “unfair ruling”, after he’d done what he felt was “exactly the safest thing to do”.

Norris was penalised for crossing the start-finish line after the red flag had come out for Antonio Giovinazzi’s crash in the first segment of qualifying.

He was preparing to start a flying lap when he saw a light panel that changed to red just as he was approaching the start of the pitlane entry.

Norris asked over the radio whether he should pit but did not receive an answer in time and decided against it, so stayed out.

Crossing the start-finish line meant he breached red flag rules as drivers are supposed to return to the pits immediately.

Though the normal penalty for that is a five-place grid drop, Norris only received a three-place penalty due to the stewards acknowledging he had “only a very short time to react”, but he said even that was too harsh.

“It’s a tough one, because at the speeds we do, you have to make such a quick decision [regarding] what’s the best thing and safest thing to do,” he said.

“And I feel like what I did was exactly the safest thing to do.

“I did everything I thought I should have done.” 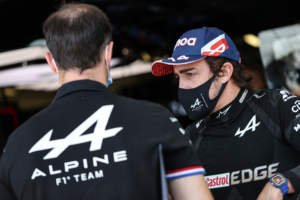 Norris said the stewards need to be more understanding in those scenarios and believes a reprimand was a more representative consequence.

Instead he will now start ninth not sixth and also received three penalty points for the incident, taking his total to eight for the previous 12 months – four penalty points short of an automatic one-race ban.

When asked by The Race about the licence points for such an incident, Norris stressed he “didn’t put anyone in harm’s way”.

“He didn’t put anyone at risk, he didn’t gain any advantage” :: Andreas Seidl

“For some situations they should actually rethink what’s going on.

“It shouldn’t ruin my race for having to make this kind of decision.

“It’s my opinion that’s a bad decision or just an unfair penalty, an unfair ruling, but it is what it is, I can’t do anything about it.”

Norris had the support of his team in the aftermath of the penalty.

“It doesn’t matter if you speak about the grid penalty or the penalty points, as Lando said, we clearly disagree receiving a penalty like this, ruining our race for what actually happened,” said McLaren team boss Andreas Seidl.

“I don’t know exactly why the stewards have no room to do a different penalty there, if they think they have to give a penalty.

“If you look at what actually happened, Lando had probably a second to decide in a high speed section of the track, when the red flag came out, what to do.

“In the end, he decided to go for the safe action. He didn’t put anyone at risk, he didn’t gain any advantage.

“Not having the possibility for example to receive a reprimand for that…if there needs to be apologies, it’s disappointing.”