Esteban Ocon beat Sebastian Vettel to claim his maiden Formula 1 victory in a thrilling Hungarian Grand Prix, aided by a resilient defence from his Alpine team-mate Fernando Alonso against a recovering Lewis Hamilton.

Hamilton was the sole driver on the grid when the race restarted following a red flag period following a dramatic opening lap multi-car collision, triggered by his Mercedes team-mate Valtteri Bottas.

Bottas lost control of his Mercedes as the field approached a damp Turn 1 braking zone and piled into McLaren’s Lando Norris, sending him into championship leader Max Verstappen. 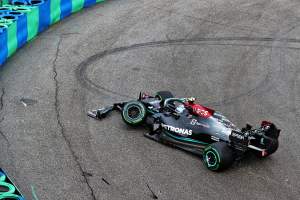 Behind them, Lance Stroll misjudged his braking amid the chaos and slammed into Charles Leclerc’s Ferrari who was then tipped into Daniel Ricciardo.

Unsurprisingly the red flag was flown, and Bottas, Perez, Norris, Leclerc and Stroll were unable to take the restart.

The team was able to make some repairs to Verstappen’s car but he still had to take the race restart with some damage to his Red Bull and outside of the top 10.

With the track drying rapidly, the entire field bar race leader Hamilton switched their intermediate tyres to slicks on the lap prior to the standing restart.

This left the bizarre scenes of Hamilton as the only driver on the grid as the race resumed while his rivals jostled for position in the pitlane.

EVERYONE PITS on the formation lap!

Lewis Hamilton is the ONLY driver to take the start 😱#HungarianGP 🇭🇺 #F1 pic.twitter.com/PQuuy5nfUe

George Russell initially led that pack but he was later ordered to drop back for overtaking cars while in the pitlane – due to the position of Williams’ garage.

It was Ocon and Vettel who emerged in the lead when Hamilton made his pitstop at the end of the first lap of the restart and dropped to the back of the pack, with Nicholas Latifi completing the top three in the second Williams.

Ocon and Vettel bolted clear of the pack while Hamilton picked his way through the field with on-track passes on Latifi, Mick Schumacher and Yuki Tsunoda – and he then performed an undercut on his title rival Verstappen, as well as Daniel Ricciardo and Russell.

Hamilton then made a second pitstop and emerged in fifth place behind the leading four of Ocon, Vettel, Carlos Sainz and Fernando Alonso.

Hamilton quickly caught up to Alonso but the two-time F1 champion didn’t give up easily and blocked multiple attacks from Hamilton at the Turn 2 and Turn 4 left-handers.

Alonso’s supreme defence for over 10 laps protected his Alpine team-mate Ocon out front, who himself had to withstand race-long pressure from Vettel.

Four-time champion Vettel almost passed Ocon when the duo came up to lap Antonio Giovinazzi but Ocon withstood the pressure to claim his first F1 win and a first victory for the Enstone outfit since the 2013 Australian Grand Prix.

The crucial moment of their duel came during their one and only pitstop of the race as Vettel’s pitstop was a second slower than Ocon’s, the Frenchman emerging just half a second ahead of the Aston Martin driver.

Ocon’s only previous F1 podium was a second place finish at the Sakhir Grand Prix last year and his last race win came in the opening round of the 2015 GP3 season. 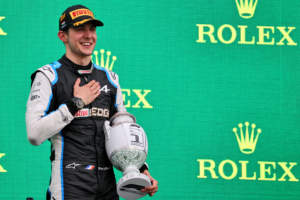 Second place for Vettel marks his second podium since he switched from Ferrari to Aston, but he was audibly frustrated to not get past Ocon after the race and will face the stewards afterwards over wearing a ‘same love’ t-shirt during the pre-race national anthem.

Hamilton eventually passed Alonso with six laps to go, and he soon caught and passed Carlos Sainz two laps later to take the final place on the podium with a tidy move at Turn 1. He wound up just under a second behind Vettel at the finish.

Sainz just managed to hold off Alonso by half a second to claim fourth place, with the AlphaTauris of Pierre Gasly – who took the fastest lap – and Yuki Tsunoda completing the top seven.

Nicholas Latifi drove the race of his life to secure his first F1 points in eighth place, ending Williams’ two-year pointless streak, and his team-mate George Russell made it a double-points finish in ninth place.

A wounded Verstappen could only recover to 10th place, and he loses his points lead to Hamilton. Another victim of the opening-lap chaos, Ricciardo finished in 11th place.