I was misled about ‘fantastic’ Alonso – Ocon

Hungarian Grand Prix winner Esteban Ocon says people gave him the wrong impression about Fernando Alonso ahead of them partnering up at Alpine.

Ocon claimed his first F1 win – and the Enstone-based Alpine team’s first since 2013 – in the rain-hit Hungary race, but it owed much to his veteran team-mate. 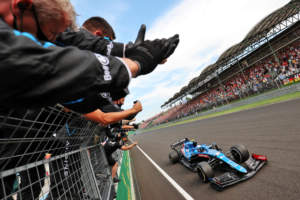 While Ocon led the vast majority of the race after Lewis Hamilton’s tyre setback, Hamilton’s charge through the field looked to seriously threaten his victory.

But Alonso’s spirited defence against Hamilton while running fourth bought Ocon crucial time, and though an aggrieved Hamilton eventually came through, he would finish 2.736s off Ocon in third.

“What can I say? I mean, it’s fantastic,” Ocon said after the win.

“You know, congrats to Fernando as well, because I think the win is also thanks to him, with the fights that he did. So yeah. I mean his teamwork, all that and I think it’s been a fantastic day.”

Though his driving prowess has been unquestionable, Alonso has sometimes been regarded as a contentious character in F1, largely as a consequence of a famously fraught 2007 season at McLaren and thinly-veiled criticism of Honda when it was struggling as McLaren’s engine supplier in 2015-17.

However, Ocon was keen to rebuff misconceptions of Alonso, saying: “It’s been awesome to work with Fernando.

“I mean since the beginning of the year, you know, we’re forming a real shock duo, I would say. We are working together. We are pushing the team, you know, to try and improve and get, you know, closer to the pack in front.

“Everyone told me a lot of things about Fernando before I came but you know, everything’s wrong. So I can tell you he’s a fantastic guy, and I am really enjoying the collaboration we have together.”

42 mins ago IndyCar,Touring Car No Comments