Lando Norris took a sensational first Formula 1 pole at the Russian Grand Prix ahead of Carlos Sainz and George Russell, as Lewis Hamilton wrecked his pole shot with a pitlane crash.

After so much expectation of a rained-off session and a postponement to Sunday, plus most of the rest of Saturday’s timetable – including final practice – being wiped out, the weather actually improved in the lead-up to qualifying and it began on time. 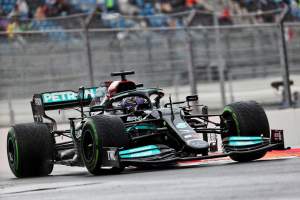 Other than an exploratory effort on wets by Fernando Alonso, everyone went straight to intermediate tyres and the track improved throughout.

Championship leader Max Verstappen did a pair of installation laps then sat out the session, knowing he was guaranteed a tail-end start because of his power unit component changes regardless of where he qualified.

Ferrari’s Charles Leclerc and Williams driver Nicholas Latifi were in the same position, but got as far as Q2 before bailing out.

By Q3, the track was dry enough for slicks to be considered, with Russell first to make the swap.

While he struggled to find pace on them initially, the rest of the Q3 runners still followed suit, with the Mercedes last to come in.

But Hamilton – then on provisional pole with his intermediate-tyre lap – slid into the wall in the right-hander in the pitlane entry and damaged his Mercedes’ front wing.

His front wing is damaged – and he faces a race against time to put in another flying lap #RussianGP #F1 pic.twitter.com/txQInKXk50

As well as slowing his pitstop for slicks while repairs were carried out, the incident also delayed his team-mate Valtteri Bottas as he initially had to queue behind Hamilton’s car.

That left the Mercedes with no time to get their slicks up to temperature, and Hamilton and Bottas could only qualify fourth and seventh respectively – Hamilton also spinning and touching the barrier on his slick lap.

As the chequered flag flew, it still looked uncertain whether slicks would actually be fastest enough to usurp the intermediate runs order of Hamilton leading Norris and Bottas.

But then the purple sector times started to flash up from first Lance Stroll, then Sainz and then Norris.

Sainz surged onto provisional pole for Ferrari, only for Norris to depose him by half a second. Russell then slotted his Williams into third.

Daniel Ricciardo followed up his Monza win with fifth on the grid in the other McLaren, but he does face an investigation for allegedly impeding Stroll.

Fernando Alonso was third in Q2 and sixth in Q3, ahead of Bottas, Stroll, Sergio Perez’s Red Bull and the other Alpine of Esteban Ocon.

The already-known penalties aside, there were few surprises from the first two segments. The Alfa Romeos of returnee Kimi Raikkonen and spinner Antonio Giovinazzi exited from Q1 in 16th and 18th, sandwiching Mick Schumcaher – who was a mammoth 3.9s faster than Haas team-mate Nikita Mazepin.

Sebastian Vettel missed out on getting both Aston Martins into the top 10 by 0.052s, and shares row six with Pierre Gasly – who was spectacularly livid to end up only 12th.