Wins for Hoyer and Siebel in rFactor2 GT Challenge

In a field full of drivers in GT3 McLarens, Michi Hoyer in an Audi R8 GT3 won his second consecutive rFactor 2 GT Challenge race as he took the chequered flag in the sprint event at the Nurburgring, while Alex Siebel won the main race.

The Nurburgring round marked a vital moment in the championship as after this round the bottom five in all of the four splits would be relegated down one and replaced by the top five from the split below.

Siebel, who had zero points heading into this round, was able to keep his place in the top split thanks in part to his triumph.

With only three minutes of the sprint race gone, championship leader Lorenzo Arisi got swarmed by a bunch of cars and was muscled down from his starting position of fifth to a contact-heavy scrap for sixth with Ilias Fernandez.

The pair ran side by side down on the exit of the Mercedes arena section, and Arisi used the outside line for Turn 6 and the inside for Turn 7 to push Fernandez onto the kerb and take sixth back.

But Arisi wasn’t quite a full car length ahead so when Fernandez rejoined the tarmac he tagged the rear of Arisi’s McLaren, sending the championship leader spinning off while Fernandez only lost one position but was given a drive-through penalty. 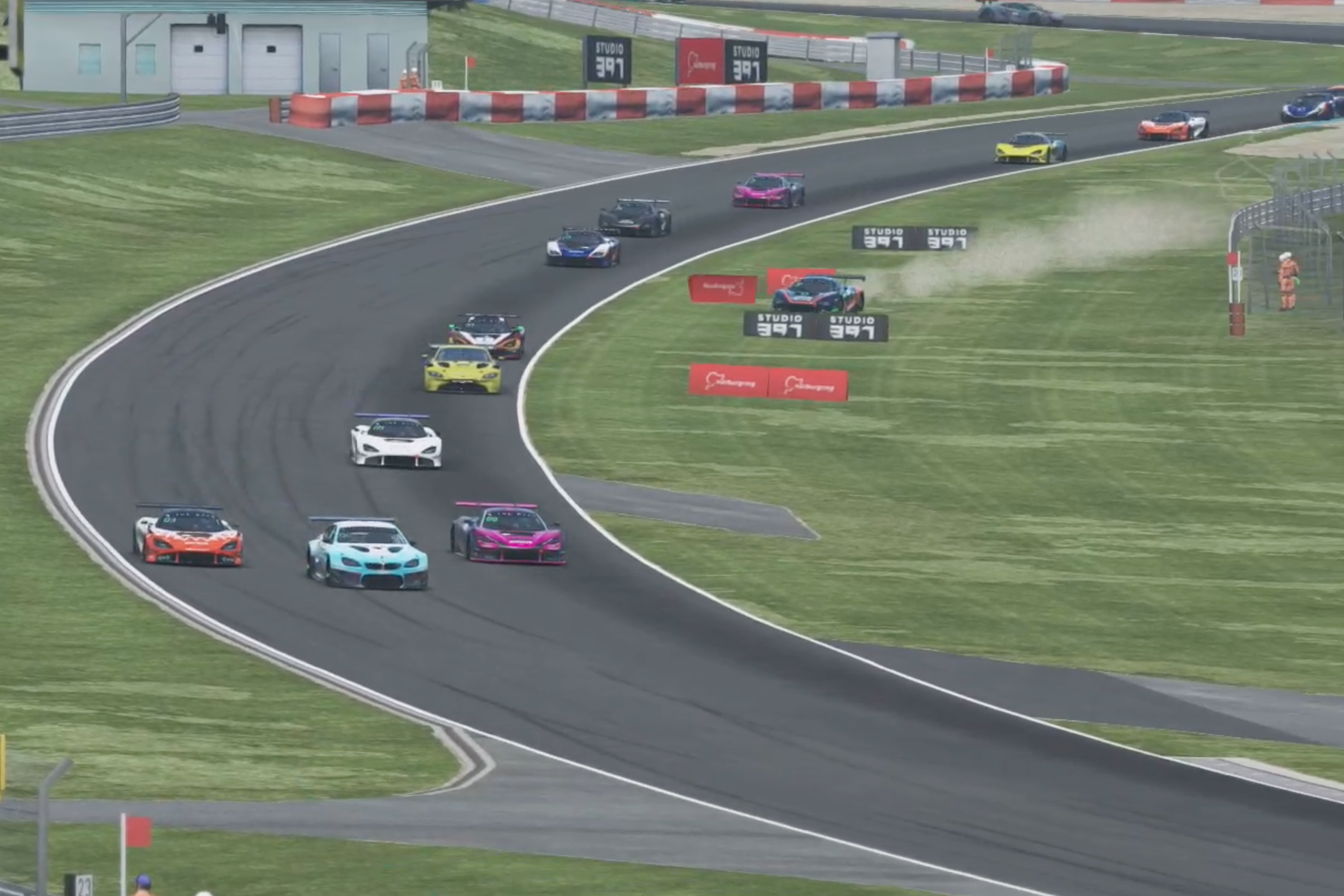 There was little change from lights to flag out front, as Hoyer led from start to finish, with Marcell Csincsik in second and Daniele Cannistraci, who also started this round on zero points, finishing in third.

Tony Mella and Siebel, finishing fourth and sixth respectively, were other drivers who were in desperate need of championship points.

Further down the order, Martin Hemmingson attempted to pass Alejandro Lopez Adorna for the vital 10th place on the final lap by going around the outside at the first corner.

Lopez Arjona tried to push Hemmingson off the circuit but around the subsequent long left-hander he ran out wide enough that Hemmingson could put the power down on the inside and take 10th place, and therefore pole position for the reverse-grid main race.

In that race, Lopez Arojona provided an instant shock as he passed Hoyer and Csincsik, the top two from the sprint, within four corners to take ninth place.

Csincsik in 10th later tried a move on Lopez Arjona into the first corner as Hoyer and Arisi behind went late on the brakes to try and capitalise on the battle in front of them.

Three drivers all trying to hug the apex at the same time inevitably resulted in contact, with Csincsik being hung out to dry on the outside and then tagged and half-spun.

Hoyer came out on top and reclaimed 10th place, with Csincsik sent down to 15th. Arisi was judged to be at fault and was given a drive-through penalty.

Pole-sitter Hemminsen went unchallenged for the first 30 minutes, but came under threat from Siebel and later Michal Sedlacek as well.

With just eight minutes to go Siebel got a much better exit than Hemmingsen onto the long back straight and was able to make the move stick into the chicane, with Sedlacek following him through to take second. 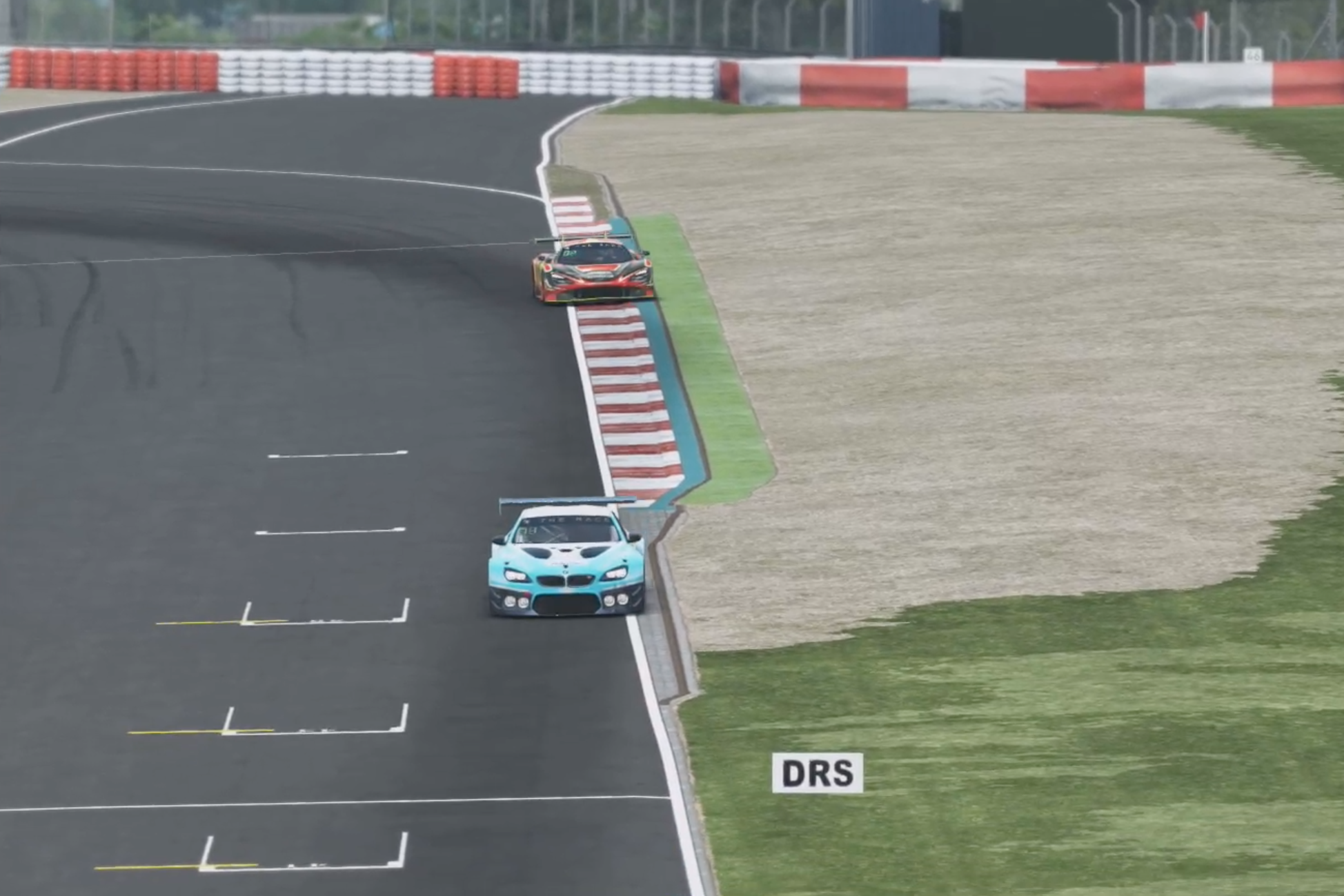 Hemmingsen finished third, with Cannistraci picking up fourth place. The spot had been occupied by Vojta Polesny earlier, but he had gone too late on the brakes at the first corner in an attempt to overtake Kevin Rotting and T-boned Luca D’Amelio as a result, earning a drive-through penalty.

Williams JIM Esports driver Rotting had moved up to second as a result of the clash, only to receive a drive-through penalty of his own – as did Mella, who had been running in fifth.

Lopez Arjona’s impressive run was cut short as he retired with a blown engine whilst downshifting as he ran in seventh place.

The next GT Challenge Race will take place around the Virginia International Raceway in two weeks’ time and with the five top drivers from the second split taking the places of the bottom five in the standings from the top split.

Before then the main championship, the GT Pro Series, will take to VIR next Monday.