Defending F1 Esports champion Jarno Opmeer has claimed his second consecutive win in the 2021 Pro Championship to take the lead of the drivers’ table.

A race win and a fourth place result across yesterday’s two races for both Opmeer and Aston Martin driver Lucas Blakeley meant they entered the third round tied on 37 points.

It was a Mercedes 1-2 in qualifying for the third race, run at the Red Bull Ring, with Opmeer beating his team mate Dani Moreno by 0.047s. 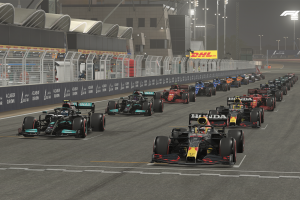 The Mercedes duo were able to maintain track position over Rasmussen behind them until it started raining and the drivers switched over to the intermediate tyres.

That meant the second Mercedes driver of Moreno was forced to stay out on the slick tyres for one lap longer in order to avoid double stacking the pitstops. That extra lap compared to the majority of the other drivers dropped him from second to 10th place.

An extended stint for Moreno promoted Rasmussen up to second place but he wasn’t able to mount a challenge on Opmeer, giving the Dutchman his second win in three races.

🇦🇹 It's two-in-a-row for @jarno_opmeer! A DOMINANT #F1Esports victory for the reigning champ in Austria, who takes the lead of the championship 🏆

Behind Rasmussen in second was Bari Boroumand for McLaren in third, who took his maiden podium finish in F1 Esports. Blakeley finished in fourth for the second time in two races.

The 2019 champion David Tonizza was fifth across the line but a three-second time penalty for exceeding the track limits on too many occasions demoted him to sixth and behind Alvaro Carreton (Williams).

It wasn’t an ideal race for last year’s constructors’ champions Red Bull because Marcel Kiefer sustained front wing damage when he braked late for Turn 3 and went into the side of Boroumand’s McLaren. That gave the German an extended pitstop and meant he finished outside of the points positions.

As a result, Red Bull is third in the constructors’ championship with 43 points compared to 55 for Aston Martin and 78 for Mercedes.