Both Red Bull drivers took their first race wins of the season in the latest rounds of the F1 Esports Pro Championship.

That moved Red Bull up to second in the teams’ championship and reduced the gap to current leader Mercedes.

Red Bull’s Frederik Rasmussen was the fastest in qualifying at Silverstone with Nicolas Longuet for Alpine in second and 0.051s slower.

Championship frontrunners Lucas Blakeley and Bari Boroumand made up the second row of the starting grid.

Dani Moreno was the leading Mercedes driver as he started in fifth place but entered the pits one lap later than Boroumand to pass him for fourth.

That put him second of the drivers who had stopped at that time, which meant he was able to easily overtake Longuet who headed that pack and didn’t have any DRS down the Hangar Straight.

Moreno also undercut Blakeley by a lap and the Aston Martin driver exited the pits behind him.

Moreno cleared race leader Rasmussen with the aid of DRS on the run towards Stowe. The Red Bull driver bided his time though and retook first place around the outside of Stowe on the final lap of the race to take his first win of the season.

UNBELIEVABLE SCENES IN #F1Esports! 🤯@DaniMorenoF1 is slow out of Chapel and @G2Frede takes back the lead to WIN in the dying moments of the race!

What a result for @redbullracinges who secure their first win of the Series 👏 pic.twitter.com/JFsK8wmX0f

Moreno held onto second place with Blakeley completing the podium.

A shock Q2 elimination meant reigning champion Jarno Opmeer started the race down in 15th. He adopted the alternate strategy and went long on his first set of tyres which initially meant he rejoined the race in 16th.

However with the fresher tyres he was able to work his way back up into the points places and cross the line in ninth.

The second race was run at Monza and it was a return to form for Opmeer as he started from pole position with Marcel Kiefer in second place.

Yet again Opmeer carried out a different strategy to the rest of the grid as he delayed his first stop so that he could end the race on grippier tyres and make up several positions in the final few laps.

His late stop meant he fell to 10th place whereas Rasmussen was able to move up to the front of the pack as he stopped on lap four of 19. That undercut meant Red Bull held a 1-2 position with Kiefer leading.

On the penultimate lap Opmeer cleared Alpine’s Fabrizio Donoso for third place and had only the two Red Bulls ahead of him.

Heading into the Rettifilo chicane on the final lap both Mercedes of Opmeer and Moreno slipstreamed past Rasmussen.

David Tonizza was also in the chasing pack but hit Rasmussen in the middle of the chicane, causing Rasmussen to drop down to ninth place. 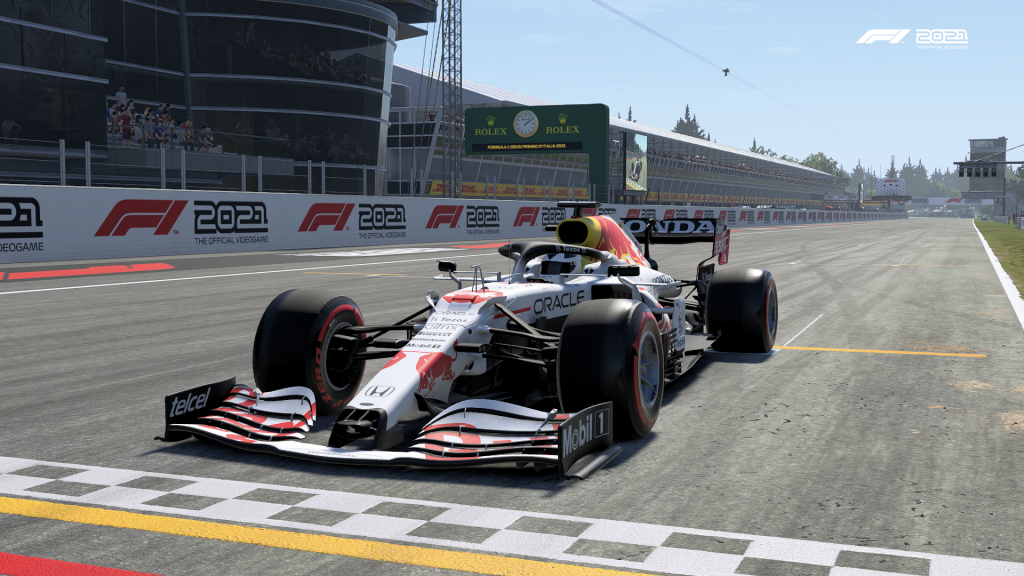 Despite that Red Bull went on to take its second race win in a row as Kiefer kept both Mercedes drivers behind him.

Moreno crossed the line in second but he was awarded a post-race penalty by the stewards for leaving the track and gaining an advantage which dropped him down to sixth.

Another INCREDIBLE finish in #F1Esports!@marcelkiefer_ holds on for victory as after an incredible drive @DaniMorenoF1 doesn't have enough track left to get the move done. It's back-to-back wins for @redbullracinges 🏆 pic.twitter.com/yo0Q1blzO9

Third place for Blakeley means that over the two races the Scotsman outscored Opmeer. So the gap between them in the drivers’ championship is just four points with Opmeer still at the top of the table.

In the teams’ championship Mercedes is still in first but now only 19 points ahead of Red Bull which, thanks to two race wins, has moved ahead of Aston Martin to second in the points standings.