Helio Castroneves won the IMSA SportsCar Championship in his last appearance for Team Penske, despite he and fellow title winner Ricky Taylor going as far as 11 laps down in the 12 Hours of Sebring.

Despite all of Castroneves’ wins, it marks a first overall major title in his car racing career which stretches back to 1992.

He’ll leave team Penske next year, where he has raced through CART and IndyCar since 2000 as it pulls out of IMSA, with outgoing champion Juan Pablo Montoya also bowing out of the team at least as a driver.

After four straight wins and a second place in five IMSA races, Castroneves and Taylor entered the final round of the championship in the lead, with Renger van der Zande and Ryan Briscoe two points behind.

Neither cars were a factor for the win as both hit trouble, and the #55 Mazda of Harry Tincknell, Jonathan Bomarito and Ryan Hunter-Real took victory.

The 12-hour race was decided in the last 30 minutes as the Oliver Jarvis/Olivia Pla/Tristan Nunez Mazda suffered a heartbreaking puncture, handing the victory to the #55 and preventing a 1-2 for the manufacturer before it slims down to one car in 2021.

The prestigious event – moved back from March due to the coronavirus pandemic – attracts a number of star co-drivers as teams expand from two to three drivers and some of these played a role in the championship outcome.

Within the first hour the hopes of the #7 Acura car of Castroneves/Taylor and IndyCar frontrunner Alexander Rossi for this race faded as they had to pit with an intercooler issue. 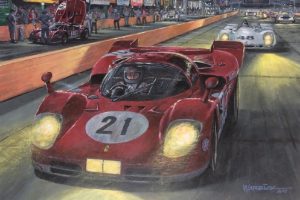 Despite  the #7 pulling four of its 11 laps in lieu back, the real turning point in the race came when the Cadillac of van der Zande and Briscoe – co-driven by freshly crowned six-time IndyCar champion Scott Dixon – suffered a drama.

Jarvis made an opportunistic move on Dixon for third place at Turn 10 but the two collided with just over seven hours to go, puncturing Dixon’s right rear tyre.

That took the Wayne Taylor Racing car behind the pitwall for repairs, and when it returned it was only able to finish in seventh, one spot ahead of the #7 car, enough to give Castroneves/Taylor the title.

“For me, being able to finish the championship with an amazing organisation, an amazing group of people and true friends that last forever,” Castroneves told NBC as he gears up for a switch to Meyer Shank Racing in IndyCar next year.

“It’s a new beginning for me. But this I’ll never, ever forget. Can’t thank enough everyone, and Roger [Penske] of course. What an incredible journey.”

Meyer Shank Racing and Wayne Taylor Racing will take over the Acura works backing from Penske in 2021, so a title defence looks likely with his new team for Castroneves.

Both Castroneves and Montoya proved their worth as they set the fastest race laps in that order, despite the influx of current IndyCar stars taking them on in this blue-riband event.

Montoya, winless in 2020, had led but was dive-bombed in the last three hours by Pipo Derani – who has suffered multiple collisions with Penske cars in recent races – and had to settle for second with Dane Cameron and Simon Pagenaud alongside. Jarvis/Nunez/Pla rounded out the top three.

Take a look at what went down between Pipo Derani and Juan Pablo Montoya. @IMSA // #Sebring12 pic.twitter.com/kJaMQqRu3F

Patrick Kelly took the LMP2 title with a class win and ninth overall, while Fred Makowiecki and Nick Tandy took their third Sebring 12 Hours win in a row in GTLM.

It was a fitting way to end Porsche’s involvement in the class as it pulls out for 2021. Tandy said: “To do a 1-2 and for the whole team, everybody Porsche, everyone who has put seven years of their lives as much as we have into this program. It’s just a perfect finish, really.”