Like the movie Talladega Nights from 2006, the new TV show about NASCAR on Netflix released earlier this week – The Crew – has its critics in its own time.

But, like with Talladega Nights, another maligned appearance on screen isn’t necessarily a bad thing for NASCAR, even if it’s a journey to understand why.

The Crew stars King of Queens and Paul Blart: Mall Cop ace Kevin James, and is a live-studio-audience sitcom – unusual for a Netflix original, I know. It’s mostly set in the team’s factory (or shop as they’re known in NASCAR) with James playing the role of legendary driver turned crew chief leading Bobby Spencer Racing.

The team’s owner Bobby Spencer cedes control to his daughter Catherine in the first episode, and she engages in a power struggle with James’ character – also called Kevin, of course – in a bid to modernise the small team towards being a regular contender instead of running near 30th in the points standings.

The series does address real-life NASCAR struggles, like trying to be a smaller team taking on the might of the major outfits – NASCAR has lost a number of those teams in recent years.

It also deals with topical things like moving sponsorship away from what people might link to the southern roots of NASCAR for a more ‘corporate America’ theme, as the team takes on ‘Fake Steak’ substitute as its main sponsor much to the outrage of everybody other than Catherine. 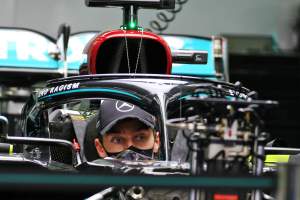 The narrative of an up-and-coming driver putting pressure on the team’s regular pilot is also explored when driver Jake suffers a concussion and is replaced by female driver Jessie. Her value to sponsors despite being slower than the lead driver is a theme which can reflect real life and is a worthwhile direction for the series’ writers to take.

Where the series falls down though is through poor writing – with tumbleweed-inducing comedy, perhaps surprisingly for a James jaunt – and through a lack of dynamism. It appears very scared of change and full of ‘dad humour’.

NASCAR helped produce the series but the only real-life footage is mere seconds used as a link between scenes. Instead of allowing the show to feel one-dimensional at the shop, it could have made much greater use of NASCAR’s archive to break up the monotony. In fact, pull this show out of a NASCAR shop and you could mistake it for any sitcom, really.

Anyway, I’m not a regular TV critic and this isn’t IMDB (the userbase of which has rated it 6.5/10) so we’ll move on to assessing the benefits for the series and motorsport.

While NASCAR appears to be riding the crest of a wave brought about by its fantastic equality campaigning last year and the addition of Grammy-winning artist Pitbull and basketball legend Michael Jordan among its team ownership ranks, it had its worst ratings for the Daytona 500 since records began in 1979.

That data needs to be contextualised with the fact that there was a huge rain delay, but it’s still hardly a glowing endorsement for its biggest race of the year.

NASCAR was boosted astronomically back in 2006 after the release of Talladega Nights, the Will Ferrell blockbuster that also upset a number of NASCAR community members for its poking fun at the championship as a whole.

The fact that Ferrell jumps into a car mid-race and finishes on the podium in a backmarker team to open the film sets the tone and tells you everything you need to know about the accuracy the director (future Academy Award nominee Adam McKay) and producers were going for.

Despite its often borderline offensive indulgence in stereotypes, Talladega Nights delivered a comical version of NASCAR to a huge untapped audience. It’s still celebrated today for its comedy, but as much in NASCAR circles for the boost in popularity it provided.

The Crew could do a similar job in 2021, albeit on a smaller scale, just as TV is compared to cinema.

“I saw some people, reporters writing bad stuff about it but I didn’t really agree with that,” says Cup Series race winner and Penske driver Ryan Blaney, who appears in the show. “It’s supposed to be a light-hearted, funny sitcom show in front of a live audience.

Keep an eye on your wings around @Blaney, @KevinJames!

“I think they did good. They’re not really trying to make us look bad.

“I think it’s really gonna get people watching NASCAR. I mean, how many subscribers does Netflix have, it’s going to be a lot of episodes on that.

“People laugh, but at the same time, they’re not making a mockery out of NASCAR, they did a good job of really doing their research and then sprinkling in details of kind of how a little bit of shop stuff works, on the sponsorship side.

“And yeah, they might have some jokes in there, but it’s all in good fun. Don’t get upset with it all.” 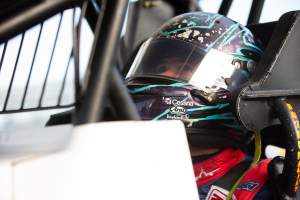 Larson interview: On his fall, redemption and the future
Read more

OK, it’s a bit wooden, makes bad jokes that non-NASCAR fans often won’t understand and its portrayal of Catherine as the team owner constantly undermined and under-backed by men feels offensive even if it exists as a criticism of society.

But pretty much every frame has a NASCAR logo or sponsor included, and in places it does do a good job of addressing real-life issues in and out of NASCAR. The concussion storyline of the lead driver Jake and him attempting to cover it up harks back to Dale Earnhardt’s days and a similar instance happened last year when IndyCar driver Oliver Askew raced on not knowing he had a concussion.

The plight of women drivers in motorsport, the adversity small teams face and an ex-pro getting to grips with a new life on the sideline are all familiar tales in motorsport. Those behind The Crew have got many of the ingredients correct, even if ultimately the bread hasn’t risen.

With a crew chief like this, you know the team is gonna be great.

The show is ultimately underwhelming, the critics are totally right on this one. The Guardian’s review concluded: “It is early days for The Crew, and a lot of now-classic comedies took at least a season to bed in, but this seems to lack the secret ingredient that might make you root for Kevin and the team. It is all a bit 10th place.”

Like Talladega Nights it will cause rage among fans at times, but in years to come it could well be seen as something that opened up a new audience to stock car racing.

Whether it can do that on the scale of something like Drive to Survive has for F1 is yet to be seen.

It’s not a documentary like that is, but opening up to an enormous Netflix audience is a key factor in the equation of its success, something The Crew may share if it can catch on.