Why Honda’s MotoGP season is going even worse than expected

Even before the 2021 MotoGP season started back in Qatar, the bosses at Repsol Honda had an idea that, much like last year, this season wasn’t going to go according to plan.

The main reason was that previously-dominant champion Marc Marquez would miss the opening races of the year, still recovering from injury, leaving the role of team leader to Honda newcomer Pol Espargaro.

However, while Honda might not have been expecting the same level of success that it enjoyed in Marquez’s last full season – in 2019, when he won the title with five races in hand – team boss Alberto Puig nonetheless went into the season bullish about its chances.

“We hope that Pol brings results – that’s why we signed him,” he insisted at the team launch.

“He’s got good results in the past and he’s no longer a kid. We want him to fight with the other riders and also with Marc, who is the benchmark.”

That’s a view that was echoed by Espargaro even after his first race at Honda, where he branded his 13th place finish ‘disgusting’ – but then immediately claimed that his title aspirations were still very much alive.

“In a place where normally Honda is struggling, our performance has been outstanding,” he said of the Qatari race.

“The only problem is that we are not putting everything together plus my mistakes, but I feel I am seated on the bike I was looking for in the past years, and I feel strong as to be world champion at the end of the year.”

Five races later, though, and the view from within the Repsol Honda camp is a very different one as it head to Espargaro’s home race, with the 29-year-old born and raised literally within earshot of the Montmelo circuit near Barcelona.

Espargaro now presents a very different character to his bullish mood of two months ago.

In a rather sad picture as the series heads into this weekend’s Catalan Grand Prix, he’s talking now of gradual improvement and more consistency rather than winning titles in 2021.

“After a difficult race, sometimes the best thing is a race the very next week,” he said of Barcelona after finishing a distant 12th at Mugello last weekend.

“We need to keep moving, this is MotoGP and we return to action again.

We approach this new weekend the same way as the previous; with our full focus and the goal to improve.

“In Mugello we found some things which will help us moving forward. We keep working, we keep improving, we keep moving.”

So where exactly have things gone so wrong for the 2013 Moto2 world champion in particular?

Simply put, Espargaro is the latest victim of one of the paddock’s worst-kept secrets: the Honda RC213V is a very hard motorbike to ride.

More specifically, right now that’s manifesting itself into a lack of rear grip that means that he’s unable to ride the bike as aggressively as he needs to. Ironically this is the area that should have allowed him to be strong on the Honda given his aggressive style.

“I would highlight not so much what it’s costing me, but rather that defect that we have and share with some other factories: the lack of rear grip, especially when entering the curves,” said Espargaro before Mugello.

“It’s something that does not allow us to be fast in the centre of the turn and to exit accelerating.”

It’s something that Honda has admittedly been working to improve, and it seemed to have made a step forward following the first post-race test of the year at Jerez last month.

That potential hasn’t been realised since, though, and things haven’t got any better. 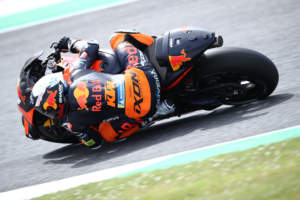 Fuel, frame or fluke? – How a MotoGP manufacturer bounced back
Read more

The Mugello the damage limited by the return of symmetric Michelin tyres. As alluded to by Espargaro, not just Honda but also his former employer KTM have been left unhappy this year by the tyres Michelin has proved.

But unlike Honda, KTM found its speed again at Mugello when the old tyres returned and Miguel Oliveira scored a podium finish.

Espargaro’s problem, of course, is exacerbated by issues elsewhere at Honda. Marquez is still not fully fit, and it’s going to take some time before he gets there. He’s got a few more months of recovery to go, and Honda will be hoping that he returns from the summer break in early August ready to start fighting for wins again. 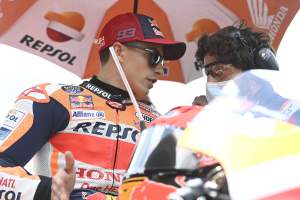 But Marquez’s problems have been persistently dogged by further complications, though, with nerve issues in a shoulder that’s received significant trauma already reportedly delaying his ability to be as physical as the Honda needs him to be.

Elsewhere in the Honda fold, it at least looked like satellite rider Taka Nakagami had made a breakthrough last weekend at Mugello, the LCR rider finding some pace in the race and potentially looking set to get stuck into the fight for the podium until a crash ended his hopes.

That’s some welcome relief for him and his LCR Honda team after a difficult start to the season, but it’ll come down to this weekend’s races at Barcelona to prove whether it was a mere flash in the pan or whether it really marks a return to his 2020 status as unofficial team leader.

And while things have been improving on one side of the LCR Honda garage, they’ve been getting even worse on the other as Alex Marquez continues to have a season from hell.

Struggling to stay on the bike this year, he’s managed to perform when he can finish – but with three crashes from five races, the scales are tipping in the opposite direction for him.

It all means Honda’s worst period in the sport is dragging on.

It’s now 20 races since it last won in MotoGP, with only two podiums courtesy of Alex Marquez in the interim – and until his older brother gets back to fitness, it’s hard to see that changing.