Why does Valentino Rossi keep crashing? - The Race
Skip to content
MotoGP

Why does Valentino Rossi keep crashing?

Since his return to Yamaha in 2013, Valentino Rossi has built a new style of MotoGP career for himself, challenging at the front of the championship not through outright speed but through consistency and being close to podium contention nearly every weekend.

In fact, that consistency has become such a Rossi trait that it almost handed him his last championship success in 2015 – a year where he took four wins to Jorge Lorenzo’s seven and Marc Marquez’s five but managed to keep the fight going until the final round.

However, that reliable form has deserted him in recent rounds this year, with Sunday’s crash out of the French Grand Prix marking his third DNF in three races, after similarly making mistakes in both his home race at the Grand Prix of Emilia Romagna and last time out in the Catalan GP.

While he was set for the podium at Barcelona and might have been even able to swing a surprise race victory given the way eventual winner Fabio Quartararo faded at the end, Rossi’s race at Le Mans on Sunday came to a crashing halt before it really got underway.

Falling at the notorious Dunlop chicane on the opening lap in wet conditions, he was left frustrated afterwards.

“It was a great shame,” Rossi said post-race, “because a crash like this on the first corners is easily done in half-and-half conditions.

“You don’t understand your potential yet, if you’re fast with the bike, how you’re feeling with the bike – nothing. 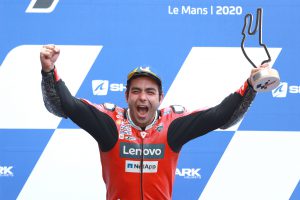 “But I started well, and I was already in a good position. I entered the second corner very slowly, like everyone else.

“We were all taking it easy, because these were very difficult conditions. It was very cold with the rain. Unfortunately I lost the rear.

“It’s a shame and I’m also a bit unlucky in this period, because we didn’t take any points in these last three races, whilst my speed and potential weren’t so bad.”

While he was quick to pin the blame for the fall on the Yamaha M1’s abilities (or lack thereof) in mixed conditions, it’s still telling that Rossi’s inconsistency has taken a massive downward spike not just in 2020 but in recent seasons.

He’s already crashed out more times in 2020’s nine races so far than he did in his first five years back at Yamaha – and he’s well on track to match 2018 and 2019’s record joint high score of eight falls.

It’s hard not to argue that ‘The Doctor’ isn’t quite as precise as he once was.

Not only that, but arguably his two best chances of adding to his race win tally have both ended in unforced errors, with his fall at Barcelona sitting alongside his 2018 fall at Sepang as silly errors from a rider not prone to them.

So what’s causing Rossi to fall more than ever? Arguably it’s in part a consequence of the times, with a young, hungry and insanely talented MotoGP field keen to up the limits at every turn – there’s a reason we’re still astounded when Marc Marquez can achieve over 60 degrees of lean without crashing, after all!

Add to that a bike that’s far from perfect – and requires its riders to push harder than ever on braking and corner entry – and you’ve got a recipe for disaster for the nine-time world champion.

A demon on the brakes anyway, it means that he’s skirting ever closer to the knife-edge these days – and conditions like Le Mans on Sunday just serve to make the whole situation even more treacherous for him.

However, it’s something that he’s going to have to address sooner rather than later considering he’s spending 2021 (and possibly 2022 as well) in the premier class.

Arguably 2020’s manic season was his best chance since 2015 of title success, and his old form would have undoubtedly have left him well clear by now had he maintained it.

But time and racing wait for no man and Sunday’s crash means he’s now completely out of the 2020 race.

A victory and three other podiums in 2021 make Jorge Martin's rookie MotoGP season one of the most impressive since Marc Marquez's. But is it the best?

Two-time MotoGP champion Casey Stoner is one of both the most vocal and best qualified to call for change in MotoGP. Simon Patterson assesses his wishlist

KTM has officially confirmed that it has poached Pramac Ducati’s Francesco Guidotti to serve as its new MotoGP team manager, after the sacking of Mike Leitner