Over the course of the history of the grand prix motorcycle racing world championship, there’s always been a category of racer that has particularly appealed to fans: the underdog journeyman racer.

They’re the riders out to make a career for themselves without the expectation of title success or factory wages.

And there’s perhaps no racer on the current grid that better personifies that than French Grand Prix winner Danilo Petrucci.

“It felt like no one trusted me” :: Danilo Petrucci

The Ducati rider showed once again just how good he is at his craft at Le Mans on Sunday by taking an outstanding race victory in wet conditions, never putting a foot wrong despite the advances of Jack Miller, Alex Rins and Alex Marquez.

And while he might be a factory racer this year, his career to the top of MotoGP has been far from traditional, highlighting just how hard he’s had to work to earn the privilege of sitting on Ducati’s factory bike and the opportunity to fight for victory.

One of the few MotoGP riders not to start out in the traditional route of 125 or Moto3 then a progression to 250 or Moto2, he instead came up the same route as fellow future MotoGP race winners Franco Morbidelli and Cal Crutchlow: production bike racing.

Runner-up in the Italian Yamaha R6 Cup in 2007, he moved from there to superstock racing, first on 600cc machinery and then in the European Superstock 1000 championship.

Finishing his final year there in second – on a factory-backed Ducati – he was able to leverage his success into a MotoGP ride with Ioda on its home-built CRT-spec bike.

From there, some impressive performances were enough to secure a seat at satellite Ducati squad Pramac, and he quickly rose up the Ducati ranks as his skills as a wet-weather racer and as a development rider and tester shone through.

When he was finally rewarded with a factory bike for 2019, some questioned whether it was the right move for the firm thanks to the lack of race wins on Petrucci’s CV.

He’s since rectified that statistic twice, first at Mugello last year in front of an enthused home crowd and again yesterday at Le Mans.

However, there’s still an argument to be made that perhaps he’s been promoted above his abilities into the factory team.

Seemingly happiest when he’s a satellite underdog, Petrucci hasn’t had an easy 2020 as tensions rose within the Ducati garage.

With the factory Ducati squad hindered more than any other team (including the satellite bikes of Jack Miller and Pecco Bagnaia) by the introduction of Michelin’s new gripper rear tyre, things have broken down dramatically between Ducati’s works riders and senior management, reportedly leaving the pit box a rather cool place. 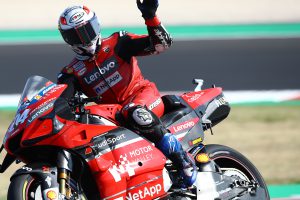 That’s a situation pretty much guaranteed to not get the best out of Petrucci.

A laid-back character who’s completely atypical to the usual gelled-up superstar racer, the 29-year-old is instead someone who once stated that the celebrity he’d most like to have dinner with is Homer Simpson!

The potential for discomfort was compounded by the news before the season even got underway that Petrucci would be replaced for 2021, with Ducati signing up his former Pramac team-mate Miller to supplant him before a wheel had even turned in anger.

Petrucci admitted yesterday that that hurt, and made the current year even more difficult despite him quickly signing up to ride for KTM in its satellite Tech3 team next year.

“The season hadn’t even started and I had already lost my seat,” Petrucci said.

“It felt like no one trusted me. In the end, everyone needs to make their moves but even though I understood that, it wasn’t nice to lose my seat before the season even began.

“It doesn’t give you the right motivation to race in the team for the year.

“I felt like I already wasn’t on the list at the end of last year – but thankfully other people trusted me.

“My story at Ducati is a long one, and I had to fight with a lot of big names to get my seat there. Maybe the people in the factory had other ideas, and I understood that.

“In the end it’s better like this and I’m happy to have won again and found my good feeling again.” 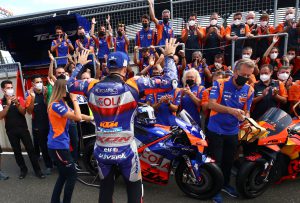 And the Tech3 move for 2021 will suit Petrucci far more than the corporate culture of the factory Ducati squad.

At its heart Tech3 is still a family-run team based in a small town in the south of France, and boss Herve Poncharal is exactly the sort of person who will be able to extract the best from Petrucci.

Because while yesterday’s victory doesn’t hide his journeyman status, it does show that Petrucci clearly has the skill to deserve a spot in MotoGP and the talent to win when things line up right for him.

His time as Ducati’s racing test rider at Pramac will also serve him well racing for KTM next year, with its young factory line-up of Miguel Oliveira and Brad Binder meaning it’s likely that Petrucci’s experience will be heavily relied on.

And while his tenure at Ducati might only be another five races long, Petrucci is also content that he can go out on a high by building on Sunday’s success.

Fast not only in wet conditions but also in the dry on Saturday, taking his best qualifying position of the year in third, he insisted after the race that he can maintain the breakthrough he’s made.

“The changes from the rear tyre hurt me a lot,” he explained.

“I started to work a lot on the electronics, but it wasn’t the way to fix things.

“We found something in the test at Misano, though, and Barcelona was the first time that the bike started to feel like I wanted it to again.

“I knew in Le Mans I had a big opportunity, and I took it.”