The news that Valentino Rossi has tested positive for COVID-19 and will miss the Aragon Grand Prix hit the MotoGP paddock like a bolt of lightning yesterday, with motorcycle racing’s most high-profile rider ever ruled out of this weekend’s race and probably next weekend’s too.

But it’s come as no surprise to many in the paddock that a major name has fallen ill and tested positive.

When MotoGP went racing again, series promoter Dorna implemented a rigid medical protocol that on paper limited not only the number of people in the paddock (initially excluding many staff) but also limited contact between personnel and riders from different teams.

It also put in place a rigorous PCR testing plan at considerable expense, with every person who wanted access to the paddock made to undergo a test within 48 hours prior to entry.

A dedicated smartphone app was launched to manage it, and this system has so far been successful in detecting and isolating somewhere in the region of 20 positive cases from the 18,000 tests so far logged to it.

However, while the testing procedure has been strictly enforced and is to be commended for its success, the handling of isolation, limiting contact and staying within small bubbles has made many feel that cases like Rossi’s were all but inevitable in the paddock – and could well mean there will be more to come. 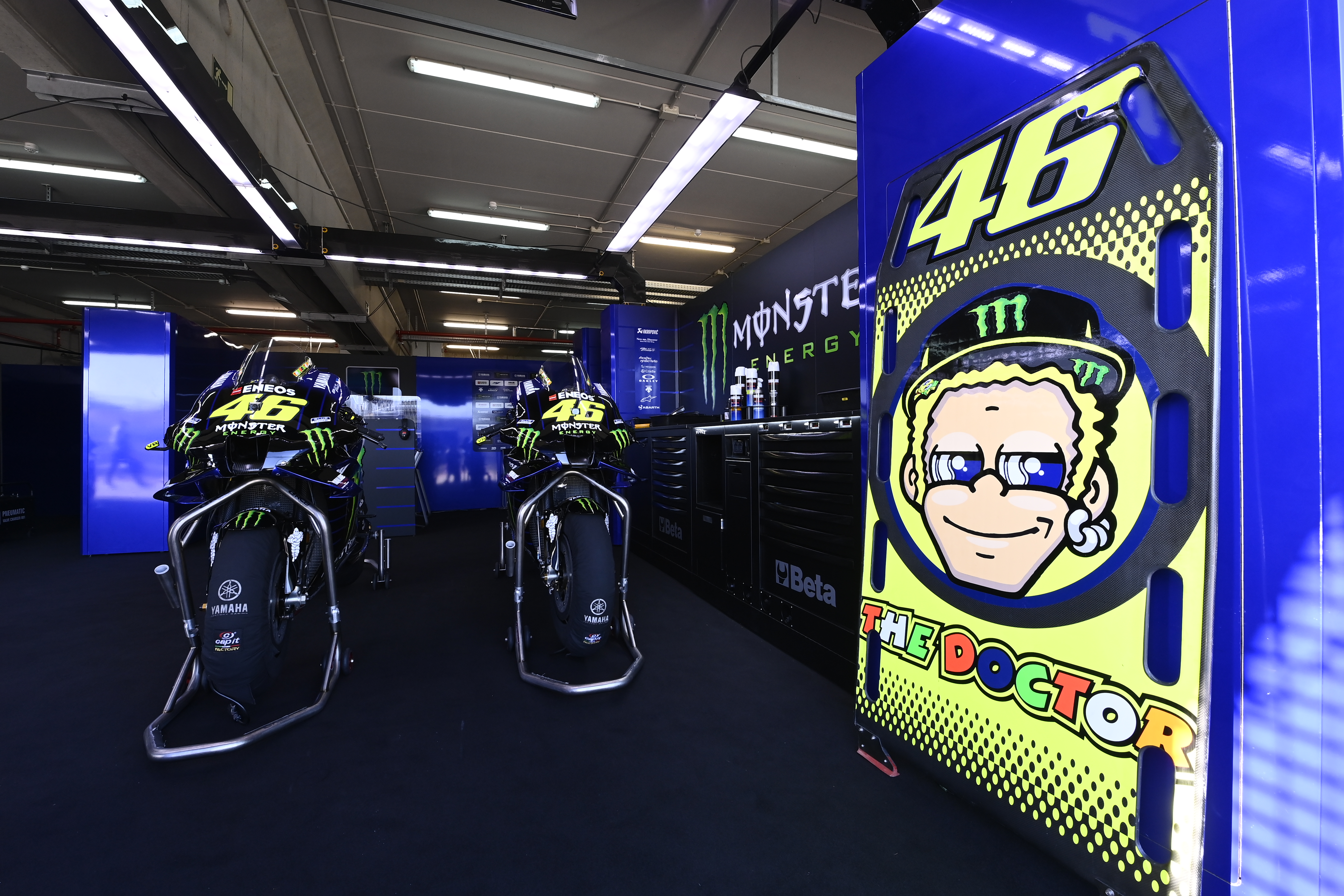 Lapses have been taking place since almost as soon as the season got back underway despite series organisers regularly warning teams of the precautions they must be taking.

Perhaps most risky of those breaches is the amount of people leaving the paddock between back-to-back rounds – something that the rules state should only take place under ‘justifiable’ circumstances but which has been happening since the opening round at Jerez.

Some riders have not remained in the paddock or in their hotels near the circuit between races, instead electing to jump on flights back home simply to avoid being cooped up in their motorhomes.

The Race asked a number of MotoGP riders on Friday about their approach to going home between back-to-back races, and while most have stressed that they’ve been isolating and limiting outside contact, very few have gone as far as to forgo returning home between consecutive-weekend events.

“Now with Valentino positive, it’s was a big shock for all the paddock, hopefully everything goes well and he can come back soon but in any case, everyone wants to go back [home between races] because it’s a tough time also, three races in a row, at least you want to spend some time with your friends or basically with your close family, and you have to evaluate if it makes sense or not, but this is a choice of everyone by themselves I think,” said Honda’s Stefan Bradl, and his sentiments were echoed by several of his fellow competitors.

While many MotoGP riders can afford to fly private, others aren’t so fortunate, like Moto3 title contender Tony Arbolino. The Italian travelled home between the French round and this weekend’s race – and is currently under isolation and set to miss this weekend’s race after someone else on his flight from Le Mans to home tested positive.

Rossi said he had tested negative for COVID-19 on Tuesday, but had another test performed on Thursday, which is when his case was diagnosed. He stated that he remained isolated at home since his arrival from Le Mans.

Though it is by no means clear when Rossi contracted COVID-19, it could be argued those joining him in a small private plane were under more risk than Arbolino, sitting two seats away from someone with the virus on a commercial airliner. 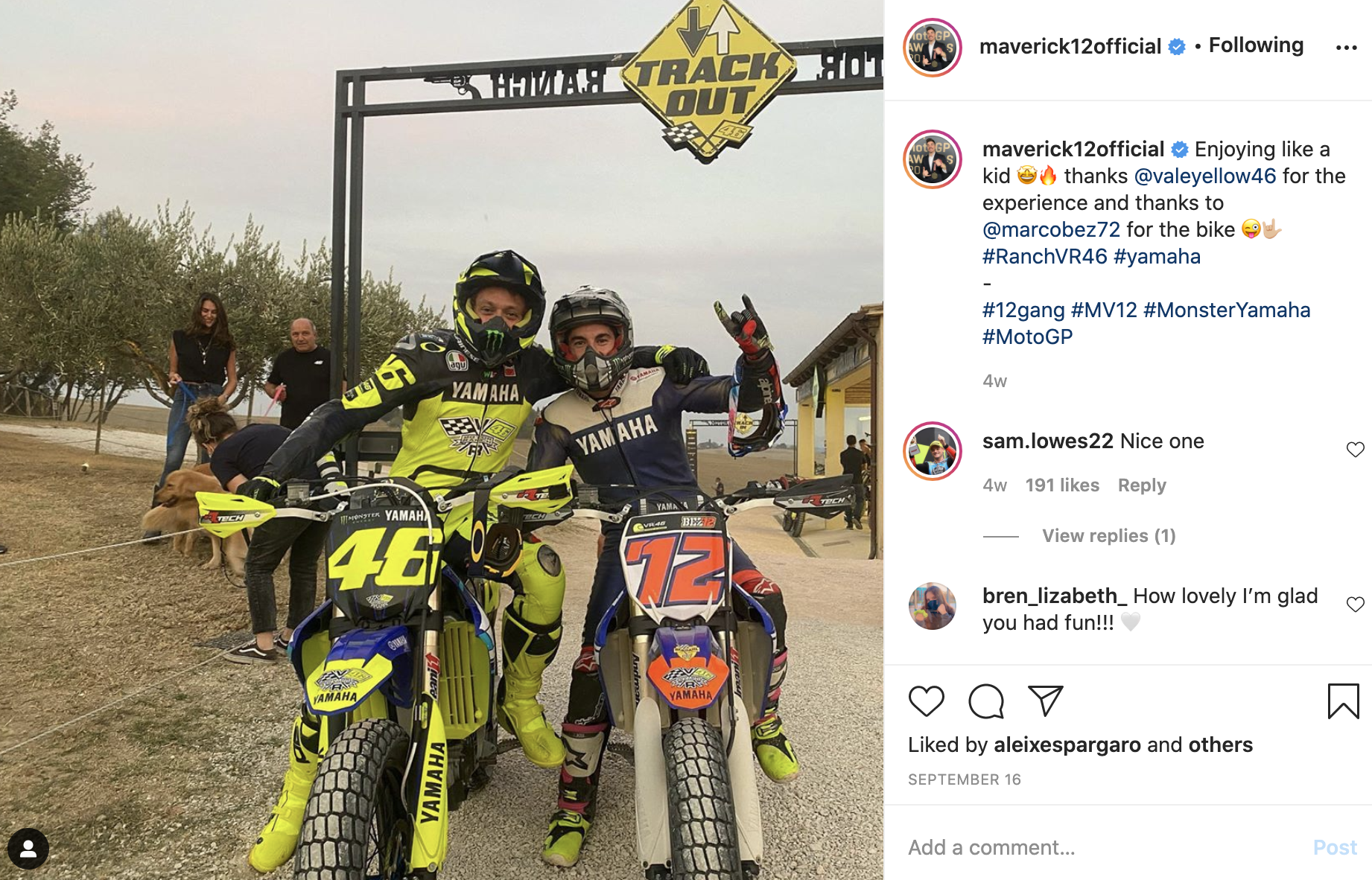 Even when riders have remained near the circuit, there have been plenty of well-publicised incidents that appear to breach the rules.

Between the two races at Misano, for example, Rossi hosted Yamaha team-mate Maverick Vinales at his VR46 Ranch near the Italian track.

With the news of Rossi’s positive test today, Vinales conceded that he would change how he spends his time away from the track from now on, when asked by The Race on his trip to Rossi’s Ranch.

“We have to pay a lot of attention,” he said. “Even if I have tried to pay attention when at the track or staying at home, we have to take less risk and see the least people we can. We need to pay maximum attention to the situation that is going on, because the COVID can take you out of two races and that’s a disaster.”

Initially, strict rules on working conditions within the paddock have also been become more relaxed.

From some teams’ hospitality units returning to their pre-COVID size and scale to an increasing number of guests being allowed to attend, it has increased significantly the number of people inside the bubble. There has also been an influx of guests and sponsors attending races.

Even this morning, with the paddock still reeling from the news that Rossi will sit out this weekend’s action, the delayed start to first practice due to cold track conditions was filled with shots of riders mingling together in pitlane, and in many cases they were without masks or other PPE.

That approach was perhaps best emphasised today by Ducati rider Andrea Dovizioso, who was one of the first riders to begin travelling home between back-to-back rounds at Jerez. He told journalists that he believes that given the unpredictability of the COVID situation, he feels the situation is partly out of his hands. 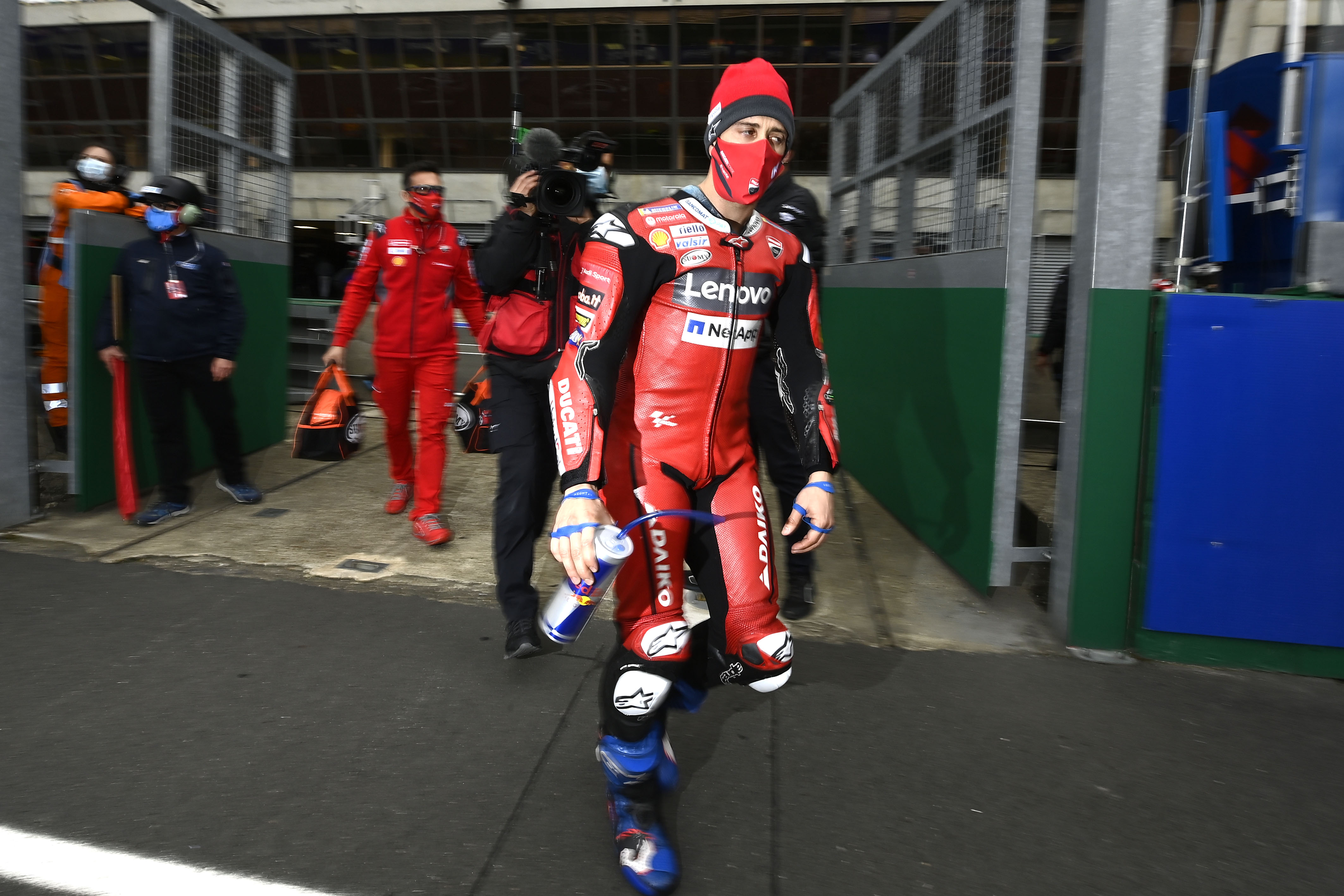 “I think the situation is difficult for everybody, and there are some people who are more careful, some people less, but in my opinion it’s good to be worried and try to do the maximum but at the end I think nobody has the situation under control, nobody has a clear situation,” Dovizioso said.

“So I try to live in a relaxed way about that, because I don’t think we have all that power to control it. I don’t want to say you have to live in a normal way, but it’s very difficult – when you’re travelling, when you work with a lot of people, you don’t have the control of the other people.

“At the end everybody is trying to follow the rules, and this is good, but at the end in my opinion it’s very very difficult, almost impossible, to control it, so I’m a bit more relaxed than a lot of people because unfortunately we don’t have the situation under control.”

His Ducati 2021 replacement Bagnaia professed a similar outlook at the situation, citing Arbolino’s case as an example of how big of a role sheer luck played in being unaffected by COVID.

Likewise, KTM rider Pol Espargaro said: “When I go back home, I stay with my wife and my daughter. If my wife gets COVID going shopping or something, you cannot do anything. We are cleaning the hands 30 times per day, using the FFP2 mask to not take the COVID, but sometimes it’s impossible.

“Trust me, in my case, I’m really trying everything to not take it but as I said we are not living alone and the people who are surrounding us, they can take it and they can pass to you, so it’s sometimes inevitable.”

While the MotoGP testing procedure has been maintained better than other parts of the protocol, there are question marks about the speed with which people in close contact with infected individuals have been allowed to retest and return to the paddock.

Government instructions in most European countries are that anyone in close contact with an infected person should isolate for a period of time (normally ten days or two weeks) regardless of the result of subsequent testing, as the virus takes time to grow in the body after contact.

However, MotoGP has been happy to test people in close contact immediately and allow them back into the paddock straight after a negative test.

“Basically, we are requested to be inside the bubble, so as maximum as possible we need to spend time with our group, let’s say, with our bubble,” said Tech3 KTM rider Miguel Oliveira. “If for any reason we escape the bubble, we need to come here with the test. We need to test by ourselves. 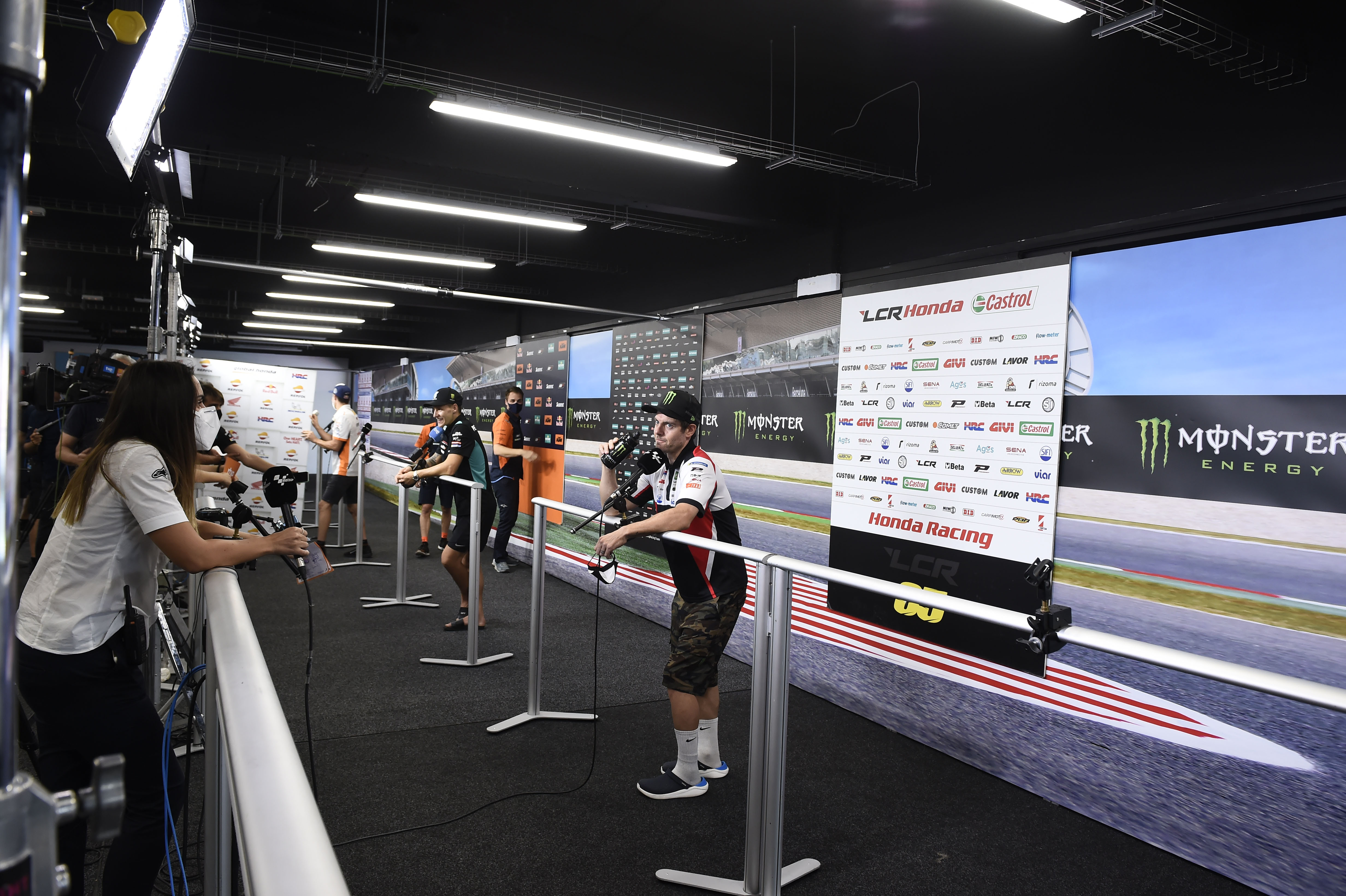 “As you know, Dorna has the testing team here for the nasal swabs, so they do that, but if for any reason we go out of the bubble we must be tested again. Which, from Le Mans to here, was mandatory because we needed to travel anyway. When we stay in one place we try at the maximum to be here but when we have different countries and we need to travel, we need to travel.

“Anyway, the bubble situation it’s very very strict, but at the same time hard to follow 100%. With the cases going higher and higher, it will be a matter of luck to get the virus or not – we must anyway do the best we can, follow the protocols, wear the masks and hope for the best but it’s a great shame, we need just to survive until the end of November to be able to race.”

MotoGP has allowed those producing a negative test back into the paddock immediately afterwards.

“We are following all the rules of the countries in which we are having events,” he told MotoGP.com.

“We are trying to do the best for the safety of everyone inside the paddock, to prevent any possible kind of infection.”

But given everything that has been occurring, it’s no surprise at all that someone in the premier class has fallen victim to coronavirus.

And it’s typical that of all 22 riders on the MotoGP grid, it would be the biggest name in Rossi who would be the first to have his championship impacted.