What went on in first MotoGP practice at Le Mans

> Espargaro a tenth up on Rins

Espargaro moved up to first place with a minute left on the clock, going a tenth clear of Suzuki’s Alex Rins – who had logged his best time just moments earlier – with a 1m31.771s. 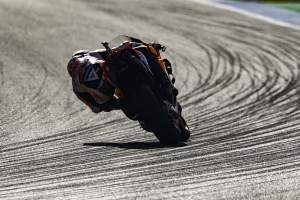 The Honda man’s position at Honda beyond 2022 has been made precarious by none other than Suzuki, with FP1 marking the first MotoGP session since news came out that the Hamamatsu manufacturer was looking to leave MotoGP – effectively making its two riders Rins and Joan Mir (sixth in FP1) free agents and contenders to replace Espargaro.

Aleix Espargaro moved up at the chequered flag to finish as the lead Aprilia, ahead of Mir, Ducati’s Jack Miller – who had led the vast majority of the session – and the second Aprilia of Maverick Vinales.

As many as 19 riders slotted in within a second of the younger Espargaro’s session-topping time.

There was a considerable amount of crashes during the session, and most of them came from riders on KTM RC16s.

The South African is the first to fall victim to Turn 3 this weekend 👀#FrenchGP 🇫🇷 pic.twitter.com/TgXjCjyUES

Tech3 KTM rookie Raul Fernandez – returning after two races on the sidelines – and factory man Brad Binder had a fall each, while Binder’s team-mate Miguel Oliveira was on the ground twice – first at Chemin aux Boeufs and then in a bigger crash at La Chapelle.

Miguel was up and OK after the crash! 👍#FrenchGP 🇫🇷 pic.twitter.com/d6Hfsm8Rfw

There was also an early Garage Vert crash for Gresini Ducati’s Enea Bastianini and a Garage Bleu tumble for Yamaha’s Franco Morbidelli.

Finally, Marc Marquez came very close to dropping off his Honda when hopping off the outside kerb at Garage Vert, but, remarkably, held on.