Aug 23 2020
By Valentin Khorounzhiy
No Comments

Maverick Vinales has described the cause of his terrifying incident in MotoGP’s Styrian Grand Prix as a brake “explosion”.

He was forced to jump off his Yamaha at speed and said it capped off the worst two-race stretch of his MotoGP career.

“I understood very well that the brake was broken or something, so I decided to jump” :: Maverick Vinales

Vinales was running 13th, having already slumped from an initial sixth due to recurring brake issues, when his front brake gave out completely on approach to the fast Turn 1 right-hander.

Realising he wouldn’t slow down nearly enough from the 185mph entry speed, he hopped off the bike – which stayed upright as it went into the air fence at speed.

The air fence was demolished and Vinales’ Yamaha was left a smouldering wreck, but the rider himself was unhurt.

He revealed he initially started to lose braking power around “lap three or four”, but added that the issue was intermittent.

“I started to lose the front pressure of the brake. I was trying trying, I went out [of the track] one time,” Vinales said.

“We have to forget these two races in Austria, for sure it’s the worst two races I’ve been in in MotoGP” :: Maverick Vinales

“Then [Fabio] Quartararo, Valentino [Rossi] and [Danilo] Petrucci overtook me.

“Suddenly the brake was good, so I could make 1m24s mediums, I was recovering a lot to Valentino and Fabio, and then suddenly in corner one the brake exploded, so it wasn’t possible to do nothing.”

Asked by The Race whether fellow Yamaha rider Quartararo’s brake issues in the previous race had given him cause for concern going into the Styrian GP, Vinales said: “It’s something I never had during all my MotoGP career. Maybe the brake would go down a little bit, I’d play with the lever, but today every lap I was adjusting the lever corner by corner, I could not make anything.

“I think the part went away, on the brake. I remained without brakes – the first intention was to go out of the bike, because I couldn’t stop the bike, impossible.” 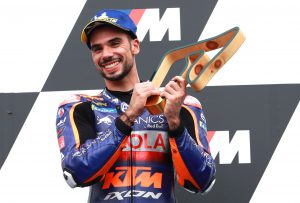 The previous MotoGP race, the Austrian GP, featured Vinales and team-mate Valentino Rossi’s near-misses with the flying bikes of Johann Zarco and Franco Morbidelli, while Vinales’ race was then completely undone by a slipping clutch.

Asked how he came to the thought of jumping off the bike, he said: “But what can you do? I would not remain on the bike, I jumped.

“I understood very well that the brake was broken or something, so I decided to jump.

“Nothing more, we lose and we win together. We’re going to try to come back stronger – now we have to forget these two races in Austria, for sure it’s the worst two races I’ve been in in MotoGP.

“We deserve something better, we worked really hard all weekend.”