The final corner of the Red Bull Ring once again delivered a spectacular finish in today’s Styrian Grand Prix, with Miguel Oliveira heading into the turn third and emerging from it as MotoGP’s latest first time winner.

And while it was Jack Miller and Pol Espargaro who lost out on victory in the shuffle, it was fourth-placed finishers Suzuki and Joan Mir that appeared most enraged by it.

Oliveira’s fantastic victory earned him the bonus prize of a brand new BMW M4 as this was the 900th race in grand prix motorcycle racing’s premier class.

“The next thing I heard was ‘neeuuuuunnnngggg’ as Miguel came though!” :: Jack Miller

His tactical move was only the latest in a series of stunning finishes at the Red Bull Ring since MotoGP returned in 2016.

Andrea Dovizioso was the first to set up victory there over Marc Marquez in 2017, with Marquez making a last lap lunge but his Ducati rival able to fend him off and hold his line for the win.

Marquez similarly lost out in 2018, this time to the Ducati of Jorge Lorenzo, while history repeated itself in 2019 with Dovizioso extending Ducati’s clean sweep of victories at the Red Bull Ring in another last-gasp defeat of Marquez (pictured below).

It was a similar late lunge for the win from a Ducati rider that handed Oliveira the victory today too, with Miller committing to a do-or-die attack on Espargaro – but making the crucial mistake of not checking behind him before committing.

“Miguel caught me by surprise, that’s for sure!” Miller admitted.

“I thought the battle was between Pol and myself, so I fired one at him up the inside.

“I must have gone into Turn 6 hot because it’s the first time all weekend on the run up that I’ve hit the rev limiter in sixth gear!

“I’m really angry about the decision because it’s not fair” :: Joan Mir

“We came down the hill and all I was thinking was ‘don’t go on the green’ [off-track markings] – and then the next thing I heard was ‘neeuuuuunnnngggg’ as Miguel came though!

“Being so used to Moto3 I was waiting for about six of them to come through on me and to end up off the box!”

Oliveira conceded that this was a case largely of being in the right place at the right time.

Only able to make it into the leading group after the second red flag in as many weeks caused the race to be stopped and allowed him to change tyres for a softer option, he admitted he had nothing for the pair ahead until they made their error. 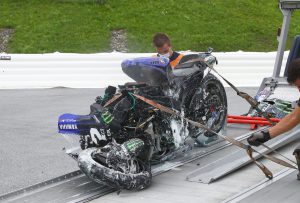 “I don’t think you can really predict anything in a 12-lap race,” said Oliveira.

“I just knew that I didn’t have to do anything with tyre management or fuel consumption, which makes it an easier race.

“Pol and Jack were really strong, and I didn’t think I could have cleanly overtaken them.

“I saw Jack trying to close the gap and knew he would try to go for the win in the last corners.

“I saw this happening and I played it a little bit safe and smart to just be on the inside line and cross the finish line first.”

Not everyone was delighted with the race result afterwards, though, with fourth-placed rider Mir and his Suzuki team immediately going on the offensive against Espargaro – who hadn’t been as careful as Miller when it came to not exceeding track limits.

Running wide but able to correct his line on the asphalt run-off, Mir was adamant that KTM rider Espargaro should have been docked one place the same way Jorge Martin had been only hours earlier in the Moto2 race, costing him the win.

“I’m really angry about the decision because it’s not fair,” said Mir.

“Martin didn’t win his race because he went on the green and he didn’t gain anything.

“I understand that if another rider is in front and you touch him and kick him out of the track there is no penalty – I’m in agreement with that.

“But in this case it wasn’t like that – if you check the last two corners Pol took the inside line then went wide, and Jack took the position from him.

“But then Pol continued on the outside, and of course he went wide – because if you go wide in that corner with that speed you have to. When he touched the green he opened the gas full.”

Mir’s team boss Davide Brivio was even more vocal in his criticism of the stewards’ decision, going as far as to intimate that the fact the race was taking place at the home of both KTM and its title backer Red Bull played a part in the outcome.

“I can’t understand what the race direction is up to,” he told Italian website GPone, “because they have already been in the eye of the storm for a few days.

“There is a regulation that is very clear, which says that if a rider exits in the last lap off the track he is penalised, one position is taken away.

“It happened in Moto3, it happened in Moto2. Who knows why today, just today that we are in Austria at Red Bull’s home, there is a KTM that has gone over the limit and… I don’t know, I’m in a bit of difficulty in reaching a conclusion.

“Unjustly we didn’t get on the podium, because if there are rules, they have to be applied.”

Mir also received sympathy after the race from someone well versed in last lap battles at the Red Bull Ring: Dovizioso.

A firm believer that the rules on exceeding track limits need to be even tighter and a vocal critic of them this weekend, he also acknowledged that for now you have to work with the rules as they are.

“I’ve already pushed a lot and spoken a lot in the safety commission to change the rules about this.

“Miller pushed Pol out, but in the end the way the rules are managed it’s still strange because for me you have to imagine that where there is green paint there is gravel.

“But we have to race with the rules that we have, and I don’t want to say too much about this manoeuvre but I will say after my experiences with Marc that some riders are always pushing 100% in the battles and they are thinking about the best manoeuvres they can do.

“If you check my battles with Marc I didn’t brake late and close like Pol, but I was trying to keep to the outside – because when you’re outside, downhill, you can’t control anything, the rider on the inside controls everything.

“It isn’t intelligent, because if the rider inside can control it it is OK, but if the rider makes a mistake you get caught too.”

The FIM Stewards Panel has a policy of not commenting to the media on the decisions it reaches.