May 13 2021
By Valentin Khorounzhiy
No Comments

Is Francesco Bagnaia’s current MotoGP points lead particularly meaningful? From one angle, no, not really – a two-point gap out front after four races is unlikely to make the 24-year-old Italian anyone’s favourite for the 2021 crown.

And yet, as we’ve outlined recently, being a MotoGP points leader is something of an exclusive club in itself, and Bagnaia has put together a really impressive start to his season to top the points standings.

Last year, he should’ve been a race winner already but fell in the closing stages of a dominant Misano performance – but for a rider who’s looked so streaky for much of his MotoGP career, having the points lead after four races is a stronger case for ‘elite’ status than a solitary race win would’ve been.

And if we do consider Bagnaia top-tier in this very moment, then the history books should take note. He was, after all, one of four riders to enter the premier class in 2019, and all four have already done more in MotoGP than the vast majority of the riders in the category’s history.

Beyond Bagnaia, the other three are already race winners. Two of them are multiple race winners at that, and the one with just one race win to his name is actually the reigning champion. 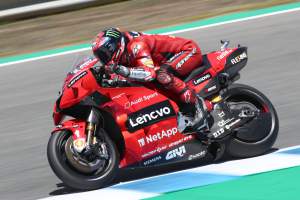 It makes for a remarkable success rate for a rookie class, one arguably not seen before in modern MotoGP.

When the quartet stepped up, Bagnaia looked arguably the surest thing among them, and played the part in pre-season testing. He’d been signed directly by Ducati, on a two-year MotoGP deal that guaranteed a works bike for 2020, even before he’d embarked on the Moto2 title campaign that would make him world champion in 2018.

That title made him the cream of the crop. His closest – really, only – championship rival Miguel Oliveira was stepping up too thanks to KTM now having a satellite team in Tech3, but Oliveira’s route through grand prix racing was longer and lacked a title.

The Portuguese rider had made his world championship debut when the lightweight class was still 125cc (in 2011, pictured above), and prior to a nine-point defeat to Bagnaia in 2018, had been just short of overcoming a 90-point deficit to beat Danny Kent in the 2015 Moto3 title race. A good rider, but perhaps something of a nearly man.

Joan Mir, also stepping up in 2019, raised some eyebrows by pushing for a MotoGP move while in his rookie Moto2 season, and Suzuki raised them further by offering him a factory ride. Mir’s Moto3 title had been super impressive, but he left Moto2 without ever standing on the top step. 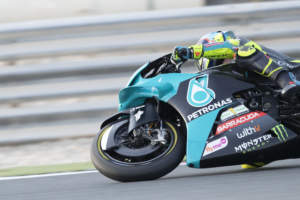 And, last and at that point least, Petronas SRT Yamaha was taking a punt on ex-wonderkid Fabio Quartararo, whose timely first (and only) win in Moto2 came after a thoroughly frustrating couple of years that suggested he would never live up to his early-career promise. Even now, with everything we know, the Petronas team still readily admits that Quartararo was a “mediocre” Moto2 rider who probably wouldn’t have got his chance if Dani Pedrosa had fancied riding a satellite M1.

So, Bagnaia had the strongest MotoGP case of the four. And yet his pretty solid pre-season was parlayed into a rough rookie campaign, while his peers climbed above him in the ranks.

Quartararo was the first to break out, dazzling the MotoGP world with his unexpected mastery of the nimble Yamaha M1 and right now he’s still the 2021 title favourite. Oliveira is responsible for two of KTM’s three MotoGP wins, underlining his credentials with what was an absolute beatdown of the competition on his home turf in Portugal last year. And Mir, having improved so much from an injury-ravaged rookie season, is already a MotoGP champion.

But now Bagnaia leads all of them in the championship, and everyone else too, so for this moment at least we’ve come full circle. Whatever comes from here, arguably these guys have all made it.

With the tantalising likes of Raul Fernandez and Pedro Acosta on the horizon, many in MotoGP are already anticipating the future – but only because the future represented by the 2019 quartet is already here, perhaps sooner than expected. Even Marc Marquez, only 28, has acknowledged that in his absence there has been something of a generational change – and while it’s not exclusively made up of Bagnaia, Mir, Quartararo and Oliveira, all four are definitely a part of it.

And it begs the question – has there ever been a MotoGP-era rookie class this packed with talent and historical significance? And if not, why not?

In order to get a better idea, I’ve gone through the career statistics of every rookie class since the change from 500cc to MotoGP in 2001, and selected the five standout intakes.

I’ve had to use my discretion in selecting who counted as part of which rookie class, because many MotoGP riders make their debuts as replacement riders or wildcards and only then go on to be full-timers. For example, Iker Lecuona contested his first race in 2018, in place of the injured Oliveira, but for me he was very obviously a 2019 rookie. A rookie season, after all, is when you can conceivably be referred to as a full-timer.

In all but six years, MotoGP had a future race winner among its rookie full-timers. And every rookie class bar the Sylvain Guintoli-only 2007 and the Tito Rabat-only 2016 accounted for at least one future podium finish.

However, for the purposes of this list strength in depth is almost more important than individual successes. One future Hall of Famer does not automatically make a good NBA (basketball) or NHL (hockey) draft, after all.

…but that doesn’t mean I can rightfully omit the Marquez year, even though the presence of CRT newcomers who never made it further than that is pretty overwhelming.

Staring, Corti, Silva, Pesek and Laverty account for 40 points in 117 starts. To put it mildly, that ain’t a lot. That doesn’t make them bad riders necessarily, but it means they haven’t really had much of an impact on MotoGP.

Beyond them, and beyond the generational talent who headlined this crop and would’ve headlined any other, there were two pretty good additions.

Apr 08 : Iannone's drugs ban: The fall of The Maniac

One was Andrea Iannone, whose star burned very brightly but very shortly, and the other was Bradley Smith, who was more of a simmering medium-heat presence. Iannone is banned now, so that chapter is probably closed for good, but 30-year-old Smith may yet add to his MotoGP legacy.

Given that this intake was right in the middle of the Rossi era that would seamlessly transition into the Rossi/Lorenzo/Stoner era a few years later, it is pretty impressive that 2003 managed to fit in four future race winners as rookies.

Adding to the fun is that, apart from the future Honda factory champion Nicky Hayden, the other three winners would become that either as satellite riders (Marco Melandri at Gresini Honda, Makoto Tamada at Pons Honda) or as a wildcard entry (Troy Bayliss, who was a 34-year-old MotoGP rookie in 2003).

It could’ve very easily been five race winners, too, but Colin Edwards never did stand on the top step across his 12 podium appearances.

But though this ranks ahead of the Marquez class overall, none of these riders – not even Hayden, despite his 2006 fairytale title and many subsequent career highlights – became long-lasting MotoGP superstars.

And so Marquez’s star power means this is probably the most tenuous spot on the list, and it may be phased out in the very near future by either the 2015 Jack Miller/Maverick Vinales class or the 2017 Alex Rins/Johann Zarco one, should any of them win a championship.

Lorenzo and Dovizioso need no further introduction, although both could’ve probably padded their stats even more – the moody Honda RC213-V drove Lorenzo to what was an earlier retirement than it could’ve been, and Dovizioso took nearly a decade to break out as a MotoGP star.

There was a lot to like about the other two rookies, too – Alex de Angelis was third behind Lorenzo and Dovizioso in the two 250cc title races, and James Toseland was already a two-time World Superbike champion. But injuries took their toll on Toseland, and de Angelis – though a one-time MotoGP podium finisher – became the MotoGP equivalent of a ‘yo-yo club’ from football, going back and forth between the premier and the intermediate class.

There’s a big caveat to the success of the 2019 crop, and that is that only one of their combined race wins so far came in the presence of a fit Marquez – and that win was the Jerez opener last year, which was when Marquez made himself unfit.

There’s another big caveat, too – most of MotoGP’s history is that of fairly lopsided grids, compared to the current era’s utopia. In a championship where it’s not the podium but the top 10 or top 15 that is split by 15 seconds, it’s possible to win with more teams so more riders are likely to share success.

Still, this is a brilliant crop. Mir is a champion already, aged just 23, and the other trio look like they absolutely could join him down the line – Quartararo in particular.

Whichever way you slice it, the above caveats aren’t enough to rank 2019 above 2006 just yet. Like ‘19, this was a year that added four future podium finishers and three future race winners into the mix, and it’s the one with the strongest median level of achievement.

Stoner has fewer titles than his fellow MotoGP titans, but is regarded as being every bit as capable, having achieved a pretty phenomenal strike rate before his early retirement. And Pedrosa is almost certainly the greatest MotoGP-era rider not to win a title.

Add to that Suzuki wet-weather standout Vermeulen, a winner in 2007 (pictured below), and the long-serving de Puniet, and it amounts to a transformative roster of newcomers.

But 2019 will probably have it beat in not too long. For Bagnaia, there’s a first win seemingly just around the corner, and the others will surely stand on the top step again, too. They are a great group – and they’ve also been fortunate to debut in MotoGP at a great time

The flipside of that is that these early successes probably don’t guarantee the quartet – or, more appropriately, the trio, as Mir’s champion status has bought him a lot of credit – the same MotoGP career longevity that they would’ve enjoyed if they had arrived two decades prior and were still as successful out of the block.

Even if they stay healthy, not only are the likes of Fernandez, Acosta, Marco Bezzecchi, Aron Canet, Remy Gardner and more moving up the ranks, but Quartararo’s example may well encourage MotoGP teams and marques to look for hidden gems, too.

For Bagnaia, Quartararo and Oliveira, it is therefore wise to make hay while the sun shines – and, for the most part, they have been doing just that.