The 35-year-old, who is having a MotoGP sabbatical this year after walking away from the factory Ducati team, has been testing with Aprilia at the Italian GP circuit Mugello yesterday and today. 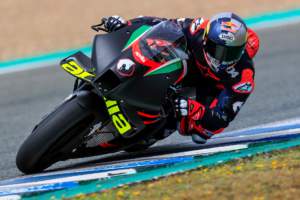 What we learned from Dovizioso’s ’emotional’ Aprilia debut
Read more

It marks his second test on the RS-GP, after Dovizioso completed a three-day test at Jerez last month (below). But he was tight-lipped in the aftermath of that experience, explaining that he was not yet comfortable enough on the bike to properly judge its strengths and weaknesses and how competitive he could be with it.

And while the Mugello test was supposed to provide some clarity, it has not, as Dovizioso has been unable to fit in any meaningful dry running.

“Unfortunately the weather was really bad, we couldn’t ride on the track – we did two exits yesterday that there were some drops [on the track], and it was enough to try a different [seating] position, that was very important, but I couldn’t push,” he said.

“So, unfortunately I can’t say too much, about the [bike in the] dry.

“We had a chance to ride a bit on the wet yesterday but there was a lot of water and today the condition was a bit more normal for the wet and we did a lot of exits because we wanted to use the time we had.

“Happy about that, the feeling was good, but I can’t say too much unfortunately.”

Dovizioso said he and Aprilia were “very unlucky”, and that he felt he wasn’t able to provide the feedback that he hoped to give to the manufacturer.

That feeling on a #MotoGP bike..😎👍
Thanks to @ApriliaOfficial !

“I have some ideas but normally I’m quite calm [careful] to say something because you have to push and be fast to understand all the details,” he explained. “You can have immediately some feeling but it’s important to understand the feeling when you are pushing. And still I couldn’t have that condition.

“I think two days in Mugello, it was good if we [would have] had the chance to ride on dry, because the layout of the track is interesting and it was the second test, it’s important so I could understand a bit more the bike, but we didn’t have any chance to do that.”

Asked therefore whether he needed another test with the RS-GP, Dovizioso said: “Minimum. Because it was important to change the track, you can understand in a better way everything.”

Dovizioso did point out that the second test marked the end of his original “plan” with Aprilia, but sounded very open to discussing further tests.

However, he stressed there was “no reason” yet to speak about a potential race outing, and likewise insisted it wasn’t the time to – at least publicly – explore prospects of a hoped-for return to the grid for 2022.

“I’m living my life in this moment, day by day, because I don’t have any stress about that,” he said. “If there will be a good situation for me [in MotoGP], I will take it.”