The MotoGP rider facing an Aragon GP moment of truth

Marc Marquez is four points away from being mathematically eliminated from the 2021 MotoGP title fight. It’s a total formality, of course, but it’s indicative of the tone of his season, in which specific results have clearly mattered much less than getting in shape for 2022.

However, there’s still bound to be some serious expectation heading into Aragon this weekend. Marquez’s record at the left-hander-dominated (10 left turns versus 7 right turns, per MotoGP’s official designations) Honda-favouring Alcaniz-based track is not quite at the level of his Austin and Sachsenring reigns, but it is formidable all the same. On his last appearance there in 2019, he led every lap en route to a thoroughly comfortable win.

But win or crash (and those are the two likeliest outcomes), it won’t make a huge difference to Marquez’s 2022. For this Marquez, anyway.

For the other Marquez, Marc’s brother Alex, the visit to Aragon should be a big deal, coming amid a first season at LCR in which he’s just now started to get out of the woods.

Much has been made of the 2021 Honda package not being up to scratch, and the combined evidence of Pol Espargaro struggling overall with the switch from RC16, Marc Marquez finding moments of magic hard to come by – or at least harder than you’d expect – and Takaaki Nakagami not reaching the same heights as last year make a compelling case.

In that context, Alex Marquez producing a largely similar level of results compared to his rookie season in 2020 is acceptable enough. Despite the move from a factory team ride to a factory-supported ride, the baseline pace seems mostly improved, albeit offset by an increased rate of incidents.

But is par for the course enough in the modern world of MotoGP? Former Moto2 title rival Brad Binder debuted in MotoGP the same year, and already has two wins to his name. Jorge Martin has just eight races under his belt, and may have already established himself as a regular frontrunner.

As troubled as Honda’s campaign is, he’s still on average the fourth-fastest among the RC213V riders, and he’s been crashing too much – compared to a rookie season that was genuinely excellent in terms of staying on the bike. 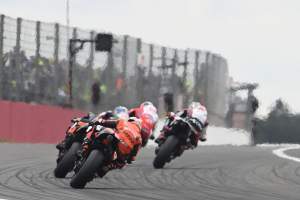 In fact, there are those who might question whether there’s really been improvement shown by Alex Marquez in 2021, given that he was on 67 points after 12 races last year compared to 49 now. But to do that would be to ignore two outliers.

The first outlier is the 2020 Le Mans race being a full-on wet grand prix, which yielded the younger Marquez’s first MotoGP podium. That’s not to say it’s not a worthwhile achievement, just that it’s a different set of skills and less representative of baseline pace in the more normal, dry conditions.

The second outlier is Aragon. By the 12-race mark in 2020, MotoGP had already raced at the Alcaniz venue twice. And in absence of his usually dominant older brother, Alex Marquez continued what is now a family tradition of Aragon star turns.

In the first Aragon race of the 2020 double-header, Alex Marquez was three tenths away from beating former Moto3 team-mate and title rival Alex Rins to the win. In the second, he crashed out while running fourth. Those are by no means unprecedented results for a rookie, but in Marquez’s overall 2020 those two weekends look like they belong to an entirely different campaign by an entirely different rider on an entirely different bike.

* Gap to fastest lap in qualifying across Q1 and Q2

To account for Alex Marquez’s second-race performance before the crash, bringing up his gap to the leader after 10 laps in every race reveals that the only race where he was closer to the front at that point than in Aragon II was Aragon I. 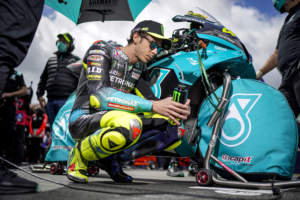 There is no obvious suggestion from his junior record that the younger Marquez would find Aragon on a premier-class bike so much to his liking, but clearly he did. And though the Honda RC213V clearly fancies Aragon, it had other strong circuits on the 2020 calendar – but while Nakagami nearly won at the Red Bull Ring and was in the podium hunt at Valencia, Alex Marquez had a pretty poor time at both.

If whatever underlying factor that enabled his Aragon outlier of 2020 is still an influence, then obviously the younger Marquez will be at least above-average once again. What is important, too, is that he’s seemingly starting to find a semblance of form just in time for the Aragon visit, having scored three consecutive top-10s.

“We came from three GPs, two in Austria and one here [at Silverstone] after the summer break that looks like we did a step forward,” he said at the British Grand Prix.

“We changed something on the bike, it looks like the improvements are small but are there. With the category like it is now, everything’s so close, you need to be always in that tenth that gives to you a big improvement, a big change.

“It looks like we’re in a good shape. The most important thing for Silverstone was to make a good result, to finish with a good performance, a good feeling, to come to Aragon with 100% confidence on the bike. This I did, and I’m happy for that.

“Last year there [at Aragon] was really good, both GPs, but this year a lot can change. The other manufacturers improved a lot. So we need to be really calm, normal expectations, not to wait to arrive there and win the race.

“We need to be calm, make the work, the proper work during all the weekend, and then Saturday we’ll see where we are.

“But yeah, I’m really motivated to be there, it’s one track that I like a lot, and I hope that this year also there the machine will work good.”

Good news is, as far as “win the race” expectations are concerned, that’ll mostly be directed at the other Marquez. But however Marc performs this weekend, he’s a Honda rider through 2024.

Alex’s deal is through to the end of 2022, but he’ll need to start making the case for a new one before this year is out. And Aragon looks like it should be a massive opportunity – perhaps even a make-or-break one.