'Magic again' or still limited? - How Marquez's recovery is going - The Race
Skip to content
MotoGP

‘Magic again’ or still limited? – How Marquez’s recovery is going

Six-time MotoGP world champion Marc Marquez is downplaying his chances of taking a second victory of the 2021 season ahead of this weekend’s Aragon Grand Prix, despite many of his rivals tipping the factory Honda rider as the man to beat at one of his favourite stomping grounds.

Marquez has an impressive win rate at the Motorland Aragon circuit, taking victory there five times from seven races in the premier class, dominating from 2016 until 2019 by winning every year. 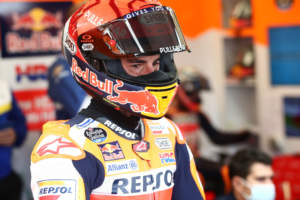 Marquez is a fan of counterclockwise circuits and already a winner at one of MotoGP’s few left-hand tracks earlier this year when he took his first victory since a badly broken arm and subsequent botched return to racing.

But despite the high expectations, Marquez is taking this weekend as it comes.

“I know that in FP1, I’ll feel very good,” he admitted. “But it’s something that over the weekend we’ll have to understand. It’s true that it’s a circuit that I like, a layout that I like, and left corners that stress less the right arm. But we’ll see because sometimes the position in the left corners isn’t completely natural. But I just want to ride the bike and not think a lot about the bike and the injury.”

Marquez is not only working to recover from the broken humerus bone he suffered in the Jerez fall 14 months ago but the stresses being put onto his already damaged shoulder joint by the muscle degradation that came about from months of not being able to fully train with his right arm.

It’s seen Marquez make significant changes to the bike in recent months, including a return to using a scooter lever on his left handlebar to control his rear brake – but he said that the bike changes are simply a sticking plaster to the real issues he’s facing.

“It’s true that this year I’m struggling in many areas,” he admitted. “Some of these areas are the same areas as where we struggled in the past, but some are new. Some are places where we could manage in the past by adapting. I try in my mind, it’s something that I want to do, but I can’t at the moment. So then I try to adapt the bike in different ways to absorb or lose less time at those specific points. 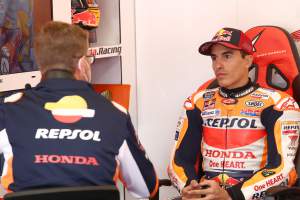 ‘I expect much better’ – Marquez on his frustrating recovery
Read more

“The scooter rear brake is something that I already tried in the past, but I felt like it wasn’t a big improvement, but now I’ve tried it again with some modifications. If you’re struggling in some areas and you want to find something extra, then sometimes it works and sometimes it doesn’t.”

One place where he can make up the difference, though, is in the opening laps with his aggressiveness when the lights go out. A strategy that bit him last time out at Silverstone when he collided with Ducati rider Jorge Martin and caused both of them to crash, he also conceded that it’s not the way he necessarily wants to race, but that it’s the way right now he’s forced to.

“Normally in the first laps I try to find a good position,” explained the 28-year-old. “But it isn’t the same starting from the first or second row as from the third or fourth row. It’s completely different. It’s true that most of this year, during the first laps, I gain a lot of positions, because it’s one of my strong points and I need to take profit from it.

“But we need to improve our speed because the further in front you start the easier everything becomes.

“We struggle more on fast laps, and I’m more or less able to have good race pace now. You have to stay with the front group in the early laps because if you lose them you lose the race.

“The struggle in the fast lap is because of the shoulder because with the new tyre everything becomes more physical. When you have a lack of grip, you have some movement and everything is softer. You have to ride smoother. But in a fast lap with very high grip, everything is more aggressive and that’s where I’m still struggling. I can’t take the profit of a new tyre.” 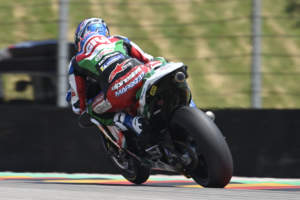 But while he might be downplaying his chances of a victory this weekend regardless of where he qualifies, there’s one person who is adamant that it’s his best chance since the Sachsenring for a second victory – his little brother and fellow Honda MotoGP rider Alex.

“If I needed to put money, I would put it on Marc,” said the LCR Honda rider ahead of the weekend.

“So, I think it’s the correct one, before coming here, to put on him. I think he’s really close – okay, he did some mistakes in the last races, but I think he’s more close than ever to the level that he was. Just some things need to be polished, but he knows which ones. I saw in the data, from Portimao to here. He’s again making those magic things.”