When control supplier Michelin introduced a new specification of rear tyre at the start of the 2020 MotoGP season, it came as something of a shock to some of the series’ manufacturers – especially to three-time runner up Andrea Dovizioso and his Ducati squad.

Adding much more rear grip, it means that the technique of using the rear brake to slide MotoGP’s longest bike around the corners no longer worked, instead forcing the Desmosedici riders to find a new way of coping.

But with huge resources and a squad within Ducati’s factory set-up devoted solely to analysis of the tyres, no one expected that it would take just so long for the Italian manufacturer to get control of a situation that has run away from it.

Yet that’s the position Ducati still finds itself in, with no light at the end of the tunnel as of yet for the factory squad – despite Dovizioso somehow finding himself leading the championship through top-10 consistency and sheer force of will.

However, while he might well be in control for now, his title campaign is up against the combination of legendary Ducati stubbornness and already-fraught relations between the team and its two departing riders, which seem to be getting worse and not better.

That was highlighted today by team boss Davide Tardozzi’s strong words for Danilo Petrucci, putting the onus for not finding a solution to his problems firmly on the shoulders of the 2021 Tech3 KTM rider.

“Danilo is not happy about the bike, the settings and everything else since the beginning of the year with the new rear tyre,” Tardozzi said.

“We are pretty sure about the problem – he has to modify his riding style and we are trying to help him to understand that and to convince him to do it, but it isn’t so easy.”

And while he understands that some of the change needs to come from what he’s doing differently on the bike, a clearly unhappy Petrucci says that there is more to his problems than just the issues with the tyre.

Describing last weekend’s San Marino Grand Prix as the worst of his six-year career at Ducati, he says that only a change in set-up to make the Desmosecidi less unpredictable has brought him any relief at Misano. 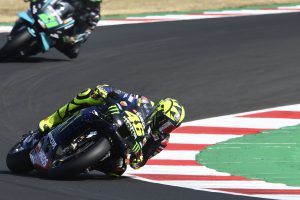 Why Yamaha has been reeled in at Misano
Read more

“Day by day we understood that the bike cannot be the same as last year, especially on braking but especially the reaction from the bike,” Petrucci said. “It is, let’s say, more sensitive to everything you do on the bike. Even just some more braking pressure on the front brake, just some angles of difference in lean and the reaction is very very big.

“You change just one or two bars of pressure on the front brake and the bike reacts really, really differently. But for sure when you have a bike that finished second last week, with Pecco [Bagnaia], it means that for the bike it’s possible to ride faster.

“I just simply say, okay, this is my bike, it’s quite different compared to the previous year’s, and I just want to ride that bike without trying to change the set-up, the electronic set-up, every time to find the solution.

“Today it works, and also for sure the laptime during testing was not good but the feeling was better, and today with race mode we have been faster, much much more compared to last weekend.”

Things aren’t any better on the other side of the garage, either, though, with Dovizioso making it abundantly clear why he won’t be with the manufacturer either next year.

Domenicalli, whose comments two years ago contributed to Jorge Lorenzo’s exit,  committed a ‘faux pas’ of sorts after the San Marino Grand Prix, when he took to social media to congratulate satellite rider Bagnaia on his debut podium – heaping praise on the Italian’s ability to adapt himself to the bike while only congratulating Dovizioso on taking the title lead as an afterthought.

“Very happy for 1st Motogp podium of Pecco!” he wrote. “Incredible comeback after a very severe injury. His fantastic riding style, very off from the bike, helps a lot to be fast also in cornering speed where we often were suffering. Compliments also to Dovi for the P1 in the championship.”

Very happy for 1st Motogp podium of Pecco! Incredible comeback after a very severe injury. His fantastic riding style, very off from the bike, helps a lot to be fast also in cornering speed where we often were suffering. Compliments also to Dovi for the P1 in the championship. pic.twitter.com/U4LRSaASjN

Dovizioso was uncharacteristically blunt when asked about the message by the media yesterday, simply replying: “I don’t think it’s a good idea for Domenicalli to tweet.”

It seems November can’t come soon enough for everyone in the Ducati camp.