Valentino Rossi is ready to extend his time in the MotoGP World Championship with the Petronas Yamaha squad, with the nine-time world champion expected to announce a two-year deal at next week’s opening round of 2020 at Jerez.

Rossi has been in talks with the Malaysian-based satellite team for months while the coronavirus pandemic has halted his chances to test out both his abilities and the capability of Yamaha’s 2020 M1 machine, after initially saying that he wanted to take a number of races to make his decision.

However, it seems the unusual circumstances of 2020 have prompted him to make the call without any track time, with an announcement now expected to come in the next week, before track action kicks off at Jerez for a double-header season opening.

Surprisingly, Rossi is expected to sign for two seasons, aiming to keep racing in MotoGP until at least the end of 2022 and until he turns 43. 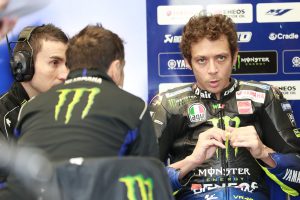 Yamaha boss Lin Jarvis has already pledged his full support to Rossi should he decide to continue, saying when Fabio Quartararo was announced in the factory squad for 2021 back in February there would always be a space for him.

“While we have total respect for and confidence in Valentino’s abilities and speed for the 2020 championship – at the same time Yamaha also have to plan for the future,” he said.

“These days, with six motorcycle manufacturers in the MotoGP class, fast young talents are greatly in demand, and consequently the riders’ market begins ever earlier.

“So, it’s a weird sensation to start a season knowing that Vale will not be in the factory team in 2021, but Yamaha will still be there for Valentino, whatever he may decide for the future.

“If he feels confident and continues to race, we will provide a factory-spec YZR-M1 bike and full engineering support.”

That support looks likely to take the form of a full-factory spec machine within the satellite team, on a similar deal to the one negotiated by Quartararo’s management for 2020.

With MotoGP teams increasingly relying on veteran racers within their satellite teams to lead development – as Honda do with Cal Crutchlow at LCR and like KTM will do with Danilo Petrucci at Tech3 in 2021 – this could be the ideal solution to help Yamaha continue the strong development curve it’s already on.

One question that remains to be answered is what will happen to Rossi’s fiercely-loyal crew, many of whom have worked with him since he graduated to the premier class in 2000.

Petronas Yamaha team principal Razlan Razali told The Race earlier this year there would be space for only two of Rossi’s crew to join the team, leaving the others potentially working with Quartararo in the factory team.

“He’s young, he’s the future of the team, and we have to put a lot of emphasis on him.

“We don’t want Valentino to come and disrupt our structure either though, to come lock, stock and barrel from the factory team.

“We can only allow him to come with one or two guys – he’ll have to work with the rest of our structure beyond that.”

It looks all but confirmed that Rossi will be joined next year by current Petronas Yamaha rider and close friend Franco Morbidelli, with Razali also admitting to The Race in May that the 25-year-old had done enough to secure his spot within the squad too.

51 mins ago IndyCar,Touring Car No Comments