Tito Rabat will make a welcome return to the MotoGP world championship before he’s even had the chance to start his new career in World Superbikes, with the Spanish rider set to be announced as the injured Jorge Martin’s replacement at Pramac Ducati for next weekend’s Spanish Grand Prix at Jerez.

Former Moto2 world champion Rabat had a contract in place with Esponsorama Racing for 2021 until the opportunity to sign Enea Bastianini came along, with the team pushing the 31-year-old aside to make room for the newly-crowned Moto2 champ.

He was offered a lifeline by Ducait in World Superbikes, receiving factory-spec Panigale machinery in the Barni Racing squad. 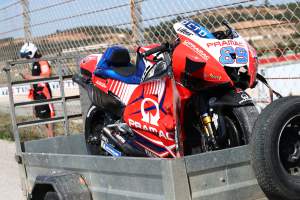 However, with COVID-19 impacting the opening races of the season, the championship has yet to start, meaning Rabat’s appearance at Jerez will come before he makes his debut in the production racing series at Motorland Aragon the following weekend.

Normally Ducati’s go-to stand-in rider for all three of their teams is test rider Michele Pirro, but with an important test booked for Mugello at the same time as the race at Jerez, he will remain on development duties.

The MotoGP wildcard appearance also allows Ducati something of an olive branch to extend to Rabat, after the way his MotoGP career came to an abrupt end last season.

Jorge Martin suffered fractures to his hand and ankle in a high-speed fall during free practice three for last weekend’s Portuguese Grand Prix.

Originally set to undergo surgery immediately to have the breaks repaired, his operation was subsequently delayed due to the concussion he also suffered in the impact.