Both of them were left completely and utterly unable to convert yesterday’s incredible pace – when Yamaha filled the top four places on the grid into results.

Yet despite polesitter Vinales at least managing to salvage sixth in the Misano race, it was satellite Petronas SRT team rider Quartararo who left the weekend the more upbeat of the pair even though he crashed while fighting for the top five and scored no points.

Quick to remind everyone after the race that he is still only in his second year in MotoGP despite his incredible record and his status as a two-time race winner and championship contender, he called the crash a learning experience that will make him stronger. 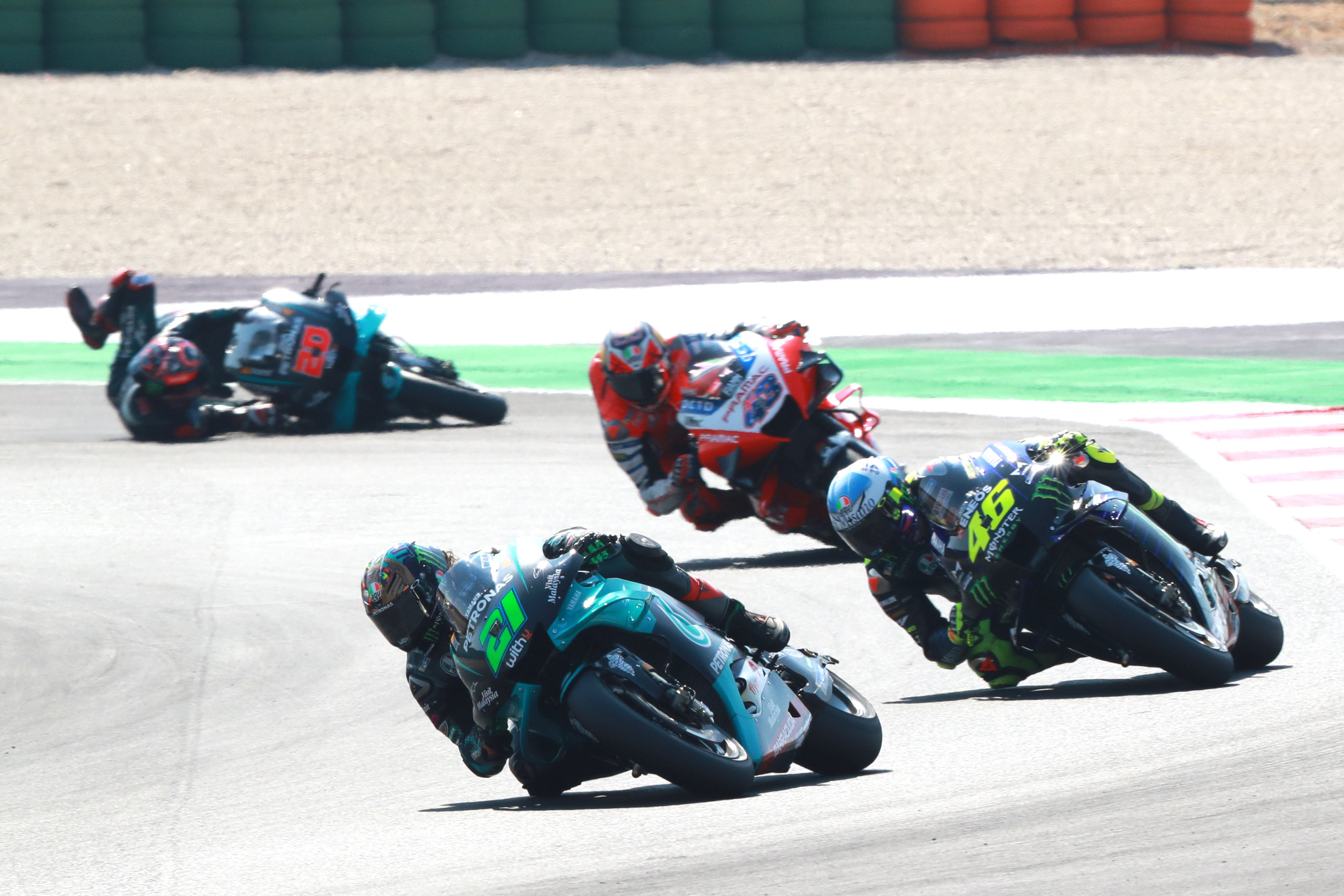 “When I overtook Maverick I knew that I had to push to pass Jack [Miller] – but I pushed like it was the last lap instead of like there were 19 laps left to go and I made a mistake all by myself,” said Quartararo.

“The tyre overheated behind Maverick and I pushed too hard.

“As soon as I passed him, I thought I was free to open the throttle earlier and brake earlier, but the pressure in the tyre was too high.

“But every time I made a mistake last year I learned from it, and I will do the same with this one.

“I’ll watch it back – it’s tough to watch back a race where you’ve crashed, but I have to do it.

“Of course I want to win the title, but I’m 21 years old and I have time” :: Fabio Quartararo

“It’s not the correct moment to make a mistake, but for sure I won’t do the same thing again next week.

“It’s a shame because we had the pace to fight for the victory.

“It’s a strange year – you can be fast, you can have everything, but you can’t buy experience.

“You have to live it to learn it, and I’m sure that even Marc [Marquez] and Valentino [Rossi] are still learning.

“I’m only in my second year and I can’t even imagine the things I still have to learn. 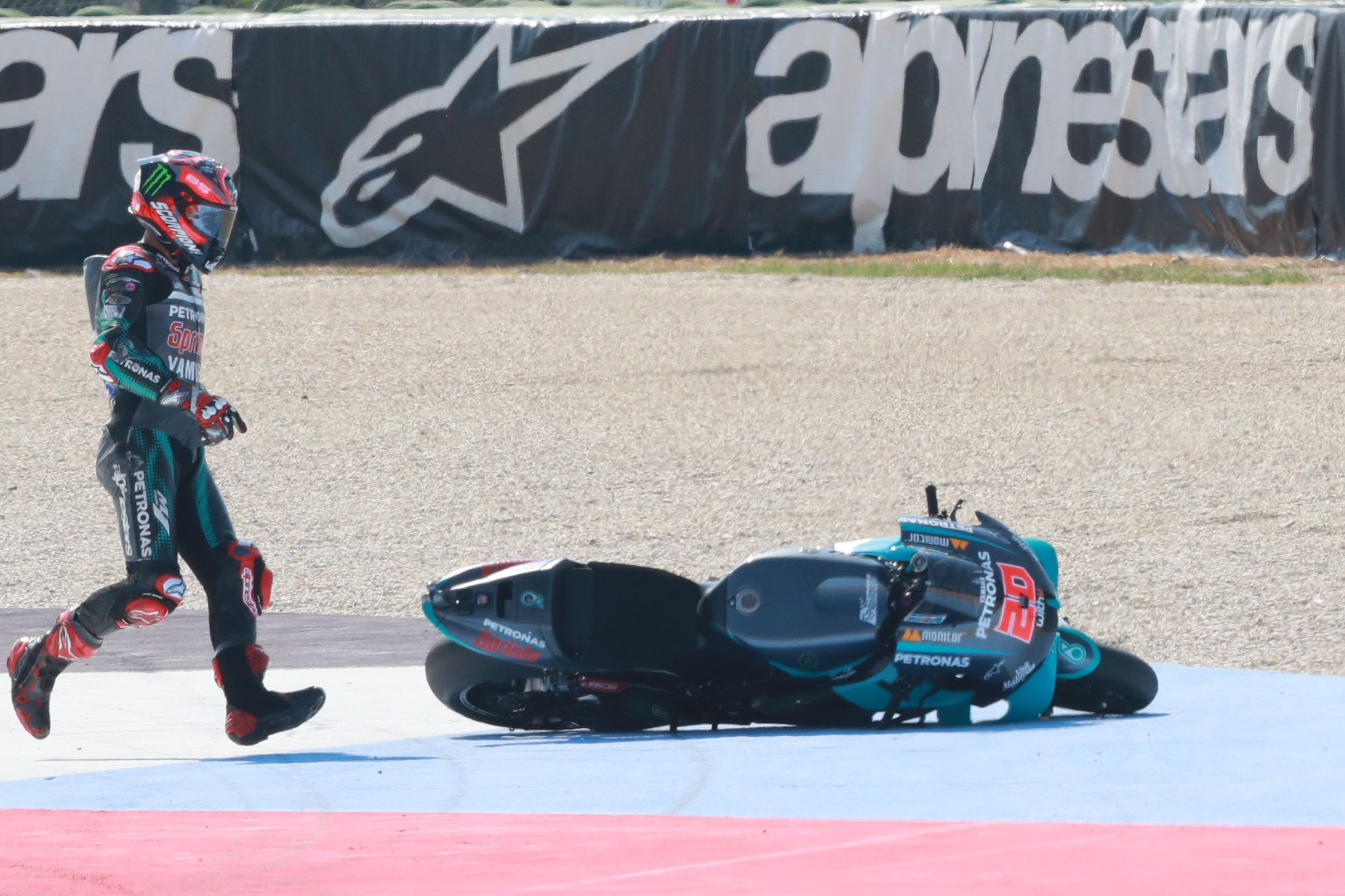 “Today I experienced something when I was behind and faster and wanted to catch them too quickly.

“I was too impatient, because I saw Franco [Morbidelli] and Valentino [Rossi] and didn’t want them to escape.

“Now I know my mistake and I’ll try not to make it again, but it was a good lesson for me.”

Quartararo rejoined after the initial fall but crashed out again later in the race.

The incidents meant he lost his points lead to Andrea Dovizioso, who is now six ahead. 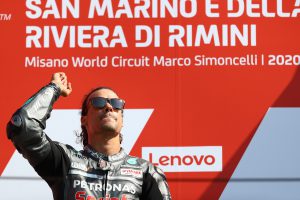 But Quartararo – who had been three in front heading into the race – said the errors wouldn’t change how he approaches the second race in seven days at Misano next weekend.

“Honestly, many people think I have pressure because I’m leading the championship – but I can tell you I really don’t care,” Quartararo insisted.

“I came here wanting to be fast and to fight for the victory, and of course I want to win the title, but I’m 21 years old and I have time.

“Today I just wanted to fight at the front, and you can’t be world champion fighting for fourth and fifth.

“I had the pace and I just got too excited, like you sometimes do when you want something too much.” 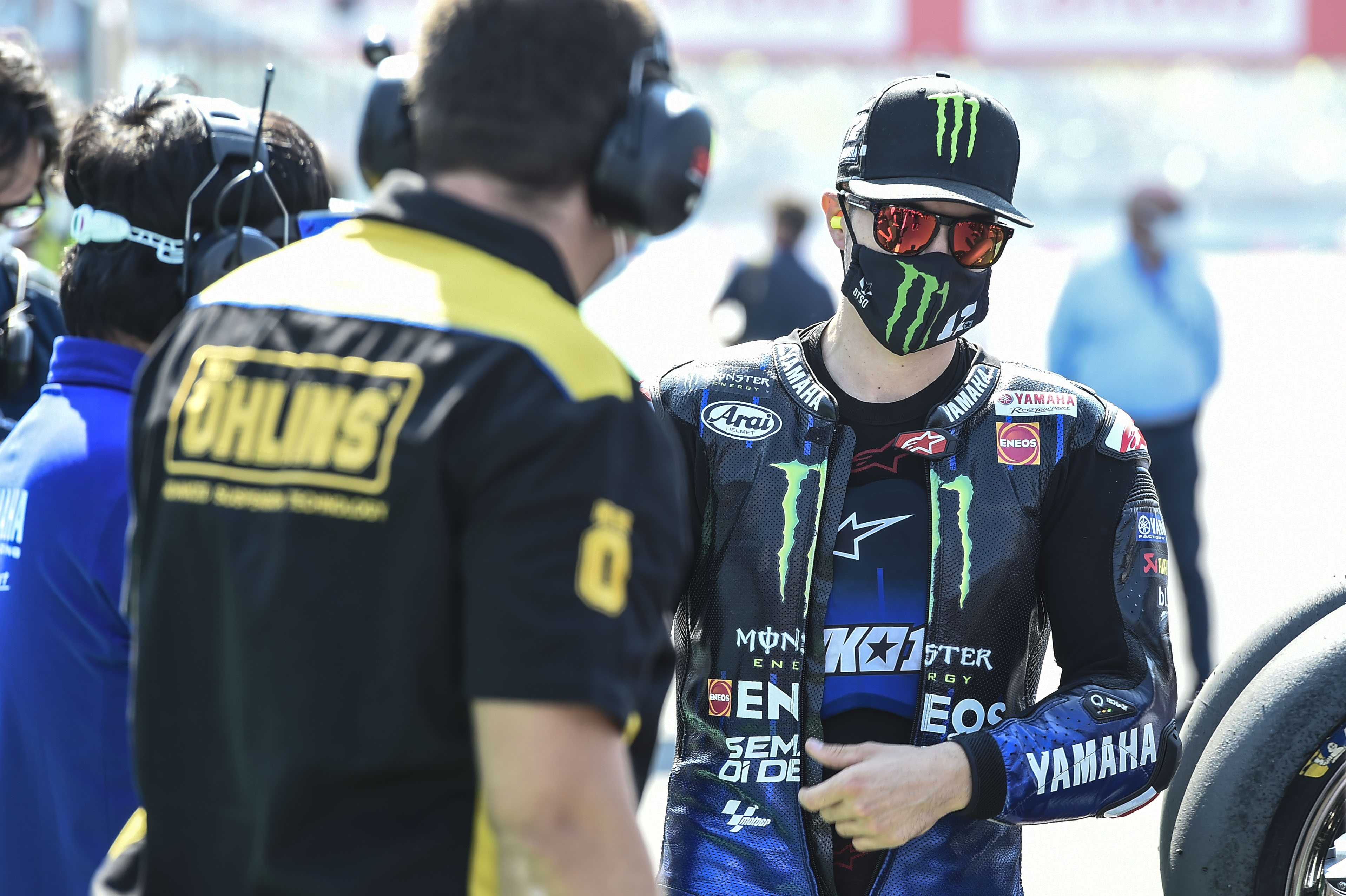 While Quartararo came away from the race with zero points but a clear mind, his team-mate for next year Vinales managed to secure some valuable points in sixth and close the gap to Dovizioso – but was left far more frustrated.

Completely unable to convert his practice pace into a strong showing in the race, he went backwards from pole position as soon as the lights went out and was unable to understand what had gone wrong afterwards.

“I went from setting the lap record to being a chicane on track” :: Maverick Vinales

Vinales was the only rider starting the race on Michelin’s hard rear tyre but track conditions were cooler than on Saturday thanks to more wind blowing in off the Adriatic.

“It’s very difficult to know because in FP1 I set a good time with the hard tyre, and I don’t know what the answer is,” said Vinales.

“It’s more of the same from the past 30 races. The problem is that we don’t have a clear explanation – I went from setting the lap record to being a chicane on track for the others.” 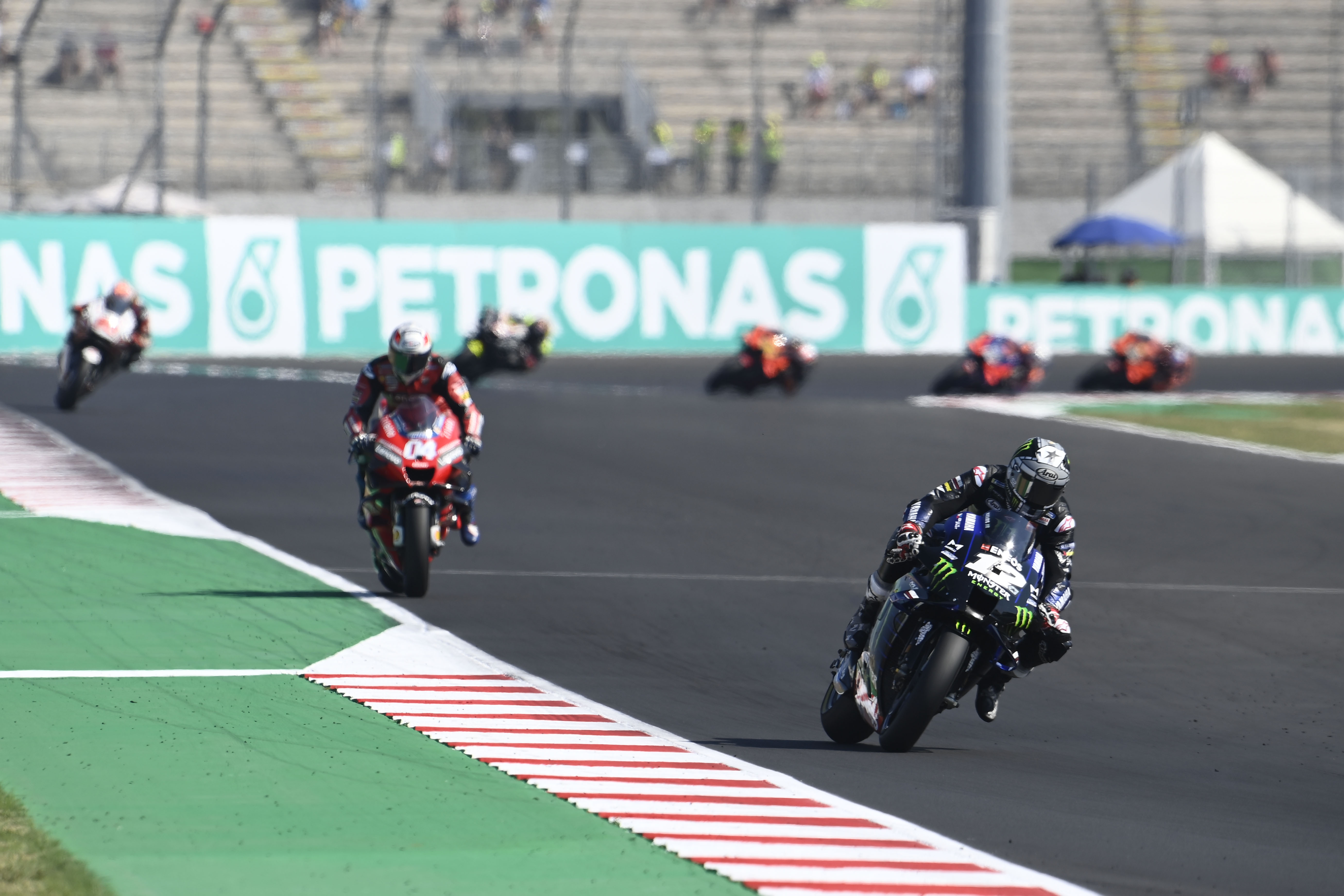 But the performance reflects in part something that has become a Vinales characteristic in his Yamaha years – a complete inability to be flexible and to adapt to changing conditions.

That’s been something of a hallmark of his Yamaha stint, and it was worrying to once again hear him making similar statements after seemingly overcoming the issues in winter testing and the build-up to the delayed 2020 season.

Vinales was able to stay upbeat in recent races despite a particularly tough run of form at Brno and the Red Bull Ring, and even that positivity seems to have deserted him after his disaster at Misano.

“When you need to change your riding style 70 times in one weekend and then arrive at the race to have the same problems it’s difficult,” said Vinales.

“It’s very hard as a rider to believe and to stay motivated.” 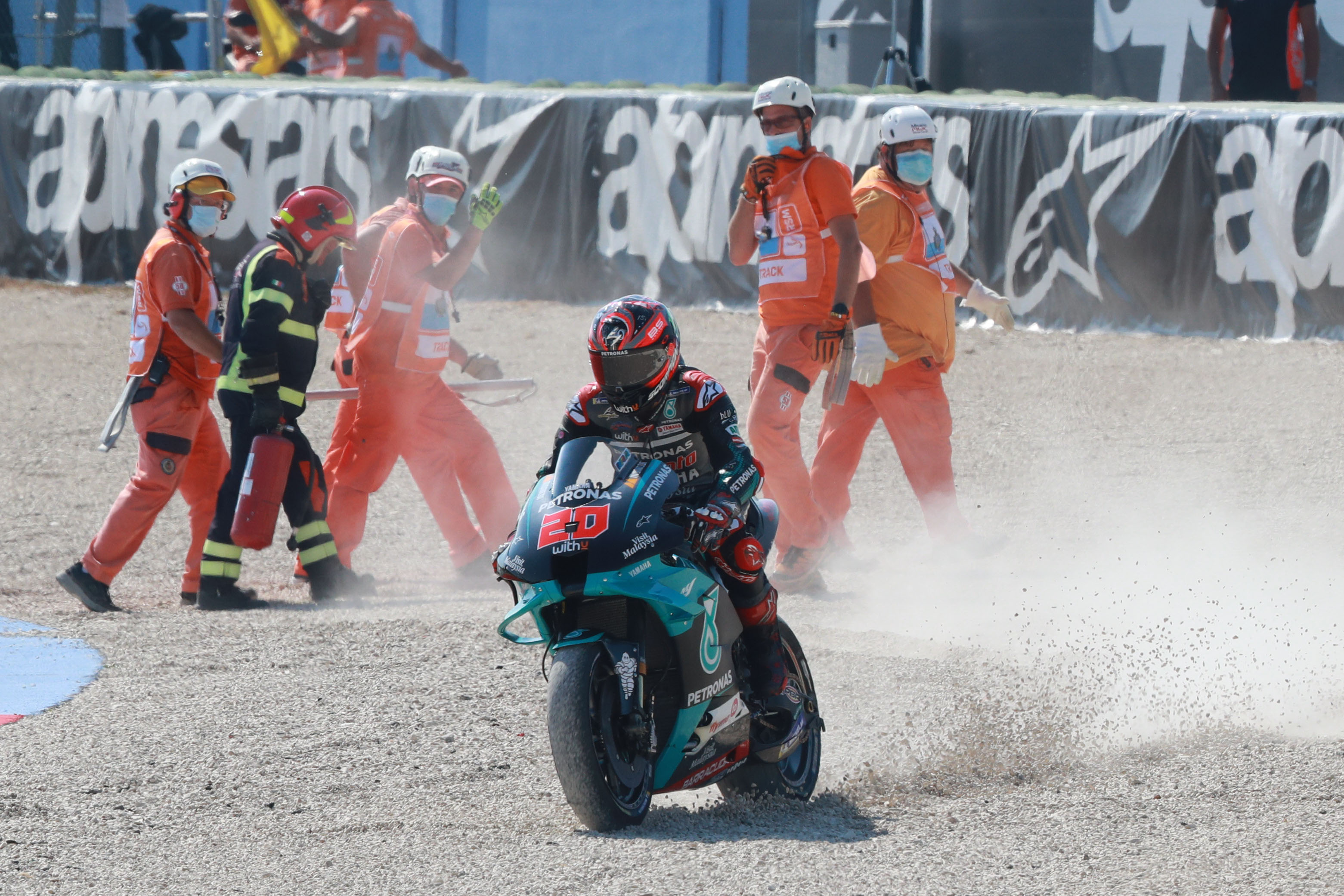